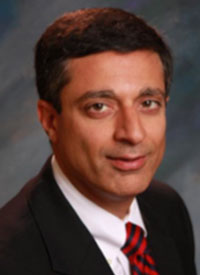 In patients with smoldering multiple myeloma, lenalidomide (Revlimid) induced a 72% reduction in the risk for progression to symptomatic disease at 3 years, according to findings from the ECOG E3A06 study to be presented at the 2019 ASCO Annual Meeting.

“It is pretty clear that many of us would argue that early intervention with a prevention strategy – not a treatment strategy – can reduce the risk of conversion to symptomatic myeloma,” Sagar Lonial, MD, FACP, chief medical officer, Winship Cancer Institute of Emory University, said during a presscast held ahead of the meeting.

He added that – because many issues associated with multiple myeloma can result in irreversible morbidity and, at times, mortality – healthcare providers struggle to identify patients at high risk for progression and also how to intervene by risk stratification.

Therefore, in the randomized phase II/III trial, led by the ECOG-ACRIN Cancer Research Group and sponsored by the National Cancer Institute, the researchers evaluated the efficacy and safety of lenalidomide compared with observation in patients with asymptomatic high-risk smoldering multiple myeloma to determine the reduction in risk and 2-year PFS associated with development of symptomatic disease.

“This is the idea of trying to identify a precursor condition and potentially prevent the development of symptomatic cancer through early intervention, which I think was really a major goal we have had in this field for a long time,” said Lonial, also professor and chair, department of hematology and medical oncology, and Anne and Bernard Gray Family Chair in Cancer.

“Separating the patients at highest risk, and then demonstrating that that intervention can make a difference, is part of what we were trying to do with this trial,” he added.

In phase II of the trial – the run-in portion, according to Lonial – patients received 25 mg of oral lenalidomide once daily on days 1 through 21 for every 28-day cycle, as well as 325 mg of aspirin on days 1 through 28, until disease progression or unacceptable toxicity.

In phase III, 90 patients in the treatment arm received the same treatment regimen, while 92 patients in the control arm underwent observation until progression to symptomatic myeloma. Patients were stratified by their time from diagnosis of smoldering multiple myeloma.

Lonial explained that the reason intervening with an immune-modulatory agent is key in preventing symptomatic myeloma is because of the immune system’s control of the plasma cell clone. “One thought behind this trial is if you use an immune-enhancing drug, such as lenalidomide, you may be able to enhance that immune control and delay or even prevent conversion from a smoldering state to a symptomatic state,” he said.

While the researchers found a 72% reduction in the risk for progression of smoldering multiple myeloma to symptomatic disease with organ damage, they also discovered this benefit was consistent across low-, intermediate-, and high-risk groups – highlighting the potential for future study.

“What is really quite interesting is that each group appeared to benefit almost equally with early intervention with lenalidomide as a single agent, suggesting that while the high-risk group may be the group that we target now, this may be a fertile area for further investigation in the intermediate-risk group as well, which no trial has ever demonstrated benefit for the prevention of smoldering [disease] from developing into symptomatic myeloma,” Lonial said.

In addition, he noted that about 50% of patients had an objective response to lenalidomide in both the phase II and phase II trial. Moreover, in the phase II portion of the study, 78% of the 44 patients enrolled did not progress to myeloma, with a median follow-up of over 5 years.

“With a similar-risk group of patients, one would expect that 50% to 60% of those patients would have converted to myeloma in that same time frame, suggesting that we would have prevented the development of organ damage and symptomatic myeloma in a large fraction of patients – not just in the randomized trial, but also in the smaller portion – and that is occurring with just some adverse events [AEs],” he added.