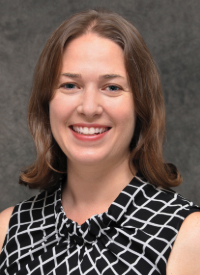 Politi, who is an associate professor of pathology at Yale School of Medicine, emphasized that much remains unknown about the nature and evolution of aberrations in EGFR-mutant disease. She noted that T790M is the most prevalent acquired EGFR resistance mutation in patients who receive first- and second-generation TKIs. That picture is changing now that osimertinib (Tagrisso), which targets T790M, has moved into the frontline setting.

“We’re really in the initial stages of beginning to understand the mechanisms of resistance to third-generation tyrosine kinase inhibitors when these are used in the first-line setting and in the second-line setting,” Politi said. “Even with all these improvements in the treatment of EGFR-mutant lung cancer, resistance is a major impediment to cures.”

She said osimertinib represents an important step forward in the treatment paradigm. The drug was initially approved in 2015 for patients with metastatic T790M mutation–positive NSCLC. In April 2018, the FDA expanded its indication to include first-line therapy for patients with metastatic disease whose tumors harbor EFGR exon 19 deletions or exon 21 L858R mutations.

Besides acquired T790M mutations, resistance mechanisms to TKI therapy include MET or HER2 amplifications, MAPK/PI3K pathway alterations, histologic transformation to small cell lung cancer or epithelial–mesenchymal transition, and oncogenic fusions. With osimertinib therapy, new resistance mutations have been identified. These include C797X, L718Q, and G724S after both first- and second-line osimertinib; additional mutations in G796X and L792X have been found after second-line therapy.

However, Politi noted that knowledge about TKI resistance mutations is incomplete. “One of the first things that we have to do is really identify all the mutations and mechanisms that are on-target mechanisms that can confer resistance to osimertinib,” she said. “We need to understand the relationship between the baseline EGFR mutation and resistance mechanisms.”

One novel antibody that is showing early signs of efficacy in this arena is JNJ-61186372, a bispecific antibody that targets EGFR and cMET receptors. Following Politi’s presentation, Eric B. Haura, MD, reported the latest findings from an ongoing first-in-human phase I study (NCT02609776).2

The study, which seeks to enroll 345 participants, is being conducted in 2 stages. Part 1, which sought to establish the appropriate dosage, recruited patients with metastatic or unresectable NSCLC who have progressed after receiving prior therapy or are ineligible for or unwilling to undergo other therapeutic options.

In Part 2, patients are required to have an EGFR activating mutation. They are being channeled into 4 cohorts depending on whether they have received prior EGFR TKI therapy and on their mutations. Patients are receiving either 1050 mg or 1400 mg of JNJ-61186372 administered intravenously once a week during the first 28-day cycle and once every 2 weeks during subsequent cycles. JNJ-61186372 elicited a response rate in 30% of 108 participants with diverse primary and secondary EGFR mutations who received the therapy in doses ranging from 700 mg to 1400 mg, said Haura, a senior member in the Department of Thoracic Oncology, Moffitt Cancer Center and Research Institute. All responses were partial responses (PRs).