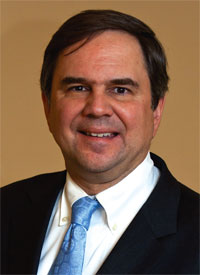 Results from the international phase III RANGE trial showed an improvement in PFS of 1.31 months and a near doubling in the objective response rate (ORR) by adding ramucirumab to docetaxel,1 lead investigator Daniel P. Petrylak, MD, said at the 2017 ESMO Congress.

“RANGE is the first phase III trial to demonstrate a PFS advantage over chemotherapy alone in platinum-refractory advanced or metastatic urothelial carcinoma,” said Petrylak. Further, the combination of ramucirumab and docetaxel did not result in significant additive toxicity or compromise quality of life compared with placebo plus docetaxel. Therefore, the combination represents a new treatment option for this patient population, he said.

Chemotherapy represents the standard of care for patients with metastatic urothelial cancer but, “unfortunately durable survivals are not common; about 5% of patients can survive 5 years with systemic chemotherapy. Thus, second-line treatment options are needed,” said Petrylak. “Chemotherapy itself is a second-line treatment; it generally gives a median survival of about 7 months. In the laboratory, we found that ramucirumab, which targets VEGF-R2, has activity in combination with docetaxel.”

Response rates with immune therapy are in the range of 15% to 21%, and for many patients, progressive disease is the best response. “We don’t have other therapeutic options for patients who have failed checkpoint inhibition therapy or for patients who may not be eligible for checkpoint inhibition therapy,” said Petrylak, professor of medicine and urology, Yale School of Medicine and Yale Cancer Center.

The combination of ramucirumab and docetaxel displays synergy, doubling PFS compared with docetaxel as second-line treatment in an open-label phase II study of patients with locally advanced or metastatic urothelial carcinoma.2 The phase II study was used as the basis for the RANGE trial, in which 530 patients were randomized 1:1 to ramucirumab (10 mg/kg) combined with docetaxel (75 mg/m2 intravenously) or placebo plus docetaxel. Docetaxel was limited to 6 cycles, with up to 4 additional cycles allowed after trial sponsor approval.

Patients enrolled had locally advanced or unresectable metastatic bladder cancer that progressed within 14 months of prior chemotherapy, either a cisplatin- or carboplatin-based regimen. Patients were permitted to receive 1 prior immune checkpoint therapy—7% in the experimental arm and 10% in the docetaxel monotherapy arm received prior checkpoint inhibitor therapy.

Most patients enrolled had poor prognosis—61% had at least 2 adverse prognostic risk factors at baseline, noted Petrylak, “so this is a sick group of patients.”

Median follow-up in the full intent-to-treat population was 5.0 months. Median PFS as assessed by the investigators, the primary endpoint, was 4.07 months with the combination therapy compared with 2.76 months for patients who received docetaxel alone (HR, 0.757; P =.018). By independent blinded assessment, median PFS was 4.04 months versus 2.46 months in favor of ramucirumab/docetaxel (HR, 0.672; P = .0005).

At 1 year, by investigator assessment, 11.9% of patients randomized to ramucirumab and docetaxel were without progression versus 4.5% of those assigned to docetaxel alone. The corresponding percentages at 1 year by independent blinded assessment were 8.3% versus 5.1%, again favoring the combination. PFS outcomes were consistent across a variety of patient subgroups.

There was an approximate doubling of the objective response rate with combined ramucirumab and docetaxel versus docetaxel alone (24.5% vs 14.0%) and a tripling of the complete response rate (4.2% vs 1.4%). “The ORR in my mind is clinically significant and practice changing,” Petrylak said.

Despite administration of a second drug, there was no degradation in quality-of-life scores measured using either the EORTC QLQ-C30 Global Quality of Life or the EQ-5D-5L Index.

Toxicities were similar between groups, with slightly less anemia with ramucirumab/docetaxel (16%) compared with placebo/docetaxel (24%), including grade ≥3 anemia (3% vs 11%).