Dr. Park on the Benefit of Trastuzumab Deruxtecan in HER2+ Breast Cancer
Conference Coverage > 2017 ESMO Congress > 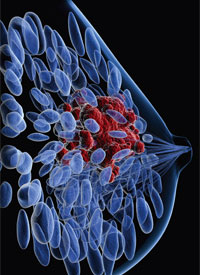 Taselisib added to standard letrozole (Femara) improved the objective response rate (ORR) compared to letrozole with a placebo in postmenopausal women with estrogen receptor-positive (ER+) and HER2-negative (HER2-) early breast cancer, according to findings from the LORELEI study presented at the 2017 ESMO Congress in Madrid, Spain.

“LORELEI is the first randomized study to demonstrate a significant increase in objective response rate upon treatment with a PI3K selective inhibitor in this population of patients,” said Cristina Saura, MD, head of the breast cancer program at Vall d’Hebron University Hospital, Vall d’Hebron Institute of Oncology in Barcelona, Spain, who presented findings from the phase II LORELEI trial (NCT02273973) of neoadjuvant letrozole plus taselisib compared to letrozole plus placebo in postmenopausal patients with ER+/HER2- early breast cancer.

The primary endpoints were the ORR by centrally assessed breast MRI and pathologic complete response (pCR), defined as the rate of tumor eradication from both breast and lymph nodes (ypT0/is N0) at date of surgery, in all randomized patients and in patients with PIK3CA mutated tumours. The study was considered positive if either of the endpoints was met.

“Breast MRI is more accurate than clinical palpitation, ultrasound, or mammogram for prediction of residual disease,” according to Saura.

The trial, which aimed achieving at tumor shrinkage prior to surgery, randomized 166 patients letrozole plus taselisib at 4 mg given on 5 days with 2 days off in a weekly cycle, and 168 to letrozole plus placebo for 16 weeks.

“We were able to detect a reduction in tumor size after only 16 weeks of treatment, compared to patients who received letrozole plus placebo. Any decrease in tumor measurements is something positive for patients because this means the drug has had activity against their tumor in a short period of time,” Saura commented.

No significant differences in the pCR rate with the taselisib/letrozole combination compared to letrozole/placebo were observed in the overall patient population or in the PIK3CA mutated subset, respectively (OR, 3.07; P = 0.370; and OR, NE; P = 0.480, respectively).

“The low pCR rate with taselisib was not unexpected with only 4 months of endocrine-based therapy in patients with ER+/HER2- early breast cancer,” said Saura.


Taselisib differs from other PI3K inhibitors since it degrades mutated p110 alpha by a unique mechanism of action and provides enhanced activity against PIK3CA-mutant cancer cells.

“The alpha-specific story is important, because other PI3K inhibitors have had only a small effect, and the benefit-risk ratio was less favorable,” noted Sibylle Loibl, MD, Chair of the German Breast Group and an ESMO commentator. “In general, it is believed that alpha-specific inhibitors will be more efficacious and less toxic than others”.

One sudden death occurred in the taselisib arm that was considered unrelated to the study treatment. Dose reductions were made in 11.4% of patients, and 10.8% of patients discontinued taselisib.

“The main message is that LORELEI met its primary endpoint and, even though all patients seem to derive some benefit from taselisib, those who had PIK3CA mutation seemed to derive more benefit,” Saura pointed out. “We are performing comprehensive biomarker analyses to provide further insight into the antitumor responses observed with the taselisib/letrozole combination.”