Looking Forward to a New Wave of Breast Cancer Therapies

Dr. Hamilton on the Evolution of Treatment in HER2+ Breast Cancer 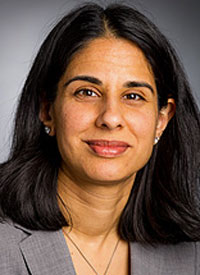 A third randomized cohort received abemaciclib and trastuzumab without fulvestrant, which led to outcomes similar to the trastuzumab-chemotherapy control group, as reported at the 2019 ESMO Congress.

“This is the first randomized study of a CDK4/6 inhibitor and endocrine therapy with trastuzumab, compared to chemotherapy and trastuzumab, in patients with advanced hormone receptor [HR]-positive, HER2-positive breast cancer,” said Sara Tolaney, MD, Dana-Farber Cancer Institute in Boston, Massachusetts. “The study demonstrated that in a heavily pretreated population, the combination of abemaciclib with fulvestrant and trastuzumab led to a statistically significant improvement in both progression-free survival and the objective response rate, compared to chemotherapy and trastuzumab.

The rationale for clinical evaluation of abemaciclib-fulvestrant in HR-positive, HER2-positive breast cancer included in vivo evidence that CDK4/6 inhibition by abemaciclib enhanced activity of HER2-directed agents. Additionally, combined inhibition of CDK4/6 and HER2 had synergistic activity in a preclinical model of resistance to HER2-directed therapies.2

The evidence led to the development of an international, multicenter phase II randomized trial of abemaciclib and fulvestrant in pretreated HR-positive, HER2-positive advanced breast cancer. Eligible patients had received at least 2 prior HER2-directed therapies for advanced breast cancer, including required exposure to T-DM1 and a taxane. Patients previously treated with a CDK4/6 inhibitor with fulvestrant were not eligible.

Abemaciclib and fulvestrant with trastuzumab led to an objective response rate of 32.9% versus 13.9% in each other 2 groups (P = .0042 versus control group). Similar results emerged from an analysis limited to patients with measurable disease (36% versus 16% for the other 2 groups, P = .0111).

An exploratory analysis of overall survival (OS) showed an early trend in favor of both abemaciclib groups. The median OS was 24.33 months with fulvestrant, 24.07 months without fulvestrant, and 21.50 months with trastuzumab and chemotherapy. Tolaney said the final OS analysis is not expected to occur until 2021.