Dr. Rosenberg on the KEYNOTE-045 Trial in Advanced Urothelial Cancer

Chemo With or Without Veliparib Active in BRCA/PALB2+ Pancreatic Cancer 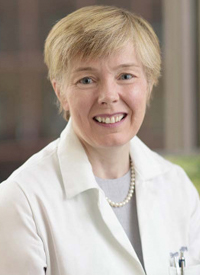 The combination of gemcitabine plus cisplatin with or without veliparib is highly active in patients with pancreatic ductal adenocarcinoma (PDAC) and a germline BRCA/PALB2 mutation. In a randomized, multinational phase II trial, both combinations exceeded the prespecified threshold for response rate, with higher rates of grade 3/4 hematologic toxicity observed with the triplet compared with the doublet, Eileen M. O’Reilly, MD, said at the 2020 Gastrointestinal Cancers Symposium.1

The overall response rate (ORR) in the patients randomized to the veliparib plus chemotherapy triplet was 74.1% compared with 65.2% in the patients receiving the gemcitabine/cisplatin doublet (P = .55),1 O’Reilly, director of Medical Initiatives at the David M. Rubenstein Center for Pancreatic Cancer Research, and section head of Hepatopancreaticobilary & Neuroendocrine Cancers at Memorial Sloan Kettering Cancer Center in New York, said during the meeting. The disease control rate was 100% and 78.3% in the 2 arms, respectively (P = .02).

“We saw encouraging progression-free survival [PFS] in both arms, and if you reference an unselected population, that [PFS] would be about 5 to 7 months,” O’Reilly said. “The combination came at the expense of more hematologic toxicity, with more anemia, thrombocytopenia, and neutropenia, and more dose reductions and delays; although the dose intensity in both arms was relatively similar over time.”

Findings were published simultaneously in the Journal of Clinical Oncology.2 In the published paper, O’Reilly and colleagues concluded that the data “establish cisplatin and gemcitabine as a standard-of-care regimen in germline BRCA/PALB2+ pancreatic ductal adenocarcinoma.”

Five to 7% of patients with pancreas cancer have a germline BRCA/PALB2 mutation, she said. These genes code for proteins critical for homologous recombination repair of DNA. “Previous work identified that cisplatin, gemcitabine, and veliparib had a high response rate and an encouraging survival signal, prompting this study,”3,4 O’Reilly said.

Both arms in the study were considered experimental. In the triplet arm (n = 27), patients received cisplatin 25 mg/m2 plus gemcitabine 600 mg/m2 on days 3 and 10 and veliparib 80 mg twice daily on days 1 through 12, all given for 3 weeks, with an option for veliparib maintenance. In the doublet arm (n = 23), cisplatin and gemcitabine were given at the same doses as in the triplet arm on days 1 and 8 of each 21-day cycle.

Reasons for choosing cisplatin and gemcitabine as the chemotherapy backbone include that cisplatin is very active in BRCA-mutated pancreas cancer, O’Reilly said. “These are the only prospective randomized data we have with platinum-based therapy in germline-mutated pancreas cancer; I think it comes with a high level of evidence. Nonetheless, I also think that FOLFIRINOX [leucovorin, fluorouracil, irinotecan, and oxaliplatin] is an option. [The chosen therapy] will probably depend on the patient in front of you because there certainly are some lack of toxicity advantages. For the most part, cisplatin and gemcitabine is a well-tolerated regimen.”

In the combined population, 42 patients (84%) had stage IV disease, 24% had a BRCA1 mutation, 70% had BRCA2 mutation, and 6% had a PALB2 mutation. Metastasis to the liver was identified in 74%. Demographics were well balanced between the arms.