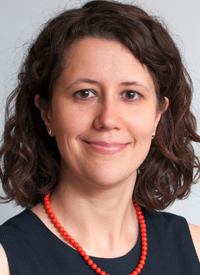 Initial results showed that frontline osimertinib reduced the risk of disease progression or death by 54% compared with erlotinib or gefitinib in this patient population. The median progression-free survival (PFS) was 18.9 months (95% CI, 15.2-21.4) with osimertinib versus 10.2 months (95% CI, 9.6-11.1) with standard therapy (HR, 0.46; 95% CI, 0.37-0.57; P <.0001).2 These preliminary data led to the April 2018 approval of osimertinib in the frontline setting for patients with NSCLC whose tumors harbor EGFR mutations (exon 19 deletions or exon 21 L858R substitution mutations).

“There are a lot of exciting things still to come in EGFR-mutant lung cancer, but for now, the main message is that osimertinib is our preferred first-line treatment,” said Piotrowska, a medical oncologist at Massachusetts General Hospital and an instructor at Harvard Medical School.

In an interview during the 14th Annual New York Lung Cancers Symposium, Piotrowska discussed the role of osimertinib in treating patients with EGFR-mutant NSCLC and how it compares with other therapeutic options in that space.

OncLive: Could you provide an overview of research updates in EGFR-mutant NSCLC?

Piotrowska: The randomized phase III FLAURA trial, which compared osimertinib with erlotinib and gefitinib, showed that osimertinib improved both PFS and OS compared with the first-generation EGFR drugs. The FLAURA trial really establishes osimertinib as a standard of care for newly diagnosed EGFR-mutant patients.

It's important to identify these [EGFR-mutant] patients early, because even if they have high PD-L1 expression, EGFR inhibitors are the mainstay of treatment; there is a risk to starting immunotherapy prior to the results of the EGFR test coming back. We know that immunotherapy is not an effective treatment strategy for patients with EGFR-mutant lung cancer and, additionally, we have also seen that the risks of the EGFR inhibitor can be increased if it is started after immunotherapy. It's important to wait for the testing to return and treat EGFR-mutant patients with the appropriate TKI and not with immunotherapy in the first-line setting.

What ongoing studies in the EGFR-mutant lung cancer space would you like to highlight?

The most exciting data that we saw at the 2019 ESMO Congress was the OS data from the FLAURA trial. Previously, we had seen that FLAURA, which was a randomized phase III study comparing frontline osimertinib with first-generation EGFR inhibitors, was positive for its primary endpoint, which was PFS.

We had eagerly awaited the results of the OS analysis from that study, and at the 2019 ESMO Congress, we saw those results come out. Osimertinib improved OS compared with those older drugs in newly diagnosed EGFR-mutant patients, with a median OS of about 38 months and a hazard ratio of about 0.79. These data really solidify the role of osimertinib as the preferred agent for frontline use in EGFR-mutant lung cancer.

What are the central nervous system (CNS) effects of osimertinib?