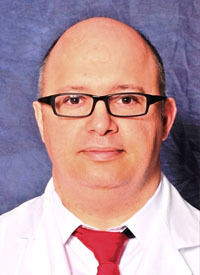 Carfilzomib can be safely combined with melphalan, 200 mg/m2, in a conditioning regimen prior to autologous hematopoietic cell transplantation (HCT) in patients with relapsed multiple myeloma (MM), and single-agent carfilzomib shows promise for post-transplant maintenance therapy in responders to transplant, according to data from a phase I/II clinical trial.

Of the 48 patients who received carfilzomib plus melphalan as a conditioning regimen, the median time for engraftment was 10 days for neutrophils and 15 days for platelets, and there were no dose-limiting toxicities or non-hematologic grade 4 toxicities.

Of the 27 patients who did not have disease progression by 100 days post-transplant, and were started on maintenance therapy with single-agent carfilzomib (given as either 3 or 4 doses over 28 days), 31% had an improvement in response category during maintenance. The interim 12-month progression-free survival on maintenance was 67.5%, said Luciano Costa, MD, PhD, at the 2017 BMT Tandem Meetings in Orlando.

“Carfilzomib as single agent can be safely used as maintenance following carfilzomib/melphalan, and can sustain remission in most of the patients in this high-risk population,” Costa said.

Synergism between proteasome inhibitors and alkylators outside the transplant setting has been demonstrated preclinically and clinically. Autologous HCT in the relapsed setting, including in a second transplant, is usually followed by shorter remissions than in the upfront setting, highlighting the need for post-transplant therapy, said Costa, associate professor of medicine, blood and marrow transplantation and cell therapy program at the University of Alabama, Birmingham. Although post-autologous HCT maintenance therapy with thalidomide, lenalidomide, or bortezomib is well-established in the frontline setting, data on the use of post-autologous HCT maintenance therapy in the relapsed setting are limited.

Carfilzomib used at the conventional schedule is cumbersome; it is typically administered on days 1, 2, 8, 9, 15, and 16 of a 28-day cycle. The dose and schedule for carfilzomib as maintenance has not been determined.

The data presented here were from a 2-phase investigation: a phase I dose-escalation study to determine the maximum tolerated dose of carfilzomib when added to melphalan conditioning for autologous HCT in relapsed MM, and phase II sought to evaluate the anti-myeloma activity and toxicity of the preparative regimen and to determine the safety and patient preference of 2 schedules of carfilzomib maintenance therapy.

Eligible patients had relapsed MM, including those who received a prior autologous HCT. They were required to have at least a minimal response to the most recent line of therapy, including carfilzomib. To be eligible for maintenance, patients could not have had disease progression by 100 days post-transplant. The 2 maintenance carfilzomib schedules were 36 mg/m2 on days 1, 8, and 15 (schedule A), or alternatively on days 1, 2, 15, and 16 (schedule B) for 12 four-week cycles. Patients on maintenance received 2 cycles on each schedule, and then had their choice of schedules for the remainder of maintenance.

Dose-limiting toxicity in phase I was defined as delayed engraftment (>30 days) or any grade 4 non-hematologic toxicities, selected grade- 3 toxicity, or any reaction to the first dose of carfilzomib that precluded a second dose.

There was no dose-limiting toxicity in the phase I or phase II cohort, and therefore the maximum tolerated dose was not reached. The trial proceeded to phase II with the expansion of the last dose of carfilzomib, which was 27 mg/m2 on day 3 prior to melphalan followed by 56 mg/m2 on day 2 prior to melphalan. The main grade 3/4 non-hematologic toxicity during conditioning was infection (38%). Median time to engraftment was 10 days for neutrophils and 15 days for platelets. Two patients had disease progression from pre-transplant to post-transplant. Of the remaining 44 patients, the proportion with very good partial response (VGPR) or better improved from 13.7% pre-conditioning to 59.2% at 100 days post-transplant.

Of the 30 patients eligible for maintenance, 2 had disease progression before day 100 post-transplant and 1 withdrew consent, leaving 27 patients that started maintenance. Nine of these are currently on therapy, and 10 have completed maintenance. Two discontinued due to toxicity (1 with grade 3 congestive heart failure, and 1 with grade 4 acute kidney injury).

Most patients were comfortable with either maintenance schedule. “My impression is that local people prefer weekly because they’re in and out, but for people who have to travel, they prefer every other week…to have fewer trips.”

Of the 29 patients who were eligible for and consented to maintenance, the proportion with VGPR or better improved to 75.8%. “Keep in mind that the study is ongoing, and some of those patients might not have yet reached their best response,” said Costa.
Costa LJ, Landau H, Chhabra S, et al. A phase 1/2 trial of carfilzomib + high-dose melphalan conditioning for auto-HCT followed by carfilzomib maintenance for patients with relapsed multiple myeloma. Presented at: BMT Tandem Meetings; February 23-26, 2017; Orlando, Florida.