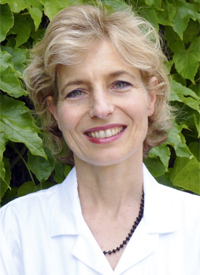 Caroline Robert, MD, PhD
For patients with melanoma, hope lies at the dermatology unit of Institut Gustave Roussy, located in the Paris suburb of Villejuif, France, and considered one of the world’s foremost cancer research centers. There, Caroline Robert, MD, PhD, head of the Dermatology Unit, has made her mark in advancing groundbreaking melanoma clinical research utilizing immunotherapy. Under her leadership, the unit has conducted large-scale international clinical trials, involving more than 800 patients at times, whose results have been astonishing in the field of metastatic melanoma. Some patients have survived beyond 6 years without relapse.

Robert is known for her active participation in clinical trials evaluating the antibodies aimed at the immune checkpoints CTLA-4 and PD-1. Three immunotherapy drugs are now approved for melanoma: the CTLA-4 inhibitor ipilimumab (Yervoy) and the PD-1 inhibitors pembrolizumab (Keytruda) and nivolumab (Opdivo).

In a recent example of her work, Robert and colleagues published 5-year follow-up results of the KEYNOTE-006 study in Lancet Oncology. In the study, 834 patients with advanced melanoma were randomized to receive pembrolizumab at 1 of 2 doses or ipilimumab. The results showed that median overall survival was 32.7 months in the combined pembrolizumab groups and 15.9 months in the ipilimumab group (HR, 0.73; P = .00049).

“It’s not me who invented these drugs, but I am in a position where I can [test] these medicines [at] my hospital and conduct many clinical trials and enroll a lot of patients,” Robert said.

Robert is also known for her work on targeted therapies, such as BRAF and MEK inhibitors.

Melanoma constitutes 2% to 3% of all cancers, and its incidence rate has been doubling every 10 years. Up until 2011, when ipilimumab and BRAF inhibitors were introduced, there was no effective medication for advanced melanoma.

“Now we have other challenges,” Robert said. “We have to understand why [some] patients respond to the medications and why others don’t. This is the focus of my present research in the lab. The story is not finished. It’s much better than what it was before, but we are still not there.”

Before her current position at Gustave Roussy, Robert studied at the Cochin Port-Royal School of Medicine in Paris, where she earned her medical degree in 1990. Robert had residencies in internal medicine, radiology, endocrinology, nephrology, infectious diseases, and dermatology at various Paris hospitals. She then taught graduate-level biological sciences and received board certification in dermatology in 1992.

She became an assistant professor in dermatology at St. Louis Hospital in Paris, followed by 3 years as a research fellow at Brigham and Women’s Hospital in Boston, Massachusetts. After a stint as medical director at Johnson & Johnson Consumer Europe, Robert earned a doctorate in immunology and oncology at Paris-Sud University. She first joined Gustave Roussy in 2001 before attaining the top leadership role at the dermatology unit in 2005.

“With this background, I was well poised to run clinical trials, and we perform many at Gustave Roussy,” she said.

She is a member of various prestigious medical boards and served as chair of the Melanoma Group of the European Organisation for Research and Treatment of Cancer from 2014 to 2017.

In her productive career, Robert has written more 250 papers for peer-reviewed science journals; she has 4 patents in her name related to cancer treatment.

Besides her Giants of Cancer Care® award, Robert received the Legion of Honor, France’s highest merit award for civilians and military officials, in 2014, and the Prix Fondation ARC Léopold Griffuel Award, one of the most prestigious awards for translational and clinical investigation in oncology, in 2018.

Robert’s impact is felt not only in research, but also in her relationships with her fellow doctors.

“I have worked with Professor Robert since 2013,” says Celine Boutros, an oncologist at Gustave Roussy “Over the years, I have discovered how great this lady is. She has the perfect balance between her professional and personal life. From a scientific and medical perspective, she strives to achieve high expertise and considers the patient to be her priority. She is a leader in making her vision a reality. She is able to properly guide, coach, motivate, and engage her medical and research team members.

“She introduced to France the crucial treatments that revolutionized the management of melanoma,” Boutros adds. “The contribution of Professor Robert to cancer treatment through clinical trials and scientific research is saving countless lives.”

Robert has a jam-packed day that starts at 6:15 am. She takes the train with her youngest daughter, a high school student. From her terminal station, Robert either walks or bikes to the hospital. Half her time is made up of research and the other half sees her engrossed in clinical work that involves talking with and examining patients. On her research days, she has meetings with her colleagues to see how patients are doing on certain clinical trials.

The days are broken up by spending time with her colleagues in a salle de garde, a time-honored French tradition dating to the mid-19th century. It’s a special lunch room for doctors and residents where they can eat and relax.

“It’s a place [where] you don’t talk about medicine,” said Robert, who takes a quick lunch. “For 15 to 20 minutes, you talk about something else.”

When she’s not working, she reads fiction books, bikes, walks, and travels. Her partner is an avid traveler, and she frequently meets him. During a trip to Borneo, they walked through rainforests and saw wild orangutans. She also loves China, Japan, Vietnam, and Iran, and visits Italy quite often.

Robert has 3 daughters. The eldest daughter is a trained economist who frequently collaborates with researchers at Columbia University, her middle daughter studied political science and is interested in working in public health, and her youngest is an accomplished high-school volleyball player possibly interested in following her mother’s footsteps into medicine.

“I try not to influence them too much. They are at the age where they have to choose what they want to do. It’s so difficult,” said Robert about career paths. She herself would have gone into political science if not medicine.

When she could, she worked from home while raising her daughters. Weekends, however, were reserved for family.

“I never felt it was difficult to have kids and work a lot,” says Robert. “It’s a matter of letting the kids know they are your priority. If they call me, I will always answer.”

Robert tried to make sure her time with them was rich and meaningful. But for the times when she could not there, her children learned how to do some household tasks by themselves, she said. “My kids tell me they did not suffer. They are very proud of me,” she said. “But I am a little sad when I travel and I can’t see them.”

When younger doctors, both men and women, approach her for advice about how to have a rewarding career and a family, Robert points to her own children.

“It is possible,” she says. “We have to raise our kids with the idea that they can do important things. It’s a matter of being daring and having imagination.”