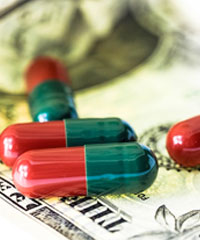 It’s not getting any easier in the oncolytics dispensary business. Just ask Jeff Liticker, PharmD, of UT Southwestern Medical Center. Not only are drug prices soaring with the arrival of many new therapies, but competition for the drug dispensing and drug infusion business is on the rise, he said in a recent talk about oncology drug issues sponsored by the Association of Community Cancer Centers.

In tandem with the outpouring of new drugs, the proliferation of medical information and its adoption by patients have greatly complicated the role of oncology specialists, Liticker explained. “It used to be that the patient would walk into the physician’s office and the physician would say, ‘Here’s the problem. Here’s what needs to be treated,’ and that was the end of it. Now, we’ve got this thing called the Internet, where patients come in and they tell you what their diagnosis is. They tell you what to treat them with, and you spend more time talking them out of that or trying to point them in the right direction. The information exchange or information explosion has really affected patients and what they expect from us,” he said.

As medical dependency grows longer with the arrival of newer, more powerful therapies, patients often outlive the money they have available for health conditions. “We’re really looking at the way patients are progressing through this, what they’re expecting, and how much more they’re expect- ing from us,” Liticker said.

On the business side, consolidation has become a factor in cost escalation. Private practices find it harder to profit from drug sales and so they join hospital networks, where mainstays like the 340B Drug Pricing Program add to financial stability. This may provide security for physicians, but it also contributes to higher costs of care. “Hospitals are not cheaper places to treat patients,” Liticker said.

Drug proliferation adds to the dif culties of keeping up in the business of oncology. There are 586 new molecule drugs in the late-phase pipeline, Liticker said, citing information from QuintilesIMS. Very few of those are copycat drugs. They’re all highly targeted, and they illustrate that developing a successful drug innovation lab and selling it once it achieves a breakthrough can be a very pro table form of business. “Those of us who have been around medicine long enough realize the best position you could be in is to create your own little company, come up with a miracle drug, and then turn around and sell that miracle drug company to a Bristol-Myers, Merck, or somebody else.”

From patent to approval, the time involved for drug development fell from 10.25 years in 2013 to 9.5 years in 2015, Liticker said. Meanwhile, the cost of treating one patient with cancer for a year rose from $100,000 in 2012 to $150,000 in 2014. The same phenomenon can be observed by other measures. In 2010, the United States spent almost $16 billion on just cancer drugs alone. That number rose to $38 billion by 2015, Liticker said. Those totals do not include the costs of supportive care drugs. “What are these supportive care drugs costing us, and what’s our estimated 2020 expenditure? In the United States alone, it’s almost $80 billion by 2020 for everything looking at cancer,” he said. “That’s a considerable chunk of change, and guess who the primary payer by 2020 will be for these? CMS or Medicare. So, of course, they’ve got a real hand in making sure we spend less on drugs over the next few years.”

One of the downsides of rapid drug approvals is that considerably less information about adverse events is available at the time the FDA gives its imprimatur for marketing. “We’re looking at almost half the knowledge base when that drug hits the market,” Liticker said. “As trials get designed better, we have fewer patients, so there are fewer reports coming in of side effects. The result is we have patients getting drugs that we don’t know nearly as much about now as we would have 20 years ago.”

In his discussion of hospital revenue streams, Liticker took aim at “percent of bill” charges. “If you look at a hospital charge versus a clinic charge for a drug, oftentimes the hospital charge is 4 to 5 times as much. Why does a hospital charge 4 to 5 times as much for a drug that they can get less expensively than a clinic can? We know that we’re going to pay a dollar for this drug, but if we bill $100 and we get 30% of those bill charges, we’ve made $30 for that $1 drug, so we’ve made a nice little pro t. Who does that hurt? The uninsured and the underinsured to whom we can’t give a discount without giving it to everybody else, so they’re the ones who ultimately have to pay for this, or they don’t come for care.”

Previously, hospitals didn’t want to be in the business of dispensing outpatient drugs. Patients were expected to go to a retail pharmacy for those. Now, hospitals are trying to figure out how they can establish specialty pharmacies so that they can capture extra drug revenue, Liticker said.

With providers working hard to boost pro t margins, payers are pushing back with tightened benefit verification procedures, Liticker said. “It used to be you could call up and say, ‘I’ve got a non–small cell lung cancer patient. Here’s the regimen, here’s the criteria, go for it.’ Now, all of a sudden, you’re having to provide all of the different tumor markers, all of the different genetic studies.” Getting all of those preliminaries done in time to give the patient prompt treatment is becoming more difficult, he said. Payers will explain, “We’re just trying to make sure that what you want to use for this tumor is actually what’s needed for this tumor based on this evidence bucket that’s out there.”

The type of work academic centers do has been changing, Liticker said. Before, patients would be sent to one of these institutions when their options for successful treatment at community cancer centers were running out. Now, academic centers are competing for first-line patients just as aggressively as the community clinics, he said. It also used to be the case that oncologists practicing in academic centers had far more freedom to prescribe than community center doctors. “When you look at the difference in approval criteria, oftentimes what’s needed to get something approved in an academic institution isn’t as rigorous as what’s required for a private practice. “The primary reason is that private practice physicians will feel the financial sting of medicines that go unpaid. “That’s their money or their loss of money.”

At academic centers nowadays, “even though most of the physician salaries are not tied to the income coming in from this prior authorization process or lack thereof, we’re seeing institutions close their doors or at least divest their infusion business because they can no longer afford the medications.”

Liticker sees a problem with some of the pathways and guidelines for treatment that payers are setting up. Occasionally, an expert reviewer who isn’t an oncologist will stand duty as a watchdog on payment decisions. “Pediatricians sitting on a board trying to make decisions for oncology pathways doesn’t make a whole lot of sense,” he said.

A trend that is likely to affect everybody is the growth of the standalone infusion center business. This could drive a lot of infusion out of community practices and into centers that do various other types of infusion, too. This could become a problem for patients who need the specialized care that oncology centers can provide, he said.

Another challenge affecting practices is the movement toward multiple providers and multiple sites of care, particularly with new models of patient-focused care. It’s important for physicians to know whom the patients are seeing and for what reasons. “I don’t know if your patients are better than ours, but our patients aren’t really good at telling us everything that’s happened to them, every place they go, and all the medications involved,” Liticker said.
Printer Printing...