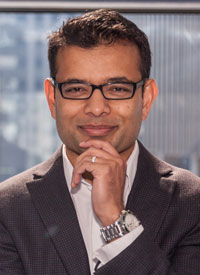 Emerging immunotherapy combinations have offered a strong challenge to sunitinib (Sutent) in the setting of frontline advanced clear cell renal cell carcinoma (RCC). For oncologists, the challenge now is to determine which of these combinations will produce optimal results in the setting of intermediate and high-risk disease, according to a panel of experts who discussed the issue in a recent OncLive Peer Exchange®. In addition, there still appears to be a role for sunitinib among favorable-risk patients. This may be because sunitinib’s role as an angiogenesis inhibitor at this stage in disease progression is more dominant, the panel speculated.

“Research in the field of genitourinary oncology continues to provide us with paradigm- changing data in terms of how we treat our patients with systemic therapy,” said Sumanta Kumar Pal, MD, moderator of the discussion.

The panel shared insights on 3 newly available checkpoint inhibitor combinations for advanced RCC: nivolumab (Opdivo) plus ipilimumab (Yervoy), pembrolizumab (Keytruda) plus axitinib (Inlyta), and avelumab (Bavencio) plus axitinib. The latter 2 were approved in April and May of this year, respectively, and the nivolumab-ipilimumab combination was approved in April 2018. The panel also discussed other immunotherapy combinations under investigation that have potential to alter the RCC treatment landscape.

In clinical trials leading to their approval, all 3 immunotherapy combinations were compared with sunitinib (Table 1).1-6 All were approved in the first-line setting, which has sparked debate on which one is the most effective and for which patients. National Comprehensive Cancer Network (NCCN) guidelines provide some guidance based on risk group (Table 2).7-10

“After we saw the CheckMate 214 data, which showed such a benefit with ipilimumab and nivolumab in intermediate- or poorrisk patients, but not so much in the favorable-risk patients, the NCCN guidelines really changed to reflect the importance of risk stratification,” Tian Zhang, MD, said. “In our clinics, we use IMDC [International Metastatic Renal Cell Carcinoma Database Consortium] risk criteria to risk stratify our patients and get a sense of who has favorable-risk disease versus intermediate- or poor-risk disease with more guarded prognoses.”

Nivolumab/ipilimumab is approved for patients with intermediate- or poor-risk disease and in this setting is considered the preferred option by the NCCN in both the first and subsequent lines.7 It is not a preferred regimen for favorable- risk patients because exploratory analyses showed 12- and 18-month overall survival (OS), objective response rate, and median progression- free survival (PFS) favored sunitinib in the 249 favorable-risk patients included in CheckMate 214, although the complete response (CR) rate was higher with the immunotherapy combination versus sunitinib (11% and 6%, respectively).1

“What I glean from the CheckMate 214 trial is that VEGF TKIs [tyrosine kinase inhibitors] are more active than immune checkpoint inhibitors in good-risk patients,” Neeraj Agarwal, MD, said. “In my view, this is a different disease category, or different disease subtype, within the clear-cell type.”

Zhang elaborated on this point: “Favorablerisk patients may be more dependent on the angiogenesis mechanism and blood vessel formation [and] patients who have more of an inflammatory gene expression signature [may] respond more to the immunotherapy combination.” However, these theoretical disease characteristics must be confirmed before they can be used as biomarkers to guide decision making.

Nivolumab plus ipilimumab is also recommended by the NCCN as an alternative regimen in patients with favorable-risk disease, and the panel agreed there may be a role for it in some of these patients. “I don’t think it’s unreasonable to consider [this] immunotherapy in some of these good-risk patients,” Bradley McGregor, MD, said. “As we’re looking at CheckMate 214 data, [for favorable-risk patients], the PFS and all response rates are improved with sunitinib, but [with the nivolumab-ipilimumab combination] there’s still an impressive [CR] rate in these same patients, much more so than with sunitinib,” he said, indicating this suggests the doublet may be the best option for some patients with favorable-risk disease. He acknowledged, however, that it remains unclear exactly who these patients are but that he would consider this regimen for a favorable-risk patient who has a strong preference for an immunotherapy- driven approach.

Because the nivolumab and ipilimumab combination is associated with significant toxicity, there has been some question whether toxicity could be reduced by administering nivolumab alone and then adding ipilimumab if needed. With the combination, grade 3/4 adverse events occurred in 250 patients (46%) versus 335 patients (63%) with sunitinib. McGregor noted that a critique of CheckMate 214 was that it did not include a nivolumab monotherapy arm; in addition, more than 30% of patients crossed over to immunotherapy after sunitinib.

“There are those patients in whom nivolumab, anti–PD-1 blockade alone, may be sufficient, and we can limit the toxicities of ipilimumab by offering it only to those patients who need it,” McGregor said, noting he is involved in a trial designed to determine the viability of this approach. The trial is the ongoing phase II OMNIVORE study (NCT03203473).11 In the study, participants who respond to nivolumab monotherapy will stop treatment and be closely monitored, whereas those who do not respond will receive ipilimumab to determine whether this agent can yield a response. Additionally, blood and tissue samples will be assessed to determine how certain biomarkers and genes affect outcomes.11

Pembrolizumab or Avelumab: Which is a Better Axitinib Companion?

Both pembrolizumab/axitinib and avelumab/ axitinib are indicated as first-line therapies in patients with advanced RCC. However the NCCN guidelines make pembrolizumab/ axitinib the preferred combination and avelumab/axitinib an alternative recommended regimen across risk groups, based on current data.7 During the Peer Exchange, the panelists emphasized that there are no head-to-head comparisons between these strategies, making it unclear if one is superior. However, they noted some key differences between the populations in these trials, which likely influenced the findings.

“One of the things that struck me was the higher percentage of favorable-risk patients in the pembrolizumab/axitinib trial [KEYNOTE-426]; it was about 31% compared with 23% and 21% in the other 2 trials…and we’re seeing an earlier OS difference also. So I think these favorable-risk patients are really driving the differences we’re seeing in this KEYNOTE trial,” Zhang said. She added that the avelumab/axitinib OS data are not yet mature, making it unclear whether these will show a survival advantage similar to those of the other 2 approved combinations.

McGregor suggested the OS data for avelumab/ axitinib may have been delayed because the trial had been temporarily halted. “The PFS data for axitinib/avelumab are certainly very intriguing. If they bear out, there probably will be an OS benefit, but in more time,” he said.

In the first-line advanced RCC setting, CR rates are especially important because many patients progress rapidly and do not have the opportunity to get through many other lines of treatment. The trials for the 3 approved immunotherapy combinations reported different CR rates, which may be a factor in patient selection for these agents. “Pembrolizumab/axitinib had a [CR] rate around 5.8% compared with avelumab/axitinib, which was right around 3.8%, and then nivolumab/ipilimumab had around 10.2%,” Zhang said.

Based on these CR rates, Agarwal said he would favor using nivolumab/ipilimumab over any of the TKI-immunotherapy combinations. “If we look at axitinib/avelumab or axitinib/pembrolizumab compared with sunitinib, they’re inducing twice as many [CRs]. Look at the ipilimumab/nivolumab combination compared with sunitinib: You have 10 times as many [CRs]. So, if I’m using an immunotherapy regimen [to obtain CRs], I would rather use ipilimumab/nivolumab,” he said.

McGregor suggested, however, that a TKI-immunotherapy combination may be preferable for a very sick patient who is unlikely to receive second-line treatment. “If I’m worried that I only have 1 shot to treat this patient, I think that there’s going to be a role for TKI/[immunotherapy] in those patients. The rates of progressive disease and best response are lower with that than anything else. I think there are those patients for whom you’re going to want to think about giving that combination, for the simple reason that you just cover all your bases,” he said.

Immunotherapy Approaches on the Horizon

Two immunotherapy combinations being assessed in the front-line setting are nivolumab/ cabozantinib (Cabometyx), which is being assessed in the phase III CheckMate 9ER study (NCT03141177), and lenvatinib (Lenvima)/ pembrolizumab, which is being evaluated in the phase III CLEAR trial (NCT02811861).12,13 In both studies, the comparator is sunitinib. In addition, the CLEAR trial includes a lenvatinib/everolimus (Afinitor) arm.13

“The phase I data from lenvatinib and pembrolizumab were obviously incredibly intriguing” McGregor said. “Response rates were something we haven’t seen before— well over 60%.”

The panelists said that adding TKIs such as cabozantinib and lenvatinib to a checkpoint inhibitor has strong potential because these agents are very active and have a variety of off-target mechanisms. “Cabozantinib also hits MET and AXL. In addition to the VEGF receptors, lenvatinib hits a variety of FGFRs [fibroblast growth factor receptors] as well, so it’s certainly a wider approach,” Zhang said. She explained that such mechanisms might prove important to certain subsets of patients, noting that MET, for example, is more prevalent in patients with bone metastases.

Another first-line trial that generated excitement is PDIGREE (NCT03793166), an adaptive phase III trial designed to evaluate whether outcomes with nivolumab can be improved by tailoring treatment based on response.14 All patients will receive nivolumab/ipilimumab induction therapy for 3 months followed by treatment based on their response. Those showing progressive disease will receive cabozantinib, those in CR will receive nivolumab monotherapy, and those without a CR or progressive disease will receive nivolumab monotherapy or nivolumab/cabozantinib. The trial is currently recruiting patients, and Zhang, who is the principal investigator on the trial, said she is hopeful it will show an OS benefit as more effective strategies are layered in.

In their concluding remarks, the panelists noted that although more options are available, the overall prognosis remains poor for most individuals with advanced RCC. “We really need to look at novel targets,” McGregor said. Agarwal stressed the importance of enrolling patients on clinical trials. “Referral for clinical trials and clinical trial accrual remains the most important aspect of my job,” he said.