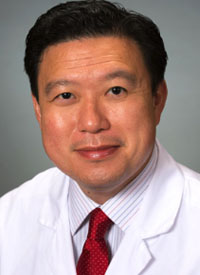 The addition of atezolizumab (Tecentriq) to standard carboplatin and etoposide in the frontline setting significantly prolonged survival in patients with extensive-stage small cell lung cancer (ES-SCLC) compared with the chemotherapy regimen alone.

Moreover, IMpower133 is the first study in 20 years to show a clinically meaningful improvement in overall survival (OS) over the current standard of care in frontline ES-SCLC, according to Stephen V. Liu, MD.

“(SCLC) is a highly lethal disease whose management has largely been unchanged over the past 20-plus years,” added Liu, who is associate professor of medicine at Georgetown University and a member of the trial steering committee. “The majority of patients present with extensive-stage disease, where the first-line standard of care remains carboplatin plus etoposide—a regimen produced in the 1980s.”

The global, double-blind, randomized, placebo-controlled phase I/III IMpower133 trial evaluated the efficacy and safety of first-line atezolizumab as adjunctive therapy to standard of care, combination carboplatin and etoposide, in 403 treatment-naïve patients with ES-SCLC.

Results from the study were presented at the 19th World Conference on Lung Cancer.1 The results were simultaneously published in the New England Journal of Medicine.2

All patients received four 21-day cycles of carboplatin AUC 5 mg/mL/min IV on day 1 and 100 mg/m2 etoposide IV on days 1 through 3. Patients were also randomized 1:1 to receive either concurrent atezolizumab at 1200 mg IV on day 1 (n = 201) or placebo (n = 202) during the induction phase. Treatment was followed by maintenance therapy with atezolizumab or placebo, according to the previous random assignment, every 3 weeks until progressive disease or loss of clinical benefit.

Atezolizumab demonstrated superior 6-month (32.2% vs 17.1%) and 12-month (14.9% vs 6.2%) event-free rates. Lastly, 18 patients treated with concurrent atezolizumab had ongoing responses compared with only 7 patients in the control arm.

Median duration of treatment with atezolizumab was 4.7 months, with a median of 7 doses received. “The addition of atezolizumab to chemotherapy did not affect our ability to deliver 4 cycles of treatment,” Liu noted.

“These data suggest that atezolizumab plus carboplatin and etoposide is a new standard of care for the first-line treatment of extensive-stage small cell lung cancer,” Liu said.

In a follow-up discussion, Natasha Leighl, MD, MMSc, FRCPC, FASCO, Princess Margaret Cancer Centre in Toronto, agreed this regimen should be the new standard of care, pending regulatory and economic thresholds. “With the hazard ratio of 0.70, the tremendous unmet need, and the nearly 4 decades of lack of progress, we have a long way to go to catch up to non–small cell lung cancer, and it starts today.

She added that checkpoint inhibitors may play an important role for SCLC in the future. “It really highlights the urgent need for progress in patient selection, biomarker research, and the need to change our culture of tissue collection and clinical trials. Finally, small cell lung cancer is a preventable disease, and we need urgent steps in tobacco control to help us eradicate this entirely.”