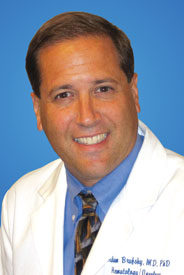 In 2015, the FDA approved the first biosimilar, filgrastim-sndz (Zarxio) for all 5 indications of reference filgrastim. Several biosimilars have since been approved. In September 2017, the FDA approved ABP-215 (bevacizumab-awwb; Mvasi), a biosimilar for bevacizumab (Avastin) for adult patients with colorectal, lung, brain, kidney, and cervical cancers.

Shortly after, MYL-1401O (Ogivri; trastuzumab-dkst) was approved as a biosimilar for trastuzumab (Herceptin) with indications in HER2-positive patients with breast cancer or metastatic gastric/gastroesophageal junction adenocarcinoma in December 2017.

As more of these agents come to market, Brufsky explained that the conversation on biosimilars will take precedence as cancer care becomes increasingly interdependent on the costs of therapy.

In an interview with OncLive, Brufsky, professor of medicine, associate chief, Division of Hematology/Oncology, co-director, Comprehensive Breast Cancer Center, associate director, Clinical Investigation, University of Pittsburgh, discussed the differences between biosimilars and biologics, incentives for biosimilar use, and investigational agents on the horizon.

OncLive: How have you seen the conversation around biosimilars evolve?

Brufsky: It's hard to know, but it's interesting. People are getting more used to them. The conversation is still the way it was a couple years ago. I don't think people really understand exactly what a biosimilar is. It truly has to be similar by very specific FDA criteria; it can't be superior. It has to be the same. That's a conversation we're starting to have more as some of these more sophisticated biosimilars in oncology, such as those for trastuzumab or rituximab come to market. Right now, we have a biosimilar for the G-CSF analog filgrastim-sndz. Fairly soon, we're going to have a biosimilar for pegylated G-CSF, so the conversation is going to get a little more intense as time goes on.

Who needs to address those misconceptions? Is it oncologists themselves?

It can come from pharmaceutical companies, but it really should be coming from oncologists and thought leaders. The people who understand and have experience with getting biosimilars developed and approved are the kind of people who should be doing a lot of this education.

What are the main misconceptions that people have about biosimilars?

The misconception is that they somehow could be superior. Why aren't they superior when you compare them? Why should I use this drug [if it's not superior?] The thing that has to be overcome is that it's not supposed to be superior. If in fact it is superior, it has to go through a different pathway to be approved. That is something that's not as much of a misconception as it is a concept that people need to understand. That is probably the biggest misconception.

People still feel that somehow, biosimilars are “bioinferiors.” How do you know they are really the same? We have all these data and they look kind of the same, but biologics are very complicated. How do we really know? It's getting that degree of confidence to give biosimilars that needs to be reinforced.

Why should a biosimilar be used over a biologic?

Without a doubt, it is price. Why? They're similar drugs. They're biosimilars. They're supposed to be as similar as possible. What other differential is there? Anything that drives down the cost of cancer care is a good thing.

A biosimilar has been projected to be a 30% reduction in cost compared with the originator biologic. Is there potential for more cost differential?

I don't know. The more you have, the more reductions you're going to get if you're competing on price. That's the edge of substitution. Thirty percent is just at the edge. You can't get less than that. Ten percent or 15% is not going to work. It's going to have to be about 25%, 30%, or more. The drive is cost. That's what everybody has to understand. Hopefully, it will drive the originator product down, too, and that's only for everybody's benefit.

Will oncologists be the main decision makers in prescribing a biosimilar over a biologic?

It's going to be a really interesting question. I hope it's going to be collaboration between oncologists, pharmacists, and payers, but I have a feeling the payers will dictate it in some cases. For example, with filgrastim-sndz—the [biosimilar] that we are all familiar with in oncology right now—it is pretty much dictated by the payers. It works just as well as the name brand, as far as I'm concerned. I hope it's a collaboration, but I suspect it will be imposed.

Are there any incentives for choosing a biosimilar over a biologic?

As far as I'm concerned, there is no [incentive] other than that's what the payers require. If you have an integrated health system–either a vertical health system or an Accountable Care Organization–you are going to want to deliver the same amount of care at a lower cost. There is an incentive there.

Can you speak to some of the biosimilars currently being investigated?

They all look pretty good as far as I'm concerned. They look pretty similar though it's interesting that the delay in getting these to market has more to do with the manufacturing process of the biosimilar and the satisfaction of the FDA than the actual clinical data. Clearly, there is going to be a trastuzumab biosimilar [available] next year, and, likely within the next 18 months or sooner, there will be a bevacizumab biosimilar [available]. Biosimilar rituximab is around. There are quite a few.

Where do you think the future landscape of biosimilars is headed?

Someone will make a stab at any fairly sophisticated drug with potential for cost reductions. The real issue here is having processes in place to ensure it's really the same drug [as their biologics]. We are confident in the FDA, but once you get outside of the United States and perhaps Western Europe, I'm not sure regulatory regimes are as strong as they are here. It's going to be interesting to see what happens when these things are marketed outside of the Western countries.

Europe has been a big proponent of biosimilars with a number of approvals. Do you see the United States surpassing Europe in that sense?

I do. The FDA approval process is different than the European Medicines Agency. It's not a question of proponent, but more of a question of the difference in process. Pharmaceutical companies have been a little bit less aggressive in the United States than in Europe.
Printer Printing...