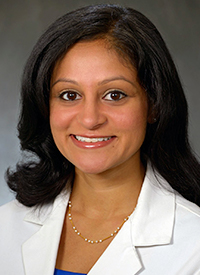 There are now 3 FDA-approved CDK4/6 inhibitors from which to choose from for patients with metastatic hormone receptor (HR)–positive, HER2-negative breast cancer, all showing an extension in progression-free survival (PFS) and objective response rates (ORR) in the first- and second-line settings. Now, they are demonstrating improvements in overall survival (OS) in select populations as well.

All 3 CDK4/6 inhibitors—palbociclib (Ibrance), ribociclib (Kisqali), and abemaciclib (Verzenio)—work by blocking Rb phosphorylation and preventing cell cycle progression from the G1 phase to S phase, said Payal D. Shah, MD, in a presentation during the 2019 OncLive® State of the Science Summit™ on Breast Cancer.

“Fast forward just 5 years and we have so many more drugs of interest, including several new FDA approvals,” she said. “We also have potential biomarkers of response and resistance to treatment that extend beyond just the estrogen receptor, progesterone receptor, and HER2.”

At the meeting, Shah, an assistant professor of medicine at Perelman School of Medicine, Hospital of the University of Pennsylvania, discussed the paradigm shift in metastatic HR-positive, HER2-negative breast cancer, now largely defined by the use of CDK4/6 inhibitors.

All 3 agents have been studied extensively in frontline phase III trials, said Shah, and have shown a consistent PFS benefit when used in combination with antiestrogen therapy.

Furthermore, all 3 agents have shown a trend toward improved OS. At the 2019 ASCO Annual Meeting, data from the phase III MONALEESA-7 trial confirmed the OS advantage of ribociclib and antiestrogen therapy in previously untreated pre- and perimenopausal women.1 At a median follow-up of 42 months, 70.2% of patients who received the combination were alive versus 46% of patients who received anti-estrogen therapy alone (HR, 0.71; 95% CI, 0.54-0.95; P = .0097).

In July 2019, preplanned interim results of the MONALEESA-3 trial also showed that the addition of ribociclib to fulvestrant (Faslodex) significantly improved OS as a first- or second-line treatment for postmenopausal women with HR-positive/HER2-negative breast cancer.2

Prior to these data, CDK4/6 inhibitors were relatively interchangeable, said Shah, and decisions were largely based on adverse events, dosing, copay assistance programs, and provider comfort.

“Now that we have data with ribociclib showing a positive impact on OS for some of our younger patients, these data certainly have to be a point of discussion when we’re seeing a pre- or perimenopausal woman with HR-positive, metastatic breast cancer in the clinic,” said Shah. “It remains to be seen what impact these data will have on practice patterns nationally.”

CDK4/6 inhibitors have also been studied after progression on endocrine therapy. Although the study populations make cross-trial comparisons difficult, each trial overlaps in its demonstration of benefit from the addition of a CDK4/6 inhibitor.

Most recently, data from the phase III MONARCH 2 trial showed that the combination of abemaciclib and fulvestrant resulted in a statistically significant improvement in OS versus fulvestrant alone in women who had been previously treated with endocrine therapy, confirming the survival trend and making it the first CDK4/6 inhibitor to demonstrate an OS benefit in pre/peri and postmenopausal women.3,4

In an analysis of the phase III PALOMA-3 trial, palbociclib in combination with fulvestrant led to a clinically meaningful benefit in OS in patients with HR-positive, HER2-negative advanced breast cancer who had progressed or relapsed on prior endocrine therapy.5

All 3 agents can be distinguished by their toxicity profiles, according to Shah. For example, palbociclib and ribociclib are associated with higher rates of myelosuppression; palbociclib is also linked with neutropenia and ribociclib has led to transaminitis/QT prolongation, respectively. Conversely, abemaciclib carries a higher incidence of diarrhea.

Despite the dramatic improvement in PFS, and now OS, that has been seen with CDK4/6 inhibitors, endocrine resistance remains an inevitable reality.

There have been developments with PI3K inhibitors, given that approximately 40% of patients with HR-positive, HER2-negative breast cancer harbor activating mutations in PIK3CA. Historically, this class of agents has been limited by off-target toxicity or limited efficacy, explained Shah.

Alpelisib (Piqray), however, is a specific inhibitor of PI3K-alpha, which was developed to minimize off-target toxicity and maximize efficacy. In the phase III SOLAR-1 trial,6 postmenopausal patients with PIK3CA mutations were randomized to receive alpelisib and fulvestrant versus fulvestrant alone. The majority of patients had visceral disease, were resistant to an aromatase inhibitor, and few had received a prior CDK4/6 inhibitor.

The safety profile of the combination was categorized by a higher discontinuation rate and incidence of grade ≥3 hyperglycemia, rash, and diarrhea in the trial.

The phase II BYLieve trial (NCT03056755) is also actively recruiting. In this trial, investigators will examine the use of alpelisib in the context of progression on or after exposure to a CDK4/6 inhibitor, said Shah.

For patients with BRCA1/2 mutations, PARP inhibitors have also shown significant activity in the metastatic HER2-negative setting, irrespective of prior exposure to chemotherapy. This was specifically demonstrated in the phase III OlympiAD and EMBRACA trials, which led to the FDA approvals of olaparib (Lynparza) and talazoparib (Talzenna) in patients with germline BRCA1/2 mutations, respectively.

Other areas of interest in the field are AKT inhibitors and immunotherapy.

“In terms of what sequence of therapy makes sense for our patients, there is no right answer currently,” said Shah. “We need more data to determine the answer. However, referring our patients to clinical trials is always a potential option.”

Following progression, interventions of alpelisib, endocrine-based alternatives, clinical trials, and chemotherapy can be considered, she concluded.