Distinguishing Between Frontline Monotherapies and Combos in mRCC
Caroline Seymour 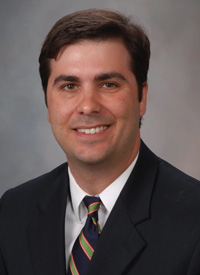 Risk status is now not only a prognostic factor, but the main predictive factor when it comes to guiding treatment selection for patients with newly diagnosed metastatic renal cell carcinoma (mRCC), said Richard W. Joseph, MD.

“The first thing we have to do is recognize disease biology and risk because a favorable-risk patient needs to be treated differently than an intermediate- and poor-risk patient would,” said Joseph. “Other than that, it's hard to give anyone good advice on which regimen to choose because we're still trying to figure that out.”

Just this year, the FDA approved the combination of pembrolizumab (Keytruda) and axitinib (Inlyta) as well as the combination of axitinib and avelumab (Bavencio) for the frontline treatment of patients with advanced RCC. In the pembrolizumab/axitinib study, KEYNOTE-426, the combination demonstrated a 47% reduction in the risk of death compared with sunitinib (Sutent). In the JAVELIN Renal 101 trial, avelumab/axitinib led to a 31% risk reduction in the risk of disease progression or death versus sunitinib.

Among established regimens, such as the combination of nivolumab (Opdivo) and ipilimumab (Yervoy), as well as cabozantinib (Cabometyx) monotherapy and sunitinib monotherapy, the new immunotherapy and VEGF TKI combinations add complexity to an already crowded landscape, explained Joseph. The combination of bevacizumab (Avastin) and atezolizumab (Tecentriq) might be nearing approval as well, he added.

However, Joseph, an internist and oncologist at the Mayo Clinic explained that in the absence of predictive molecular signatures, clinical judgement should be employed to determine the appropriate therapy for patients.

In an interview during the 2019 OncLive® State of the Science Summit™ on Genitourinary Malignancies, Joseph discussed the factors that must be considered when selecting the appropriate frontline treatment for patients with mRCC, the need for clarity regarding the role of cytoreductive nephrectomy, as well as the research that is being done in those with rarer subtypes of kidney cancer.

OncLive: Could you provide an overview of some of the key updates in newly diagnosed mRCC?

Joseph: In the last 5 years, there have been multiple new approvals which have given us many different options to better treat patients. With all these new options, the challenge is trying to figure out which patient should go on which 1 of these new regimens.

How are you selecting frontline therapy? Is TKI monotherapy still a relevant option?

With that being said, the newer combinations certainly play a much bigger role in the intermediate- and poor-risk patients. However, they can also play a role in favorable-risk patients. The decision depends on many factors, 1 of the most important being the goals of the patient. Sometimes we’ll have a younger, healthier patient who really wants to push the limits of therapy and is willing to take on added risk. We'll treat them much differently than perhaps an older patient whose goals might be slightly different.

That's certainly possible. We're still in the early stages of trying to figure out what the long-term outcomes of those regimens are. It's possible some PRs could change to CRs. More importantly, CR is a bit artificial; it may mean a radiographic CR, which we then have to question whether that is really a CR. Are there more patients with CRs who maybe don't necessarily have a radiographic CR? I don't believe we have a really good idea of assessing tumor biology with scans alone. The question right now is whether there are going to be more CRs, but what might be a better question is whether more patients will be off therapy at 5 years who maybe did not have a RECIST CR.

Could research into molecular signatures help inform whether to pursue an immunotherapy-based combination as opposed to VEGF monotherapy?

I wouldn't say [PD-L1] is quite irrelevant, but I would never make a decision based solely on it. Hopefully, 1 day we will have some markers, especially for PD-L1–negative patients, in whom you’re not really sure what to do when it comes to a double immunotherapy combination versus an immunotherapy/VEGF combination. New markers would be helpful; we're just not there yet.

Is the combination of atezolizumab and bevacizumab expected to receive regulatory approval? How could that further complicate the paradigm?

That combination does seem to have a lot of activity. We've seen the results from the phase II and the phase III trial. Although the primary endpoints are still pretty immature, I have a lot of experience with the combination from the clinical trials that were done. I would say that it’s 1 of the more tolerable regimens of the available combinations. The rate of grade 3/4 adverse events tends to be on the lower side with atezolizumab and bevacizumab compared with other combinations, perhaps 40% compared with 50% or 60%, respectively. Perhaps [this combination] will have a role, especially in patients who are frailer and in whom [maintaining a good] quality of life is more of a goal. The CR rates with this combination look pretty reasonable, too. To answer your question, yes, it'll probably get approved. Yes, it will complicate things and make things even more difficult for us [in terms of treatment decisions], but [another option is] always a good thing for patients.

What advice would you give your colleagues who are treating patients with frontline mRCC?

You need to take the patient’s risk status into consideration; that's something that was initially designed to be prognostic, but we're showing that it also can predict biology. Ultimately, you have to use good clinical judgement and try to find other comorbidities that you would want to avoid. If a patient has a cardiac history, you might [want to avoid] anti-VEGF therapy. A recent history of [embolic] clots might push you 1 way. Of course, any soft or hard contraindication to immunotherapy might push you in a different direction as well.

A big question that needs to be addressed has to do with the role of cytoreductive nephrectomy. We know that has been answered in the context of sunitinib in the treatment-naïve setting. We need to take patients who have responded to frontline therapy and randomize them to cytoreductive nephrectomy. Once patients have been stabilized and we know that they're doing well, we’ll know whether removing the kidney leads to better outcomes.

Do you foresee that type of trial being planned?

Yes and no. People have talked about it a lot and everybody wants to do it. At the same time, the challenges from all the previous cytoreductive nephrectomy studies have dampened some of this enthusiasm.

Where should future research focus?

We essentially have 2 classes of drugs right now: immunotherapy drugs and anti-VEGF drugs. We need to look at different mechanisms of action. Many drugs are showing some degree of promise. There are many molecular targets that we're known about for a while but have not necessarily been able to target, including HIF. That is going to be a part of the future as well as looking at some of the rarer subsets so that we can start dividing patients up to receive a more individualized approach. We're still quite a way from that, but that will be the goal.

Could you elaborate on some of these rarer subtypes in kidney cancer?

The second most common kidney cancer is papillary which we’ve had mixed results trying to treat with anti-VEGF therapy, anti-MET-based therapy, and immunotherapy. That is 1 relatively common subtype we need to do more work in. Unfortunately, some of the more MET-specific drugs are not looking as promising as the early studies suggested. We still have a way to go. Chromophobe is another relatively rare subtype. Of course, there’s medullary, which is extremely hard to treat. There are some potential targets there, but it's still too early to get too excited about.
Printer Printing...