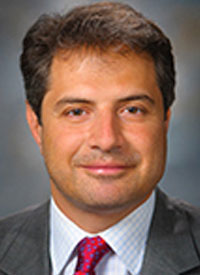 With positive results from agents such as inotuzumab ozogamicin (Besponsa), ponatinib (Iclusig), blinatumomab (Blincyto), tisagenlecleucel (Kymriah), and pembrolizumab (Keytruda), Elias Jabbour, MD, said he believes acute lymphoblastic leukemia (ALL) will be cured sooner rather than later.

“The cure of ALL is going to happen in our lifetime,” said Jabbour, an associate professor of Medicine in the Department of Leukemia at The University of Texas MD Anderson Cancer Center. “These drugs are very promising. The future is to use these drugs, and immunotherapy, in a frontline setting to eradicate minimal disease and increase the cure rate from 40%, to 50%, to 80%.”

In an interview with OncLive®, Jabbour discussed recent clinical trial results in ALL, the role of immunotherapy, and the biggest challenges facing the field.

OncLive: What is the current treatment landscape in ALL?

Jabbour: There are a lot of developments happening today in ALL. We are improving the outcome of this disease. In frontline pediatric ALL, the cure rate is 80% to 90%. The outcome is still not as good in adult ALL, with a cure rate approaching 50%. That has to do with the biology of the disease—it is quite different between pediatric and adult.

With the progress being made in ALL today, we're able to personalize our frontline therapies. [There is] success encountered with tyrosine kinase inhibitors in combination with chemotherapy for FLT3-positive ALL. Today, with ponatinib in combination with chemotherapy, we're approaching a 5-year survival rate of 70% to 75% without the need for transplantation, which is major progress.

The addition of monoclonal antibodies, starting with rituximab (Rituxan), to chemotherapy has shown improvement in survival. For Burkitt disease and precursor B-cell ALL, we have new drugs; among them is the bispecific monoclonal antibody blinatumomab that was approved for relapsed/refractory ALL and [now] for minimal residual disease (MRD)-positive disease as of [March] 2018. We have inotuzumab ozogamicin, which is an anti-CD22 drug conjugated to ozogamicin, which has shown activity in relapsed/refractory disease with improvement in overall survival (OS).

Recently, we had the chimeric antigen receptor (CAR) T cells approved, which harness the immune system of the patients to target the B-cell marker CD19. We've seen good results in a phase II study that led to FDA approval of the drug for patients up to the age of 25 who failed multiple lines of therapy.

There are a lot of things happening today in ALL. The question is, “How can we move these drugs into the frontline setting in order to further improve outcomes, eliminate the need for chemotherapy and intensive chemotherapy, and for further improvement of OS?”

What is the role of immunotherapy in this setting?

One of the novelties in cancer and in ALL is immunotherapy. We try to go after specific targets and spare the normal organs.

Rituximab, by itself, does not work. When you combine rituximab plus chemotherapy, regardless of what chemotherapy backbone you use, you have an improvement in survival outcome. That has become standard of care.

Then we have the CD19 bispecific T-cell engagers. Blinatumomab is the first on that list; the drug was first [applied] in patients with minimal or measurable disease, and later on was taken to the relapsed/refractory setting in 189 patients in a phase II trial that led to approval of the drug with a response rate of 44%.

Later on, there was the randomized TOWER trial where patients who were Philadelphia chromosome–negative failed multiple lines of therapy and were randomized to standard of care or blinatumomab. There was an improvement in response rate and, among responders who had deeper molecular responses, an improvement in OS of 7.7 months compared with 4 months. We had better response in patients who received blinatumomab as the first salvage compared with second salvage and beyond.

In addition, the drug was explored in a larger scale in patients in Europe with minimal disease. In a trial called BLAST, 116 patients were treated. Eighty percent was the complete MRD response rate, and among responders, we saw an improvement in OS and progression-free survival (PFS) compared with patients who did not respond. Based on these findings, the drug was approved by the FDA.

In addition, we have inotuzumab ozogamicin which is an anti-CD22 plus ozogamicin. We explored this drug at The University of Texas MD Anderson Cancer Center on a single-arm trial. We have explored different schedules and reported that the weekly regimen is better, safer, and as effective. That led to a trial called INO-VATE. Patients were randomized to receive either standard of care or inotuzumab ozogamicin given on a weekly schedule. There was an 80% response rate favoring the treatment with inotuzumab ozogamicin compared with 30% for standard of care. There was a high rate of MRD negativity with a high rate of survival as well; we have a survival rate of 23% compared with 10% for standard of care. Based on these data, the drug was approved for patients with relapsed/refractory ALL.

Finally, we have CAR T-cell therapies. We collect cells from a donor, engineer them, and send them back to attack the B-cell marker CD19. This has shown good activity in lymphoid malignancies, chronic lymphocytic leukemia, and ALL; however, here in ALL, we had very good responses. Patients with less disease burden had a better outcome because they had less [adverse events], including cytokine release syndrome and neurologic events. We have seen patients doing well in the long run, mainly those with minimal disease.

There was a trial sponsored by Novartis in collaboration with the University of Pennsylvania called ELIANA. It's a multicenter trial that led to approval in patients up to the age of 25 who have failed multiple lines of therapy.

In the same line of immunotherapy, investigators at Memorial Sloan Kettering Cancer Center explored pembrolizumab in adults with ALL. There was some toxicity, but there were some good responses as well, including some that were durable, mainly in patients with minimal disease.

The field is evolving. We're exploring a new generation of CAR T cells and we're moving into earlier relapses rather than later relapses.

What are the biggest challenges in treating ALL?

These drugs are very effective, but I don't think that using them in [later lines of therapy] is where the money is. We need to use these drugs upfront in the first salvage setting. We're exploring these drugs in a frontline setting because when we can improve outcomes on a larger scale, then we can…try to use them in combination with different agents. For example, with blinatumomab and inotuzumab ozogamicin, there are data showing that we can combine them together with chemotherapy and further improve outcomes. One of the challenges is that ALL is a rare disease. Community physicians should refer these patients to big institutions until they are familiar with the drugs.

The challenges that remain to be addressed are two-fold: it would be nice to have a drug with a long half-life that could be administered in a better way rather than over 4 weeks or 6 weeks. Finally, try to move CAR T cells earlier than later and have a safer product.
Printer Printing...