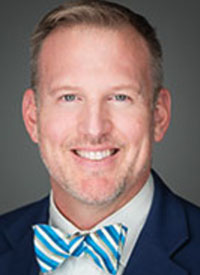 The data informing the optimal way to deliver chemotherapy, the timing of surgery, and the maintenance strategies that follow for patients with newly diagnosed advanced ovarian cancer are varied, explained Robert M. Wenham, MD. However, a nuanced understanding of the data is required to tailor these strategies appropriately.

"What has really changed is the manner in which chemotherapy is given, the timing of surgery, and now, maintenance therapy,” said Wenham. “Some maintenance therapies have come into the frontline setting—particularly with bevacizumab (Avastin) and PARP inhibitors—and have helped redefined subpopulations of patients who should receive additional treatment."

In an interview during the 2019 OncLive® State of the Science Summit™ on Ovarian Cancer, Wenham, gynecologic oncologist and chair of the Department of Gynecologic Oncology at Moffitt Cancer Center, discussed frontline management strategies for patients with newly diagnosed advanced ovarian cancer as well as the complexities of maintenance therapy.

OncLive: What is the ongoing debate between neoadjuvant chemotherapy and primary debulking surgery?

Wenham: Every single patient with ovarian cancer is probably going to receive platinum and taxane chemotherapy at this point. Patients who present with advanced disease are going to get surgery at some point during their treatment. For a long time, it was primary debulking surgery. Everyone came in for primary debulking surgery, or an attempt of it, and went on to receive chemotherapy. Now we have had 4 randomized trials—3 noninferiority trials and 1 superiority trial that wasn’t really superior—that have established that it’s very reasonable to proceed with neoadjuvant chemotherapy prior to interval debulking surgery in a certain group of patients.

However, there are some caveats to that. Patients who are probably the best candidates for neoadjuvant chemotherapy are [similar to] the ones who enrolled on the trials to begin with; almost one-quarter of those patients had stage IV disease. These patients had a lot of bulky disease or poor performance status. Data suggested that some patients with less disease and a better performance status might do better with primary debulking surgery. My advice is to allow an ovarian cancer expert to help guide you through that decision-making process from the get-go.

What is the hope for the TRUST trial?

The question is whether upfront debulking surgery is better than interval debulking surgery. The thought was that perhaps it takes a really sharp group of surgeons to do this. Determining how much of an impact surgery has remains debatable.

In the 1970s, survival was less than 2 years. Then, surgery played a bigger role in extending progression-free survival (PFS) and probably had more of an impact on overall survival (OS) than it does today. Now, well-managed patients who do really well with treatment are living between 5 and 10 years. Therefore, it's questionable how much of an impact surgery can still have in the frontline setting. If it's a positive study, it will certainly catch my attention, but I would be a little surprised.

That decision has become very complex for us. If we exclude the maintenance treatments and talk about the manner in which we give these drugs, no one is really debating platinum-based therapy and a taxane—that's pretty simple. However, we had 3 randomized trials—SWOG-8501/GOG-104, SWOG-9227/GOG-114, and GOG-172—that showed about a 20% to 25% improvement in OS with IP chemotherapy for patients with ovarian cancer. However, the uptake of this approach was not very good due to several reasons. For example, many women don't see healthcare professionals who administer IP chemotherapy; there were also toxicity concerns. However, if it’s delivered correctly, the toxicity is really not a barrier; it's just inconvenient. Nobody wanted to admit this; some people mitigated that by giving chemotherapy once daily.

There are even some data that BRCA-mutation carriers may benefit more from IP chemotherapy. First, you have to pick your patient—say you have a sick, frail, elderly woman with a very poor performance status. She’s probably not a candidate for IP chemotherapy. If you have a patient with suboptimal disease, there are some data to suggest that not only does this approach provide a PFS benefit, but perhaps a little bit of an OS benefit as well. That's a good group to maybe just give chemotherapy to. If you have a BRCA-mutation carrier, the question is whether you give them standard chemotherapy, or IP chemotherapy followed by a PARP inhibitor. The question remains unanswered. People who have come to a very easy conclusion may not understand all the nuances of these different studies.

Could you shed light on maintenance strategies? What have been some successes and failures?

Maintenance therapy is the one area that has been transformative over the last several years. We had the introduction of bevacizumab as a maintenance therapy. It started off in the recurrent setting and it got an approval [as frontline maintenance] in Europe early. Then, it worked its way forward in the United States as frontline maintenance therapy. It is the one platinum-sensitive combination with chemotherapy that may have shown an OS benefit in GOG-213. The other thing that's nice is you don't use up your chances with bevacizumab. We have data that are similar to data in colorectal cancer showing that you can use bevacizumab after bevacizumab for patients who have recurred.

We have the MITO16B-MaNGO OV2B-ENGOT OV17 trial, which showed you can preserve a PFS benefit in the next-line setting [with bevacizumab]. That benefit is probably preserved all the way through to platinum resistance. Maintenance is available; it's available for a large number of patients who have ovarian cancer.

The PARP inhibitor question is the one that everyone struggles with, especially [in the recurrent setting]. If patients have a BRCA mutation, they're going to be offered a PARP inhibitor at this point. However, if they have a platinum-sensitive recurrence, we still struggle a bit with whether to start with a platinum-based therapy and a taxane, a platinum-based therapy, gemcitabine and bevacizumab, or carboplatin/doxorubicin and bevacizumab followed by a PARP inhibitor. [We also struggle with the question of] whether we should keep bevacizumab going as well as the PARP inhibitor, which might make more sense even in a BRCA-negative patient compared with a BRCA-positive patient. These are questions that we struggle with.

I just learned from one of my colleagues that they use the rapidity of CA-125 drop; I thought that was an interesting factor to use as a surrogate for sensitivity. Perhaps those patients have homologous recombination deficiency (HRD). HRD is really confusing because people try to use HRD to differentiate those patients who might receive maintenance on a PARP inhibitor from those who wouldn't. I scratch my head a little bit because it looks like patients, even those without HRD, have pretty good hazard ratios compared with what we’re used to. The real questions involve determining where we start with maintenance and what we should continue with rather than if we should continue.
Printer Printing...