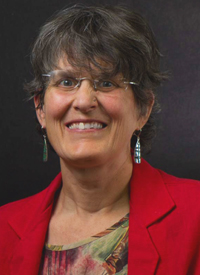 Jane McElroy, PhD
High cadmium levels have been associated with an increased risk in breast cancer, and new data has suggested that a similar risk exists in endometrial cancer.

In a 5-year observational study, 631 patients were enrolled with a history of endometrial cancer and 879 women were enrolled without a history of cancer. The participants were asked to complete a survey regarding risk factors associated with endometrial cancer. Urine and saliva samples were collected from the participants and analyzed for cadmium levels.

The cadmium levels in women with a history of ovarian cancer were significantly higher than the levels in the control group.

“We saw a 22% increased risk of endometrial cancer with a doubling of cadmium,” said lead researcher Jane McElroy, PhD.

In an interview with OncLive, McElroy, an associate professor in the Department of Family and Community Medicine at the University of Missouri School of Medicine, discussed the association between higher cadmium levels and an increased risk of endometrial cancer.

OncLive: Can you discuss the rationale behind conducting this study?

We believe that the mechanism for cadmium is estrogenic and because breast cancer and endometrial cancer are hormone-dependent diseases, that’s the link. Since it was estrogenic, we thought if exposed to high levels of cadmium, that a patient would have an increased risk of endometrial cancer.

What were the significant findings?

Did patients with high levels of cadmium see any difference in response from treatments?

Were there any other cancer types that this association could be synonymous with?

We know that increased amounts of cadmium can also be associated with lung cancer. That is another cancer type that is out there and known to correlate with cadmium, particularly for women and hormone-dependent diseases. However, breast cancer and endometrial cancer are the areas that we’re the most interested in investigating further.

Are there any next steps following this study?

Many people wonder about the source of cadmium, where it comes from, and if they are exposed to it. The answer is that everyone is exposed to cadmium, it’s ubiquitous. Every single participant in our study, those who had endometrial cancer and those who didn’t, all had cadmium levels at a measurable amount. However, it was the women that had higher cadmium levels that were at an increased risk for endometrial cancer. Where does that come from? The primary source for cadmium is diet. What happens is there are a lot of sources with it but the high majority of it is from nickel battery production and deposition.

When we intake cadmium in our bodies, it’s sequestered. There is a protein that grabs it and stores it in our kidney and liver. It stays in the body for 10 to 30 years, making the half-life quite long. We’re looking at continuous exposure to cadmium over time, primarily from our diet. That’s a primary source.

The public health message is twofold. The first is that it’s important to stop smoking as this is another health detriment associated with it. Hopefully, this could help someone think about quitting smoking, which would be great since smoking is going to increase your risk of breast and endometrial cancer.

The second public health message would be that hopefully one might be more moderate in their choices of food that we know tend to be high in cadmium. This would include the liver and kidney, since that is where it is stored in the body, even in the animals and crustaceans. The lobsters and the shellfish are also having high sources of cadmium, so it’s important to be more moderate in your consumption of those foods.

Is there anything else you would like doctors and patients to take away from this?

I would just want to restate that it is important to pay attention to your diet and to stop smoking. Be moderate of your intake of the liver, kidney, and the shellfish.
McElroy JA, Kruse RL, Guthrie J, et. al. Cadmium exposure and endometrial cancer risk: A large Midwestern U.S. population-based case-control study. PLoS One. 2017;12(7):e0179360. doi:10.1371/journal.pone.0179360.