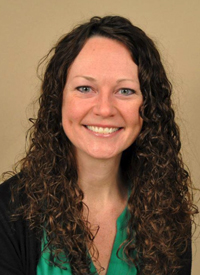 Immunotherapy is an exciting area of ongoing research in gastric and gastroesophageal junction (GEJ) cancer, said S. Lindsey Davis, MD, but investigators still need to identify in which setting and for which patient subsets this approach will be most beneficial.

“There have been several publications in the past year that have generated a lot of excitement in this disease—especially around immunotherapy,” said Davis, an assistant professor of medicine and gastrointestinal medical oncologist at the University of Colorado Cancer Center, adding that there have disappointing findings, as well.

In phase III KEYNOTE-062 trial, investigators evaluated the combination of pembrolizumab (Keytruda) with or without chemotherapy as frontline treatment for patients with advanced gastric or GEJ adenocarcinoma. Initial data showed that when compared with standard chemotherapy alone, the combination did not improve overall survival (OS), thus failing to meet one of the trial’s primary endpoints.1

However, in an arm of the study investigating the PD-1 therapy as a monotherapy versus chemotherapy, pembrolizumab met the primary endpoint of noninferior OS in the intent-to-treat population of patients with PD-L1–positive tumor (combined positive score [CPS] ≥1), HER2-negative tumors.

Updated results from the trial presented at the 2019 ASCO Annual Meeting2 showed in those patients with high levels of PD-L1 positivity (CPS ≥10), the agent showed a clinically meaningful improvement in OS. Specifically, 39% of patients in this subgroup were still alive at 2 years versus 22% of those in the chemotherapy arm.

“Therefore, it may be that we need to select the patients even more narrowly for that higher score, and higher degree of PD-L1 positivity in the tumor, if we use that as a biomarker,” said Davis.

In an interview during the 2019 OncLive® State of the Science Summit™ on Gastrointestinal Malignancies, Davis highlighted the latest immunotherapy developments and other advances in gastric/GEJ cancers.

OncLive: What are some of the key trials examining immunotherapy in gastric/GEJ cancer?

Davis: Immunotherapy has been a really exciting area in gastric and GEJ cancer, [with FDA-approved agents] in the third-line setting for patients who have PD-L1–positive disease. There are many clinical trials ongoing in this area.

The large clinical trial that we talked about specifically [at the State of the Science Summit™] was the KEYNOTE-062 trial in gastric and GEJ cancer, which was actually negative with no significant benefit in OS, PFS, or response [observed with the investigational treatment] compared with paclitaxel. However, there are multiple ongoing studies [exploring immunotherapy] in different lines of therapy and definitely looking at several different spaces. [It’s important to note that the KEYNOTE-062] trial showed that there was some benefit in the population who had a CPS score—the PD-L1 positivity of the tumor—of ≥1. During the clinical trial, they found that there was a better response in that group of patients. However, in an analysis done after the study was completed, when they looked at even higher scores—a CPS of 10—they found that this population seemed to have an even better outcome with that type of therapy.

What are some other settings in which immunotherapy is being explored?

Several [trials with immunotherapy are] ongoing in other settings, including the curative setting. We have an ongoing adjuvant study that is evaluating nivolumab (Opdivo) following chemoradiation in the curative intent setting for esophageal and GEJ cancer.

There are still a lot of opportunities and new combinations. Another phase II trial was done in the HER2-positive setting. This trial evaluated combining immunotherapy with standard chemotherapy and trastuzumab (Herceptin) in that disease and the benefit in terms of response was actually extremely high; the partial response rate was 87% and there was a disease control rate of 100% in a small population of patients. Although this was a phase II trial, it is exciting. We'll find out more from this with a phase III study down the road.

What is the role of ramucirumab (Cyramza) in this space?

Beyond immunotherapy, what is one of the biggest trials to have recently read out in the gastric/GEJ space?

The first study we discussed was the TAGS trial, which looked at TAS-102 (trifluridine/tipiracil; Lonsurf), an oral medication in late-line gastric cancer—so patients who have been heavily pretreated. All patients in the trial had to have received at least 2 prior lines of therapy. However, a good population of the patients had received 3, 4, or more prior regimens. This is definitely a population in need, where we don't have many good options available.

That study showed an improvement in OS in patients who received TAS-102 versus placebo and that was statistically and clinically significant. There was also a benefit in PFS as well as response. Furthermore, the adverse events were as we expected—mostly related to cytopenias. There were dose reductions required in about 50% of patients, but there were overall toxicities as expected. The investigators also interestingly looked specifically at the ECOG performance status decline, and the median was actually less for the group who received the treatment versus those who received placebo. Therefore, this is a good option for heavily pretreated patients with gastric cancer.

Are any interesting approaches being evaluated in the maintenance setting that you wanted to highlight?

One study of interest is evaluating a PARP inhibitor after patients have had a response to a platinum-based agent in the first-line setting. [The idea is to] use the inhibitor as a kind of maintenance regimen in those patients. This study is ongoing and accruing a large number of patients randomized to either the PARP inhibitor or placebo. That will give us a sense [of if this approach is effective]. Interestingly, they are not requiring patients to have any kind of homologous recombination deficiency or DNA repair deficiency [to enroll], but that is something that will be evaluated. That is one area of interest: maintenance therapy in those patients who respond well to platinum-based therapies.

What are some unanswered questions in gastric/GEJ cancer that you would like to see future research address?

Where is immunotherapy best served, and in what subset of those patients according to the PD-L1 status, etc.? Also, in the patients with esophageal cancer, squamous cell disease is an area in which we haven't had many specific trials to evaluate. We have a difficult time figuring out what to do for those patients.

Beyond that, [we need to better understand] the molecular subtypes of the cancer so that we can tailor our treatments better and identify those options. Lastly, we need to better navigate first-, second-, third-, fourth-line setting treatments and figure out where immunotherapy fits in.