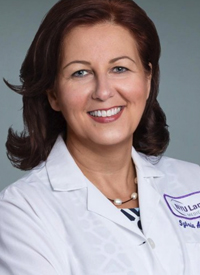 Sylvia Adams, MD
Standard chemotherapy is insufficient in the treatment of patients with triple-negative breast cancer (TNBC), but combining chemotherapy with immunotherapy may be key to unleashing the immunogenicity identified in TNBC, explained Sylvia Adams, MD.

For example, in the phase III IMpassion130 study, frontline treatment with atezolizumab (Tecentriq) and nab-paclitaxel (Abraxane) was found to decrease the risk of disease progression or death compared with nab-paclitaxel monotherapy in patients with metastatic or unresectable locally advanced TNBC.

The trial enrolled 902 patients who had not received prior systemic therapy. Patients were equally randomized to the 2 arms and received 100 mg/m2 of IV nab-paclitaxel on days 1, 8, and 15 of each 28-day cycle, with an aim of 6 cycles. Patients in the combination arm also received a fixed dose of 840 mg of IV atezolizumab on days 1 and 15 of each cycle versus placebo.

IMpassion130 follows a phase Ib trial, in which the frontline combination was explored in 32 patients with metastatic TNBC. The combination had a confirmed overall response rate of 66.7%.

Atezolizumab is also being studied in combination with paclitaxel (IMpassion131; NCT03125902) in patients with metastatic or locally advanced disease without prior therapy. (Halaven; NCT03051659).

In addition to developing combination strategies, defining biomarkers beyond PD-1/PD-L1 will help identify patients who are most likely to benefit from immunotherapy, said Adams.

In an interview during the 2018 OncLive® State of the Science Summit™ on Breast Cancer, Adams discussed the path forward for immunotherapy in TNBC.

OncLive: What role does immunotherapy have in TNBC?

Adams: Immunotherapy in breast cancer is a very exciting research area, especially for women who have TNBC. It has been shown that TNBC has visibility to the immune system. Often, there are tumors that have already been infiltrated with immune cells at diagnosis. This means that those tumors are immunogenic. Harnessing that [immunogenicity] and using therapies to augment that immune response can make a difference in patient outcomes.

[Harnessing immunogenicity] is sorely needed because women who have metastatic TNBC have a very poor prognosis with standard chemotherapy. Standard treatments lead to a median survival of 1 year, which is very short. We hope that using immunotherapies to stimulate the immune system is going to change patients’ outcomes.

Drugs that target inhibitor receptors on T cells are currently being tested. Inhibiting a negative signaling in those cells can [activate] an immune response toward the cancer. That has been shown in a subset of women with metastatic breast cancer. These medications have shown durable responses over months and years, which is very exciting. That doesn't happen in the majority of patients, so it is important to define the women who could benefit from treatment. It is also important to develop combinations to benefit a larger subgroup of patients.

We have been looking at combinations with chemotherapy because chemotherapy is the main standard of therapy for these women. These drugs can stimulate immune response and keep women stable until the immune medications work. These combinations are quite successful. In a [phase Ib] trial with 32 women, about half of the patients had a response to treatment in the first-line setting. Many women are alive at 1 and 2 years, which is not that common with standard chemotherapies.

We still have to further evaluate biomarkers. Hopefully, there will be trials with lots of tissue-based correlative studies, so we can figure out which patients respond and be able to predict that response in advance. For the other patients, we have to figure out other targets. These T cells don't just have PD-1/PD-L1 as targets. They can have many others, for instance TIM-3 or LAG-3. Those are important to target, as well. It becomes more of an individualized and targeted approach for specific patients.

Does prior systemic therapy deplete a patient's potential response to immunotherapy?

The number of prior lines of therapy a patient has been exposed to is important. Women who had prior therapies in the metastatic setting have much lower response rates. In the palliative setting, response rates can be as low as 5% or 10% in women who have had prior chemotherapy.

If you treat women in the first-line setting at diagnosis of metastatic recurrence, response rates can be 25%. It is important to enroll women in clinical trials as early as possible because it does make a difference in terms of response.

What are the predictive markers in breast cancer?

Tumor-infiltrating lymphocytes are a predictive marker. We also look at the expression pattern in [the immune cells of the tumor] and their PD-L1 [expression].

Are most immunotherapy trials in TNBC basket trials or are there stratified trials?

Currently, most trials are targeting the known subtypes of breast cancer. They should ideally focus on the subsets of TNBC that have an immune infiltrate at diagnosis or at the start of treatment. Those patients are more likely to respond [to immunotherapy].

What is an area you would like to see addressed?

We need more agents and many more approaches to target and harness the immune system. We need combination therapies and biomarkers. [Biomarkers] are very important in lung cancer. They are helping to guide which patients to treat with checkpoint inhibitors. In breast cancer, we don't yet have an [immunotherapy] approval or biomarkers to [use].

What are you hoping community oncologists apply to practice?

Certain subsets of breast cancer are immunogenic. Patients with metastatic TNBC treated with checkpoint inhibitors can [derive] incredible and durable responses. It’s very important that patients are offered trial participation, so that those drugs can be approved for patients who would benefit. Trials should include tissue biopsies for the development of predictive biomarkers. We also need to look at more combination therapies.
Genentech (Roche). Phase III IMpassion130 study showed Roche’s Tecentriq plus Abraxane significantly reduced the risk of disease worsening or death in people with metastatic triple negative breast cancer. www.roche.com/media/releases/med-cor-2018-07-02.htm. Published July 2, 2018. Accessed July 17, 2018.
Printer Printing...