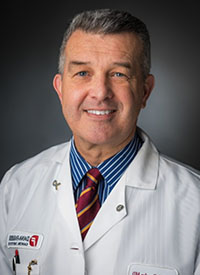 The combination of INO-5401 and INO-9012 with cemiplimab (Libtayo), plus chemoradiation, demonstrated promising 6-month progression-free survival (PFS) rates in patients with newly diagnosed glioblastoma multiforme (GBM) that is O6-methylguanine-DNA methyltransferase (MGMT) methylated or unmethylated, according to interim findings of a phase II trial (NCT03491683).1

Results of the 52-patient study showed that 80% (n = 16/20) of MGMT gene promoter—methylated patients and 75% (n = 24/32) of MGMT-unmethylated patients were progression-free at 6 months, measured from the time of their first dose. These data exceed historical standard-of-care results, Inovio Pharmaceuticals, the developer of INO-5401 and INO-9012, stated in a press release.2

Detailed results of the study will be presented as part of a late-breaking abstract during the 2019 Society for Immunotherapy of Cancer (SITC) Annual Meeting.

“This innovative trial provides promising information that the combination of INO-5401 plus INO-9012, a T-cell promoting therapy, combined with Libtayo, a checkpoint inhibitor, may provide clinically meaningful benefit in this very difficult-to-treat disease,” David Reardon, MD, coordinating principal investigator of the study and the clinical director for Neuro-Oncology of Dana-Farber Cancer Institute, stated in a press release.

INO-5401 is a T-cell–activating immunotherapy encoding for 3 tumor-associated antigens—hTERT, WT1, and PSMA—while INO-9012 is an immune activator encoding interleukin-12.

In the multicenter, open-label, phase I/II trial, investigators evaluated the safety, immunogenicity and preliminary efficacy of INO-5401 and INO-9012 in combination with cemiplimab plus chemoradiation in 52 patients with newly diagnosed GBM.

In the trial, INO-5401 is administered at 9 mg along with 1 mg of INO-9012 every 3 weeks for 4 doses, and is then given every 9 weeks, plus cemiplimab at 350 mg intravenously every 3 weeks. Radiation is administered as 40 Gy over 3 weeks, and temozolomide is given concurrently in both cohorts, and is followed by maintenance temozolomide in cohort B.

To be eligible for enrollment, patients with newly diagnosed GBM must have a Karnofsky performance status of ≥70 at baseline; had recovered from prior effects of GBM surgery; no clinically significant findings on an electrocardiogram; adequate organ function; and receive dexamethasone equivalent dose ≤2 mg daily, that was stable or decreased for ≥3 days prior to day 0.

Those who had >1 cm2 of residual tumor enhancement on postoperative magnetic resonance imaging (MRI); multifocal disease or leptomeningeal disease on postoperative MRI; had dexamethasone equivalent to >2 mg daily; had received prior treatment with a PD-1/PD-L1 pathway-blocking agent or idelalisib (Zydelig), received an immunomodulatory agent within 28 days of the first day of treatment, and had ongoing or recent evidence of autoimmune disease were excluded from the trial.

The primary endpoint is percentage of patients with adverse events (AEs); secondary endpoints include 18-month overall survival and changes in blood-based biomarkers of tumor response.

The findings to be presented at the 2019 SITC Meeting, which include supportive safety, tolerability, and immunogenicity data, showed that the combination demonstrated an acceptable safety profile that was consistent with that of cemiplimab as well as INO-5401 and INO-9012.

According to the abstract, the most common grade ≥3 AEs were elevations in alanine aminotransferase (ALT) or aspartate aminotransferase (AST; n = 5), and tumor inflammation/edema (n = 5); there was one grade 5 unrelated AE of urosepsis. There was 1 treatment-related serious AE that was reported in ≥1 patient, which was pyrexia. Immune-related AEs were reported in 22 patients (42%), with the most common being elevations in ALT/AST (n = 8), and were most commonly reported in the first 9 weeks of treatment.

"Our new data demonstrates the potential of our immunotherapies utilizing tumor-associated antigens in cancer treatments. Our goal in this GBM trial is to increase progression-free and overall survival of patients facing a disease where neither the standard of care nor clinical outcomes have significantly advanced in decades,” J. Joseph Kim, MD, president and CEO of Inovio Pharmaceuticals, stated in the press release.

“Previously, other checkpoint inhibitor treatment alone in GBM trials did not show any meaningful clinical benefit over standard of care,” Kim added. “However, the addition of INO-5401 and its ability to generate antigen-specific T cells demonstrated early efficacy signals in progression-free survival. We look forward to reporting additional data including overall survival at months 12 and 18 from the trial in the coming year.”

Final data from the phase II trial are expected in the fourth quarter of 2020.