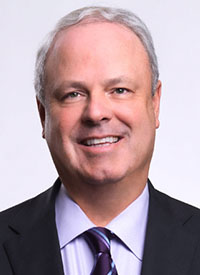 Immunotherapy, PARP inhibitors, and antibody-drug conjugates (ADCs) have shown clinical benefit in patients with metastatic triple-negative breast cancer (TNBC). The use of these treatments is guided in part by the predictive value of PD-L1 expression and BRCA mutations, explained Howard A. "Skip" Burris, III, MD, FACP, FASCO.

“The biggest take-home message in TNBC is the importance of molecular profiling and biological assessment. These patients must be assessed for BRCA mutations or other mutations in the DNA damage repair pathway,” said Burris, chief medical officer and president of clinical operations at Sarah Cannon Research Institute. “We need to know whether these patients have PI3K and AKT alterations, and we need to know whether they overexpress PD-L1. It’s an important tact to take as you're [determining] what therapy to give to these patients.”

In an interview during the 2020 OncLive® State of the Science Summit™ on Breast Cancer, Burris, who is also the 2019-2020 ASCO president and a 2014 Giant of Cancer Care® in Drug Development, discussed the progress the field of oncology has made in metastatic TNBC and the work being done to broaden the utility of novel approaches.

OncLive: What recent treatment advances has the oncology community made in metastatic TNBC?

Burris: The field of TNBC continues to evolve. TNBC remains largely a disease in which we’re looking to incorporate novel strategies with cytotoxic agents, particularly platinum-based therapies. We now know that a subset of patients who overexpress PD-L1 benefit from the addition of atezolizumab (Tecentriq) to chemotherapy; that’s certainly encouraging. We also know that a substantial number of patients with TNBC carry the BRCA1/2 mutation, and in that situation, PARP inhibitors have proved to be successful. PARP inhibitors are being studied in a variety of settings, including in the maintenance setting, both as single agents and in combination. We’re seeing some new data [with these agents] in combination with immunotherapy, which is very attractive.

We’re also seeing ADCs, which are a different version of cytotoxic therapy. We've had some wins and losses with [these agents]. Recently, we saw some very encouraging data with sacituzumab govitecan, a novel ADC that uses a camptothecin payload that is attached to the antibody. The result is a novel chemotherapeutic that has been shown to be very successful—more than one-third of patients are responsive to this drug. [Ladiratuzumab vedotin (SGN-LIV1A)] is another ADC under investigation; it targets LIV-1. We have seen data with this agent in patients with breast cancer. [Overall], patients with TNBC have done particularly well with these ADCs.

What has your experience been with immunotherapy in practice?

My experience with the use of atezolizumab and chemotherapy has been positive. It's important to test patients for PD-L1 overexpression. I’ve found that about one-third of my patients overexpress PD-L1. The results of the IMpassion130 trial showed that 40.9% [of patients overexpressed PD-L1], so it’s not the majority of patients. Certainly, we don't want to waste the patient's time by using a therapy that might not benefit them. However, in the context of PD-L1 positivity, a well-tolerated antibody and the chemotherapy backbone with which it's combined tends to work well for the patient in terms of [safety] and quality of life.

What investigational approaches are we seeing with immunotherapy?

Should a patient have both high PD-L1 expression and BRCA1/2-mutant disease to be eligible for a combination comprised of immunotherapy and PARP inhibition?

The question...requires further study. It's clear that a PARP inhibitor in combination with an immunotherapy agent [provides] an additive effect. Certainly, patients who overexpress PD-L1 and have a BRCA1/2 mutation achieve the greatest benefit. The real benefit for the PARP inhibitors is in [those with] the BRCA1/2 mutation, but a broader group of patients benefit from the PD-L1 inhibitors.

Has maintenance immunotherapy been studied? Do you see this as a promising approach?

Maintenance immunotherapy approaches in TNBC require further study. There is a lot of debate about whether to continue treatment for 1 year, for 2 years, or until progression. In many of the trials, patients had their best response stop at 1 year, and I believe that's probably a prudent approach. Anecdotally, we're beginning to see that the patients who relapse after that, particularly those who relapse 1 year or more [after discontinuing therapy], are still sensitive [to the treatment] and have been able to reinstitute those therapies and other regimens. Well-designed maintenance trials would be important in understanding how to use these drugs cost-effectively.

How can we broaden the utility of PARP inhibitors beyond combinations with immunotherapy?

PARP inhibitors are interesting. Many experts in the field, and chemists in particular, would talk about these drugs as being cytotoxics and not too dissimilar from chemotherapy. [PARP inhibitors] are oral agents that are certainly better tolerated [than chemotherapy] in many settings. However, there are many reasons to consider other combinations that might be beneficial. We know subsets of patients exist beyond [those with] BRCA1/2-mutant [disease], such as those who have mutational profiles that are consistent with DNA damage repair or homologous recombination repair profiles. [The presence of] other mutations, such as ATM and ATR, would indicate sensitivity [to PARP inhibitors]. We're beginning some trials looking at broader groups of patients who might have the biologic or mutational profile to indicate benefit with PARP inhibitors.

Could you discuss some of the ongoing work being done with ADCs?

The ADCs are going to allow us to administer chemotherapy for a longer period and in a better-tolerated fashion. Patients won’t have to stop treatment because of adverse events. My perspective on ADCs has changed [over the years]. I've certainly advocated for better-tolerated payloads and less therapy. If we can develop an antibody that binds well to the receptor on a cancer cell, we shouldn't need that much cytotoxic [impact—especially] if we have great delivery. With some of the newer payloads and some of the newer ADCs, we’re seeing that many biopharmaceutical technology companies are taking this approach.

Regarding sacituzumab govitecan, the camptothecin background is certainly attractive. We have not used the camptothecins in a large way in breast cancer until recently. We’ve certainly seen the encouraging data with the fam-trastuzumab deruxtecan-nxki (Enhertu; DS-8201) ADC in HER2-positive disease. Regarding [ladiratuzumab vedotin], it has a tubulin inhibitor backbone. [We may want to] look at giving that agent earlier when patients don’t have cumulative toxicity from prior taxane therapy. By doing that, we may see a safety profile advantage.
Printer Printing...