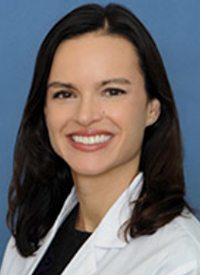 Although one school of thought in the multiple myeloma paradigm is not to put the most potent regimens upfront, Sarah M. Larson, MD, disagrees with this sequencing approach.

“A patient’s first response is going to be their best response. Their second response will be their second-best response,” said Larson. “We need to get patients into a good response upfront. If we try to save drugs for later, they may not work at that time.”

To that end, interim results from the phase II GRIFFIN trial, in addition to showing the feasibility of quadruplet therapy with daratumumab (Darzalex), bortezomib (Velcade), lenalidomide (Revlimid), and dexamethasone (D-VRd), demonstrated a stringent complete response rate of 42.4% with D-VRd versus 32.0% with VRd alone in newly diagnosed patients with transplant-eligible myeloma (odds ratio [OR], 1.57; 95% CI, 0.87-2.82; 1-sided P = .068).1

Also pending are data from the phase III COBRA trial (NCT03729804), in which investigators are evaluating the use of carfilzomib (Kyprolis) plus lenalidomide/dexamethasone versus VRd in patients with newly diagnosed disease, irrespective of transplant eligibility.

Following the results from the phase III MAIA trial, newly diagnosed patients with transplant-ineligible myeloma are also benefiting from novel approaches. This trial was the basis for the June 2019 approval of the combination of daratumumab, lenalidomide, and dexamethasone (DRd), which showed a 44% reduction in the risk of disease progression or death versus lenalidomide/dexamethasone alone (HR, 0.56; 95 CI, 0.43-0.73; P <.0001).2

Larson also noted that a number of agents are emerging in the relapsed/refractory setting and novel regimens have been approved. The triplet of pomalidomide (Pomalyst), elotuzumab (Empliciti), and dexamethasone became available in November 2018.

Finally, regarding CAR T-cell therapy, improvements to existing vectors are expected to increase T-cell persistence and supply yet another modality from which to choose for patients.

In an interview during the 2019 OncLive® State of the Science Summit™ on Hematologic Malignancies, Larson, an assistant professor at the University of California, Los Angeles (UCLA), discussed trials with the potential to shift treatment strategies in the frontline and relapsed/refractory settings of multiple myeloma and remaining research questions in the field.

OncLive: Does minimal residual disease (MRD) have any impact on treatment decisions?

Larson: We're getting to a place where we can get patients to a MRD-negative state. However, how we get there and how we use MRD testing are two of the biggest questions in the frontline setting following stem cell transplant. Following transplant, there’s also the discussion of maintenance and whether we should administer lenalidomide, ixazomib (Ninlaro), or a combination. Moreover, should we use MRD testing along with maintenance, similar to how we do after stem cell transplant?

In the frontline setting, there are two key trials that we are waiting to get the final results of. We have the initial results from the GRIFFIN trial, which is comparing VRd with VRd plus daratumumab. The results look promising in the daratumumab arm, but we need further data to decide if that's going to be practice changing. The other trial is [called COBRA] and is comparing KRd with VRd. The results of these trials could change our frontline management of patients with multiple myeloma.

How are you currently determining transplant eligibility?

The first cutoff is age, but since transplant is well tolerated for patients with myeloma, that age tends to be high. We usually use 80 as our cutoff for transplant at UCLA. Other factors have to do with a patient’s cardiovascular and pulmonary status. End-stage renal disease as a result of myeloma is not a contraindication. In that case, we modify the mobilization regimen and dose.

What frontline regimens have shown the most promise?

In the GRIFFEN trial, patients in the daratumumab arm go onto receive maintenance daratumumab and lenalidomide; those data may be practice changing. We just don't have enough data yet to [say that it is]. In COBRA, investigators are comparing KRd with VRd. Pending the results, are we going to decide that KRd is the optimal backbone on which to add daratumumab? We'll need an additional trial to make that comparison. As long as the tolerability is there, we may move to a quadruplet regimen upfront rather than a triplet regimen.

How will those changes affect sequencing?

This is where you need to decide which school of thought you have. I tend to believe that we shouldn't save drugs for later. We can always revisit drugs. Just because we used daratumumab upfront, it doesn't mean we couldn't use it later on in a different combination. We shouldn't worry about not having drugs later. That's why we continue to do research, so we have more options in the relapsed/refractory setting. That's where we need to go rather than insufficiently treating patients upfront in order to sequence regimens later on.

How are you assessing for MRD negativity? Is MRD testing becoming widespread?

We still have a lot of work to do when it comes to MRD. Right now, MRD testing is only done in clinical trials. ClonoSEQ is an FDA-approved assay [that is used to measure the amount of MRD]. While it is available, we don't know how to change our clinical practice based upon the results.

We need more trials to determine whether we need to increase the treatment intensity of
an MRD-positive patient. Conversely, if a patient is MRD negative, can we pull back on treatment? Could a patient discontinue their lenalidomide maintenance? We don't know. There are a lot of questions surrounding MRD testing. [MRD] is an excellent endpoint for trials, but we don't know how to use it in practice. It's not considered a standard in clinical practices.

Could you discuss some recent developments in the relapsed/refractory setting?

There is so much going on in relapsed/refractory multiple myeloma; it’s a very exciting time for the field. There have been new approvals and new agents, starting with carfilzomib, which was approved as a once-weekly regimen. It makes the drug easier to use versus the twice-weekly dosing. That being said, it's a combination, not a triplet. The triplet studies still need to be done to assess safety. However, more people will continue to adopt carfilzomib weekly dosing.

Additional approvals include pomalidomide, elotuzumab, and dexamethasone from the phase II ELOQUENT-3 trial. It was a little surprising to see that the regimen still works in later lines of therapy. A lot of us believed elotuzumab should be used in patients who have not been heavily pretreated and have a slow relapse. Data from the ELOQUENT-3 trial didn't tell us that. Even after 4 lines of therapy, patients still responded to the triplet regimen.

In the more heavily pretreated space, selinexor was just approved. It was approved based on an overall response rate of 21% and a 5-month median duration of response (DOR). We're looking for bigger blockbusters in that space; that’s where our novel agents come in. We're looking at things like CAR T cells, bi-specifics, and antibody-drug conjugates. There is a lot of excitement around engineered cell therapies across hematologic malignancies; myeloma is no exception. bb2121 is the anti-BCMA CAR T-cell therapy that's farthest along in development. Right now, we're waiting for an FDA approval for that therapy in myeloma.

Are there any safety data to be aware of with selinexor?

With selinexor, we may need to adjust the dose. Right now, the label indicates its use in combination with dexamethasone. Unless you have significant experience with the drug, I would be cautious of putting together off-label combinations, even though it’s something we tend to do very readily in myeloma. However, because of the fatigue, gastrointestinal adverse events, and myelosuppression, I would be a bit cautious of making off-label combinations. Trials are in progress looking at selinexor plus other agents. I would consider putting patients on [one of those] clinical trials.

Could you discuss the design of the BOSTON trial?

Investigators are evaluating bortezomib, selinexor, and dexamethasone. It was thought that the FDA would want the full results from the BOSTON trial before they approved the combination. Of course, we did get the approval prior to the full results of that trial. The STOMP trial is investigating additional combinations. Bortezomib is a great drug in myeloma, but as we get to later lines of therapy, we tend to look for more potent combinations. If you're looking to use a proteasome inhibitor, [I would consider] carfilzomib, selinexor, and dexamethasone.

The company has modified the vector to increase its persistence. [The company is] modifying the cells, the ratio, and the types of T cells that are modified. The hope is that it will increase the persistence [of the CAR T cell]. Right now, the response rate is beautiful at 85%.

Selinexor is a great drug; it gives us another tool in our toolbox, but it has a 21% objective response rate.  That's why we’re excited about bb2121. The issue is that the median DOR is 11.8 months; we want a longer DOR for these patients. 1 year off of therapy is still pretty good in myeloma, especially in a heavily pretreated patient population, but if we can extend it, that would be ideal. One of the ways we can do that is by modifying different T-cell subsets. That's what we're looking to do with the construct changes to bb21217.