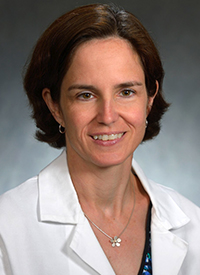 DCR at 12 weeks was the primary endpoint of the single-arm study, with a target rate of 75% indicating success. The objective response rate (ORR), which consisted entirely of partial responses, was 52% with the olaparib/durvalumab combination (95% CI, 31%-72%). Data for progression-free survival (PFS), overall survival, and duration of response were not yet mature at the time of the analysis.

"The DCR rate suggests that this may be an active and important combination in this group of patients," said lead investigator Susan M. Domchek, MD, Basser Professor in Oncology, Perelman School of Medicine, University of Pennsylvania. "What we don't know is how much the immune agent enhances the benefit of the olaparib, because we do know that olaparib can be an effective drug in this patient population."

The phase III OlympiAD study assessed single-agent olaparib compared with standard therapy for patients with BRCA1/2-mutant, pretreated metastatic breast cancer. In findings published in the New England Journal of Medicine,2 single-agent olaparib demonstrated a median PFS of 7.0 months versus 4.2 months with standard therapy (HR, 0.58; 95% CI, 0.43-0.80; P <.001). The ORR with olaparib was 59.9% compared with 28.8% in the standard-therapy group.

"We're very hopeful that olaparib will be approved by the FDA for BRCA1/2-related breast cancer, and we hope to hear about that early in the next year," Domchek said.

The MEDIOLA trial enrolled 25 patients with BRCA-mutant metastatic breast cancer. Twelve patients had HR-positive tumors and 13 had triple-negative disease. Patients were positive for BRCA1 (n = 11) and BRCA2 (n = 14). At study entry, patients received olaparib monotherapy at 300 mg twice daily during a 4-week run-in period, which was followed by the combination of olaparib at the same dose and durvalumab at 1.5 g every 4 weeks.

Although medians had not yet been reached, Kaplan-Meier curves showed that approximately 70% of patients remained progression free. Additionally, most patients remained alive at the time of the analysis, with 1 event reported.

The 90% confidence interval for the DCR benefit was 62% to 92%. Of those without tumor shrinkage at week 12, 3 did not experience disease control, 1 was not evaluable, and 1 permanently discontinued due to progressive disease. Responses were seen regardless of hormone receptor status, BRCA mutation type, or receipt of prior platinum-based chemotherapy. The longest response was ongoing at 308+ days. The median duration of response was not yet reached at the time of the analysis.

"What we don't understand are the predictors of response for these combinations," said Domchek. "We don't know if a prolonged response is a benefit of combining the two agents, meaning the response we get from olaparib is extended by adding the immune agent."

Adverse events (AEs) of grade ≥3 in severity were infrequent with the combination therapy. The most common grade ≥3 AEs were anemia (8%) and neutropenia (8%). Twenty patients required an olaparib dose reduction due to AEs and durvalumab dose delays were needed for 16% of patients due to AEs.

"The good news is that the toxicity profile was not changed based on what we know about each of these agents individually," said Domchek. "We didn't see any enhanced toxicity of the olaparib and we saw the expected toxicity of the immune agent."

The phase II DORA trial is planned to further assess the combination of olaparib and durvalumab for patients with platinum-treated triple-negative breast cancer. This trial plans to enroll 60 participants with a primary endpoint of PFS. The estimated primary completion date for the trial is October 2019 (NCT03167619).