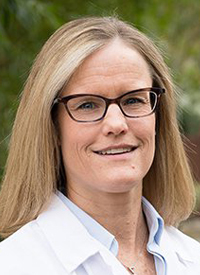 Karen Reckamp, MD
In just 1 year, the treatment paradigm of non–small cell lung cancer (NSCLC) shifted dramatically in varying patient populations, especially in those with molecular abnormalities—such as EGFR mutations, ALK translocations, and BRAF mutations—high levels of PD-L1 expression, and even in those without any expression of PD-L1.

“All of these changes are important today and [we need to] have discussions about the impact in the clinic, which makes a session like this so important,” said Karen Reckamp, MD, during the 2017 OncLive® State of the Science SummitTM on Advanced Non–Small Cell Lung Cancer.

Reckamp, associate professor and medical director for clinical trial operations, City of Hope, highlighted some of the key advancements in the lung cancer landscape in an interview during the meeting, focusing specifically on positive phase III data, recent regulatory approvals, and what research the new year is likely to bring.

OncLive: Could you reflect on recent advancements in lung cancer?

Reckamp: The landscape of lung cancer treatment has changed dramatically. Even in the past year, we have a multitude of drugs that have been approved and new genes that have been identified that are potential targets for new drugs and immunotherapy.

We have experts discussing how to use these new therapies, how they impact our patients’ treatment, and we have also brought aspects of healthcare disparities into the discussion, which is really important. We find that people of minority and lower socioeconomic groups have less access to care or are less likely to get the standard of care and then have poor outcomes. All of this is incredibly important to help improve patient care that we do day in and day out to help improve outcomes for all patients who have lung cancer.

What is the importance of molecular testing?

The importance of molecular testing is that we have a number of genes that have specific targeted drugs available today. We have several genes that have drugs that are in ongoing clinical trials. Still, in many practices, people get just a handful of genes tested and, in lung cancer, that is no longer acceptable. And, we end up having not enough tissue to test, so moving toward next-generation sequencing is important. Moving toward blood-based next-generation sequencing is where we are going so that we have more access for more people, but we also need to make it affordable for everybody because it changes care in a major way.

What is the current progress with liquid biopsies?

For lung cancer, the progress with liquid biopsies has been very rapid and impactful. We have blood tests that are approved by the FDA for testing EGFR. Again, we have multiple genes for which we have specific targeted agents. We have clinical trials that allow for liquid biopsies as the primary testing and will allow patients to go on trial based on liquid biopsies, which is groundbreaking and will help us to move away from tissue being the gold standard to being a positive test with an oncogenic driver as the gold standard.

Moving onto these specific agents, can you discuss osimertinib (Tagrisso) and the potential role that could have as a frontline agent in EGFR-mutant NSCLC?

Osimertinib is a very good drug in EGFR-mutant NSCLC. It works very well in the brain and in T790M-mutated lung cancers; now, we have the data showing improvement in progression-free survival (PFS) for patients in the first-line setting over our standard first-generation EGFR tyrosine kinase inhibitors. There is still a question about resistance and what treatments are available following osimertinib.

Given the beneficial PFS, the low toxicity rate, and the high responses in the brain, it’s a pretty easy drug to use in the first-line setting. However, there are many questions that are unanswered about how long patients will live. Will patients live longer and better? At the end of the day, these patients expect to have multiple options and to have good quality of life for a long period of time—and we have to help them get there.

Durvalumab (Imfinzi) was another interesting agent seen in the PACIFIC trial this year. Can you comment?

Durvalumab is not yet approved for lung cancer; we anticipate an approval based on the PACIFIC trial and the improvement in PFS, which was dramatic for patients who have locally advanced NSCLC following chemotherapy and radiation. The data are impressive, and it will be easy to use once we have approval. We anticipate that approval given the very highly positive results.

What combination regimens are being looked at currently that seem promising?

Today, there are multiple combinations that are being evaluated. Lung cancer is different than melanoma; we haven’t seen the same benefit with the CTLA-4/PD-1 or PD-L1 combinations. The toxicity in patients with lung cancer may be less tolerable because of comorbidities that these patients have, so this is still playing out.

Outside of CTLA-4, most of the other combinations are all in the running. We have to do better because response rates are still 20% or less when we use single-agent [immunotherapy] in the first-line setting. When [a patient is] highly selective, it may be closer to 50%; however, that is still a large number of patients who don’t respond. We need to do better. I don’t think there is a clear winner in terms of combinations today.

What are the biggest remaining challenges in the field of lung cancer?

The biggest challenges are resistance—resistance to immunotherapy and resistance that develops to targeted therapy. We need to overcome that because we have great therapies and more patients respond and live longer, but our patients don’t live forever so we are not curing this disease and we have a long way to go.

The second biggest challenge is cost and, as we have come forward with more new therapies, the cost may be prohibitive and we need to find a way, again, to get more people the right therapies to help them live longer and better. However, there is a huge cost associated with that—with testing and with treatments.

How would you describe 2017 as a pivotal year for lung cancer treatment?

The biggest advancements in 2017 would be looking at more effective first-line agents as we saw with alectinib (Alecensa) for ALK-positive disease and osimertinib for EGFR-mutant disease, and starting to learn how to better sequence them but also provide more efficacy with less toxicity for patients. For patients with BRAF mutations, we now have an FDA-approved combination.