Dr. Pemmaraju on Methods to Treat Anemia in MPNs

Dr. Daver on Azacitidine and Nivolumab in Acute Myeloid Leukemia 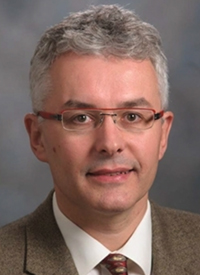 Limited research on interferon has prevented its widespread use in patients with myeloproliferative neoplasms (MPNs); however, newer generations of the treatment are demonstrating noninferiority to its favored counterpart, hydroxyurea, and are showing greater tolerability and efficacy compared with older generations of the agent, explained Srdan Verstovsek, MD, PhD.

, Verstovsek, director of the Hanns A. Pielenz Clinical Research Center for Myeloproliferative Neoplasia at The University of Texas MD Anderson Cancer Center, discussed the use of interferon in these rare blood diseases.

OncLive: Could you provide a history of the use of interferon in MPNs?

Verstovsek: Interferon is a biological product. We all have it in our body; it shows up when we have inflammation or infection. As such, it has been used in cancer therapy. It was discovered to be useful in patients with chronic diseases of the bone marrow. Interferon was standard of care in chronic myeloid leukemia (CML) until about 2001 because it would improve the bone marrow environment and decrease the number—sometimes even eliminate the number—of malignant cells in the bone marrow. Essentially, it would normalize the blood cell counts, thereby making some patients live longer. In CML, that was replaced by specific inhibitors in the early 2000s.

That is certainly reflected in the higher efficacy and long-term efficacy [rates]. Durability is another issue. If you have an active agent that [remains active for a very long period of time], there are some toxicities that develop later in the course of the therapy, including autoimmune conditions or depression.

Could you discuss ropeginterferon and its potential in this space?

Ropeginterferon was recently approved in Europe; the announcement was made in December 2018 for the treatment of patients with PV. We hope that we will have that particular medication here in the United States, in clinical studies, in the very near future.
... to read the full story
To Read the Full Story
REGISTER
LOG IN