Dr. Otterson on the Utility of Immunotherapy in NSCLC
OncologyLive > Vol. 19/No. 18 >

Persistence Paved the Path of Discovery for an Immunotherapy Pioneer 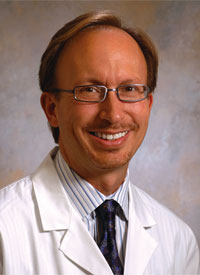 For many years, no one took immunotherapy seriously, but Thomas F. Gajewski, MD, PhD, persisted in his study of how the immune system interacts with cancer. Despite the naysayers, he searched for ways to harness the body’s immune system to fight off cancer cells. His endless pursuit and study in the field of immuno-oncology paid off, and Gajewski is now hailed as a pioneer in the field of cancer immunotherapy, waving its banner even when no one else would.

His drive to succeed is recognized by his colleagues and friends. “[Gajewski is] one of the smartest guys I know, hands down. He has very high standards, and he has really done some spectacular work in immunotherapy,” Hwu says. “I appreciate that he makes us all better. He pushes us scientifically, and he pushes us musically.”

Perhaps Gajewski is best known in the field of oncology for a discovery in his lab at the University of Chicago in 2015, when he showed that gut microbiota in mice have a role in responses to immunotherapy treatments. When Bifidobacterium was orally administered into the digestive tract of mice with melanoma tumors, it led to increased tumor control to the same extent seen with anti– PD-L1 therapies. The mechanism of action was due to enhanced dendritic cell function and CD8-positive T-cell priming and accumulation in the tumor microenvironment. The combination nearly abolished tumor outgrowth.

Now Gajewski believes that discovering the connection between the microbiome and clinical outcomes will enable the development of microbiota-modulating interventions to improve outcomes in patients undergoing cancer treatments. “This finding provides a novel way to exploit that connection—to improve immunotherapy by selectively modulating intestinal bacteria,” he says.

A longtime resident of Chicago, Illinois, Gajewski stayed in the city to study, from his undergraduate years all the way through his residency and fellowship. In 1989, he received his PhD and in 1991 his MD at the University of Chicago Pritzker School of Medicine, where he joined the faculty in 1997. He is currently a professor of medicine and pathology and runs a laboratory investigating antitumor immunity. Many brilliant minds, as well as research, have come out of Gajewski’s laboratory. Hwu notes that Gajewski is a wonderful mentor and continues to train students and fellows at University of Chicago Medicine.

Gajewski is also well known for his study of RAS pathway signaling, which is involved in T-cell activation. He and his team identified diacylglycerol kinase-alpha (DGK-alpha) as a key negative regulator of RAS activation and T-cell function in the anergic state. Regulation of RAS activation, he thinks, could be a potential target for immunopotentiation.