The Ivy Brain Tumor Center at Barrow Neurological Institute in Phoenix, Arizona, is attempting to subvert this pattern of clinical failure for promising therapeutics by changing the way preclinical studies are developed and conducted to assess the efficacy of drugs for GBM. 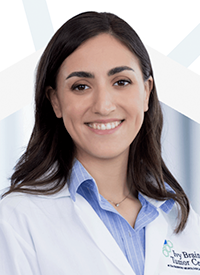 Glioblastoma Multiforme (GBM) is the most aggressive form of primary brain cancer affecting adults. It is a devastating disease with an extremely poor prognosis, with a median survival of 14 to 16 months after treatment.1

The current standard of care, surgical resection followed by concurrent administration of radiation and temozolomide (Temodar), has remained unchanged for almost 2 decades.2,3 The FDA has not approved a drug for GBM since temozolomide, and no novel agents have been shown to prolong patient survival.

One of the reasons underlying the clinical failure of promising therapeutics in GBM is inadequate testing of novel treatments at the preclinical level. The Ivy Brain Tumor Center at Barrow Neurological Institute in Phoenix, Arizona, is attempting to subvert this pattern by changing the way preclinical studies are developed and conducted to assess the efficacy of drugs for GBM.

One of the biggest challenges in the field of brain cancer treatment is that most drugs cannot cross the blood-brain barrier (BBB), which prevents the passage of potentially harmful substances, including drugs, into brain tissue.4,5 Because these drugs cannot enter the brain, they fail to accumulate within GBM tissue at therapeutically relevant concentrations, resulting in clinical failure.6

Although assessment of drug pharmacokinetics (PK) in GBM clinical trials is becoming more common, PK properties of most drugs are not routinely assessed in preclinical models of GBM. However, all new drugs tested at the Ivy Brain Tumor Center are extensively screened for 2 essential parameters: does the drug accumulate in sufficient concentrations within the tumor tissue, and, if so, is the drug exerting its intended pharmacodynamic (PD) effects on the tumor cells? We use this extensive PK-PD paired analysis approach to conclusively determine the translational potential of any drug in preclinical models of GBM. Our goal is to accelerate the translation of encouraging preclinical findings into new therapies for patients.

In a preprint available on the server BioRxiv, we report a comprehensive PK-PD correlation analysis in preclinical models of GBM for the second-generation HDAC inhibitor quisinostat.7 Quisinostat was chosen as a promising agent as it has high specificity for HDAC1, a protein that we previously demonstrated is essen-tial for the survival of cancer stem cells present in GBM. 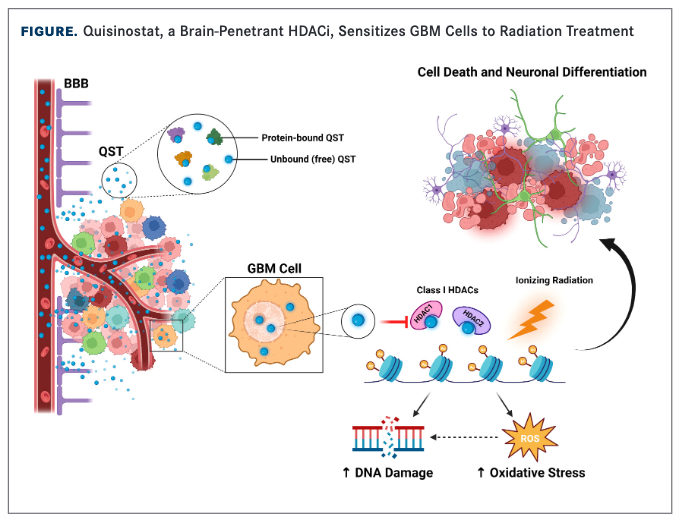 We first conducted preliminary in vitro studies to examine the efficacy of quisino-stat against patient-derived GBM cell lines and found that the agent potently reduced viability of GBM cells at low nanomolar concentrations. Intriguingly, when we examined the molecular consequences of quisinostat treatment in more detail, we found that short-term incubation with the drug resulted in extensive accumulation of DNA damage in GBM cells. The longer the incubation period with quisinostat, the greater the amount of DNA damage to cancer cells.

Because quisinostat acts as a DNA-damaging agent, we next questioned whether it could enhance the effects of radiation, which is the mainstay of GBM treatment.3 In other solid tumors, there is evidence that HDAC inhibitors can radio-sensitize cancer cells.8-12 We hypothesized that the accumulation of DNA damage induced by quisinostat in combination with radiation treatment would synergistically reduce GBM cell viability. Indeed, we found that quisinostat robustly synergized with radiation treatment across multiple GBM cell lines.

The killer experiment was to determine whether quisinostat could cross an intact BBB. To address this question, we treated mice with quisinostat short-term and subsequently collected their plasma and brain for matched PK and PD analyses.

It is worth noting that while PK analyses are sometimes performed in preclinical trials for a variety of different brain tumors, these studies typically only measure the total brain-to-plasma concentration ratio as a measure of drug-brain penetra-tion.13-15 However, the value of this ratio is rather limited and may lead to erroneous conclusions as it does not consider the protein- or lipid-binding fraction of drug in the plasma and the brain.16

We employed a method called equilibrium dialysis to measure the unbound, or “free,” drug concentrations which represent the pharmacologically active fraction of a drug. We found that although total levels of quisinostat were abundant in the brain, only a very small fraction of the drug was unbound. Nevertheless, these low concentrations were sufficient to induce robust target modulation (PD response) in brain tissue.

After establishing that quisinostat is indeed a BBB-penetrant drug, we subsequently assessed its efficacy by treating tumor-bearing mice with either quisi-nostat, radiation or a therapy combining the two. While quisinostat alone did not provide a survival benefit, when combined with radiation, all animals lived significantly longer compared with radiation monotherapy. To the best of our knowledge, this is the first report demon-strating that quisinostat can act as a potent radiosensi-tizer in any preclinical cancer model.

The identification of drugs that can enhance the effects of radiation treatment is an intense area of research within the field of neuro-oncology. Here, we provide the first report that quisinostat is a brain-penetrant HDAC inhibitor with potent radiosensitizing properties in preclinical models GBM. Our findings also have impor-tant implications for the management of other malignancies—such as prostate, colon, lung, and esophageal cancer—wherein HDACs are frequently overexpressed and where radiation is commonly used as a treatment modality.17,18 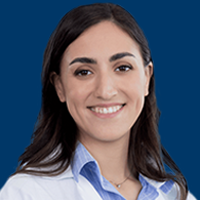