The Rationale to Combine Prexasertib With LY3300054 in Ovarian Cancer
News > 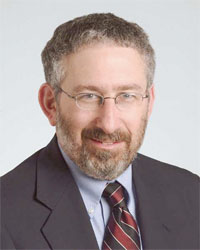 Several variables are important to consider when undergoing preventive surgery for ovarian cancer, including familial history and age, according to Maurie Markman, MD. In an interview with OncLive, Markman, national director, Cancer Treatment Centers of America, discusses appropriate timing for prophylactic bilateral oophorectomies, the impact of surgery on a patient's life, and the age at which surgery may be appropriate in this setting.

OncLive: Can you tell us a little about the timing of risk-reducing bilateral salpingo-oophorectomy (BSO) in BRCA heterozygotes?

Markman: The question that I was asked was about when would be the most appropriate time to consider a prophylactic bilateral oophorectomy in a woman who doesn't have ovarian cancer, but has a known BRCA mutation. There is, first of all, overwhelming evidence that the performance of this procedure will reduce the lifetime risk of ovarian cancer somewhere in the order of about 80%. In addition, there is more recent evidence to suggest that not only does it reduce the risk of ovarian, but it also reduces the risk of all causes of death by approximately 70% or 80%.

That finding is important, because one would certainly say, "Well isn't it great to reduce the risk of ovarian cancer?” Of course the answer is yes, but what about the negative aspects of removal of the ovaries in premenopausal women? Might there, for example, be an increased risk of death from heart disease because of the lack of estrogen now? There may be a risk of osteoporosis, and then pelvic fractures, and then pelvic fractures lead to complications, and that might lead to death. Looking at overall mortality is also a very important question, in addition to the question of the risk of ovarian cancer. Again, let the data show that the risk of ovarian cancer is reduced, as is the risk of premature death, and that is very striking.

When do you recommend a surgery or procedure like that be performed?

There's less definitive data there. The general recommendation today from a variety of expert groups would be somewhere between the age of 35 and 45. Obviously, the later the better, from the perspective of issues of surgical menopause, which is certainly not an insignificant concern from the perspectives of the loss of estrogen for a woman. As I said, there’s also heart disease, heart problems, osteoporosis, and the psychosocial and vaginal dryness perspectives. There are a lot of issues that are potentially very significant. They should not be downplayed. So this would be good somewhere between 35 and 45.

The other important point is that there's increasing evidence now that BRCA1 and BRCA2 mutations are really quite different, both in terms of the lifetime risk of cancer and, in the case of the question I was asked, timing. So, it’s about when those cancers seem to appear, and there's pretty good evidence that BRCA2 mutations do increase the risk of ovarian cancer, but before the age of 50, it's very uncommon. The percentage of BRCA2 mutations leaving ovarian cancer before the ages of 40 or 50 is probably about 1% or less, whereas at age 50, it might be 10%. Women with BRCA1 mutations, 10% of them may develop ovarian cancer by the age of 50. Therefore, it's not unreasonable to suggest to a woman with a known BRCA1 mutation at age 35 that it is a reasonable time to talk about a performance of that procedure, and for a woman with BRCA2 abnormality, perhaps age 45, it is not an unreasonable recommendation. Obviously I'm not giving medical advice, and I'm certainly not saying I know the individual patient, but those are reasonable considerations for the woman, her family, her advisors, and for her doctors who are advising her.

Say a 30-year-old patient comes in. Do you definitely avoid that direction?

I should add that when I talk about the issue of surgery—and of course a woman who doesn't have cancer because we're not talking about cancer right now—an important point is the issue of if she's already had a child. Has she said now at this point that she's had her family? That's a very personal question. At 27 or 28, if she says she finished childbearing, the negative aspect on doing the procedure that early would simply be that that's a lot of years of surgical menopause, number one. Number two is that if we knew her family history was such that she actually had members of her family that had cancer that early, then other than that, it probably wouldn't be needed that early.