Checkpoint Inhibitors in Second and Third-line 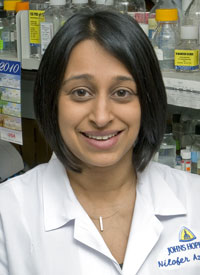 Nilofer S. Azad, M
Nivolumab (Opdivo) demonstrated a 24% overall response rate (ORR) among patients with a range of non-colorectal cancers (CRCs) with mismatch repair deficiency (dMMR) who were identified through the NCI-MATCH trial, according to preliminary clinical trial findings reported at the 32nd SITC Annual Meeting.

Overall, 8 of 34 patients achieved a response for a 24% ORR (95% CI, 11%-41%); all were deemed partial responses (PRs) although there were 2 unconfirmed complete responses. “We did meet our primary endpoint,” Azad said. “…Of note, we had 5 more patients who had unconfirmed responses. Two of those patients remained on study at the time of data cutoff, so these response numbers may change as the study matures.”
... to read the full story
To Read the Full Story
REGISTER
LOG IN