Dr. Agarwal on the FDA Approval of Olaparib in HRR-Mutant mCRPC
News > 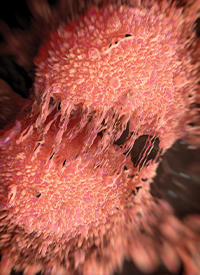 In January 2016, the FDA granted olaparib (Lynparza) a breakthrough therapy designation as a treatment for patients with BRCA1/2 or ATM-mutated mCRPC who have received prior taxane-based chemotherapy and at least either enzalutamide (Xtandi) or abiraterone acetate (Zytiga). The decision is based on findings from the phase II TOPARP-A trial, which demonstrated that olaparib had a nearly 90% overall response rate in a subgroup of patients who had DNA-repair defects.

Additionally, there is an ongoing phase III trial (NCT02987543) investigating olaparib versus enzalutamide or abiraterone acetate in patients with mCRPC who have failed prior treatment with a new hormonal agent and have homologous recombination repair gene mutations.