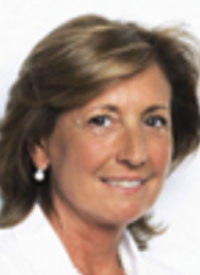 Nicoletta Colombo, MD
The combination of cediranib and olaparib (Lynparza) improved progression-free survival (PFS) in patients with platinum-resistant ovarian cancer (PROC), although the difference from chemotherapy did not achieve statistical significance, a randomized trial showed.1

Continuous treatment with the VEGF inhibitor cediranib and the PARP inhibitor olaparib led to a median PFS of 5.7 months as compared with 3.1 months with weekly paclitaxel. The difference represented a 24% decrease in the hazard for disease progression or death but did not significantly distinguish itself from paclitaxel (HR, 0.76; 90% CI, 0.49-1.17; P = .29). The combination appeared even more active in patients with germline (g) BRCA wild-type tumors, resulting in a 37% reduction in the hazard ratio versus paclitaxel.

Intermittent therapy with the combination led to a median PFS of 3.8 months, Nicoletta Colombo, MD, of the European Oncology Institute in Milan, reported at the 2019 ESMO Congress.

“The BAROCCO trial included a difficult-to-treat population with a high unmet need: 59% of the patients had received 3 or more lines of therapy and their median platinum-free interval was less than 3 months,” said Colombo. “Although not statistically significant, the continuous administration [of the combination] shows a promising trend for improved progression-free survival, particularly in the germline BRCA wild-type population.

“The continuous administration of cediranib and olaparib is active in platinum-resistant ovarian cancer patients, with a clinical benefit observed in 85% of patients. The regimen was well tolerated with few severe side effects,” added Colombo.

Despite recent advances in the treatment of platinum-sensitive ovarian cancer, PROC continues to represent a high unmet need. The disease is associated with a median PFS of 3 to 4 months with weekly paclitaxel, which is the most effective chemotherapy regimen, said Colombo.

Evidence does exist for PARP inhibitor activity beyond gBRCA-mutant disease when combined with an angiogenesis inhibitor. Cediranib/olaparib led to a fourfold increase in median PFS compared to olaparib monotherapy in patients with gBRCA wild-type ovarian cancer.2 Bevacizumab (Avastin) and niraparib (Zejula) more than doubled median PFS in gBRCA wild-type ovarian cancer as compared with niraparib alone.3

“The combination of cediranib and olaparib may have a synergistic effect,” said Colombo. “Molecular pharmacology studies suggest that cediranib induces downregulation of some genes that are involved in homologous recombination, thus producing a sort of functional BRCAness that favors the selective activity of the PARP inhibitior.”

Investigators assumed a median PFS of 3.4 months with paclitaxel and projected that the combination would reduce the hazard ratio by 49% (3.3-month improvement).

The trial included 123 patients, randomized 1:1:1 to the 3 treatment arms. The groups were balanced with respect to distribution of baseline characteristics. Data were stratified by BRCA status (89% wild-type or unknown), prior antiangiogenic therapy (53%), and prior lines of chemotherapy (three or more, 59% ).

Colombo said 12 patients allocated to paclitaxel withdrew from the study following randomization, leaving 29 for data analysis. Subsequently, 95% to 100% of patients in all 3 groups dropped out, primarily because of disease progression (80%-90%). Three patients in the paclitaxel group withdrew because of adverse events, as did 3 in the continuous-therapy arm and 1 in the intermittent arm.