Dr. Farago on Effectiveness of Single-Agent Lurbinectedin in SCLC

Lurbinectedin functions by inhibiting activated transcription in SCLC, explains Farago. In the past, lurbinectedin has been tested in combination with other chemotherapy drugs, such as doxorubicin and paclitaxel, and has shown some signal of activity in this patient population.

In the trial presented at the 2019 ASCO Annual Meeting, investigators evaluated the use of single-agent lurbinectedin in 105 patients with an ECOG performance score ranging from 0 to 2, who had received 1 prior line of chemotherapy treatment.

Final results from the trial showed a confirmed overall response rate of 35.2% (95% CI, 26.2-45.2), which surpassed the trial’s primary endpoint of at least 30%, says Farago. Compared with what has been observed in other trials with either topotecan or amrubicin, the observed response rate with lurbinectedin is high and very encouraging, she adds.

The key secondary endpoints examined in the trial included median duration of response, median progression-free survival, and median overall survival, adds Farago, which were 5.3 months, 3.9 months, and 10.8 months, respectively. Again, in comparison with other recent randomized studies that have read out, the data are promising and may be suggestive of significant clinical activity.

Although these results are encouraging, Farago cautions that a limitation is that it was a single-arm study. Farago hopes to have randomized phase III trial data on this agent in the future.

Dr. Sabari on the Role of Concurrent Molecular Testing in Lung Cancer 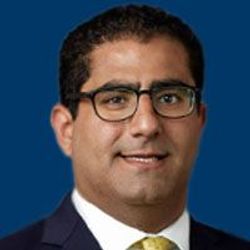 Sabari Stresses the Importance of Molecular Testing in Lung Cancer

Dr. Rizvi on the Implications of the CheckMate-227 Trial With Nivolumab/Ipilimumab in NSCLC