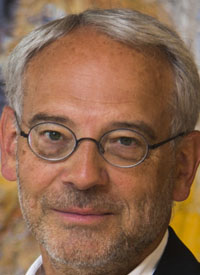 Thierry Conroy, MD
A 4-drug chemotherapy combination dramatically improved survival compared with standard gemcitabine as postoperative therapy for patients with resected pancreatic cancer, according to phase III study findings hailed as a major advance that sets a new standard of care in a challenging disease.

Researchers reporting the findings at the 2018 ASCO Annual Meeting said that mFOLFIRINOX should be the new adjuvant standard of care for those who are fit enough to undergo the chemotherapy combination after surgery.

“The gemcitabine arm is better than in every previous trial but the median [overall] survival we got with the FOLFIRINOX regimen is the best ever achieved in any previous adjuvant treatment,” said lead author Thierry Conroy, MD, a medical oncologist and director of the Institut de Cancerologie de Lorraine in Nancy, France, when discussing the findings during a press conference.

“FOLFIRINOX was more toxic than gemcitabine, but it’s still a safe regimen with manageable toxicities,” he said. “The FOLFIRINOX regimen should be considered the new standard of care after pancreatic cancer resection in patients with good performance status.”

The findings represent “an important significant improvement in overall survival for a notoriously aggressive disease,” said Andrew S. Epstein, MD, who was serving as an ASCO expert. He noted, however, that patients should have a good performance status to be considered for mFOLFIRINOX.

“It would be tempting to give this regimen to anyone after pancreas cancer surgery, but because FOLFIRINOX is a relatively challenging regimen and, as we see, [there are] more toxicities from it compared with single-agent gemcitabine, we need to make sure that we recommend this regimen in the appropriate people—people who are healthy enough to withstand the rigorousness of the regimen,” said Epstein, a medical oncologist at Memorial Sloan Kettering Cancer Center.

Nevertheless, he said, the study findings are welcome news. “This is probably the biggest advance we’ve seen in pancreatic cancer since the introduction of gemcitabine, which is now about 25 years ago,” said Schilsky. “This is a huge step forward, at least for those patients who are able to undergo surgical resection.”

The PRODIGE 24/CCTG PA.6 study involved 493 patients with nonmetastatic pancreatic ductal adenocarcinoma treated at 77 French and Canadian centers from April 2012 to October 2016. It was conducted through Unicancer, a network of comprehensive cancer centers in France and a leading clinical trial sponsor in Europe.

To be eligible, patients were required to undergo surgery and have no tumor residue on a postoperative CT scan. Participants had to be between the ages of 18 and 79 years with World Health Organization performance status scores of ≤1.

Three to 12 weeks after surgery, participants were randomized 1:1 to receive mFOLFIRINOX or gemcitabine for 6 months. The mFOLFIRINOX regimen consisted of oxaliplatin, leucovorin, and irinotecan administered intravenously (IV) at day 1, followed by 5-fluorouracil via continuous IV infusion over 46 hours, for 12 two-week cycles. Gemcitabine was administered via IV on days 1, 8, and 15 every 28 days for 6 cycles.

The value of postoperative chemotherapy with gemcitabine and/or fluoropyrimidine for patients with pancreatic cancer has been established for 10 years, Conroy said. Nevertheless, most patients still relapse within 2 years.

In 2011, Conroy and colleagues demonstrated that FOLFIRINOX is more effective than single-agent gemcitabine as a first-line treatment in the metastatic setting for patients with pancreatic cancer and a good performance status.2 However, Conroy said the toxicities associated with that regimen made it a difficult choice for adjuvant therapy. Instead, investigators designed the trial with mFOLFIRINOX, which does not include bolus IV 5-fluorouracil and is therefore less likely to result in hematologic toxicities and excessive diarrhea.3

In addition to improved median OS, a secondary endpoint of the study, mFOLFIRINOX demonstrated a superior OS rate (63.4% vs 48.6%) and cancer-specific survival rate (66.2% vs 51.2%) compared with gemcitabine at 3 years.

In the gemcitabine arm, the rate of grade 3/4 AEs was higher for thrombocytopenia (4.5% vs 1.3%) and febrile neutropenia (3.7% vs 2.9%). Patients treated with gemcitabine also experienced significantly higher rates of grades 1 to 4 headache, fever, flu-like symptoms, lymphopenia, and transaminase increases. There was 1 toxic death in the gemcitabine arm, Conroy said.

Although the findings show a significant benefit with mFOLFIRINOX, Conroy said single-agent gemcitabine remains an option for patients who have poor performance status scores 12 weeks after surgery, and in those with clear contraindications to the regimen.

Epstein said that the decision would hinge on a patient’s comorbidities. For example, if a patient has neuropathy, he may consider the combination of gemcitabine and capecitabine (Xeloda), which was validated for this population in the ESPAC-4 study last year.4

Next steps for the research include exploring whether mFOLFIRINOX would be beneficial to patients before surgery.