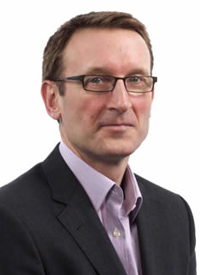 “Tumor PI3K/Akt/PTEN pathway activation, defined as PIK3CA exon 9/20 hotspot mutation or PTEN null by immunohistochemistry, does not appear to affect sensitivity to capivasertib in ER-positive metastatic breast cancer,” he said.

The PI3K/Akt/PTEN pathway is activated in about half of ER-positive metastatic breast cancers. “This is predominantly due to PIK3CA activating mutations but also loss or activation of PTEN, or AKT1 activating mutation,” said Howell. In the preclinical setting, pathway activation leads to ligand-independent activation of ER “and conversely pathway inhibition also leads to a compensatory increase in ER-dependent transcription.” Thus, there is a strong rationale for simultaneous targeting of the PI3K/Akt/PTEN and ER pathways, he said.

Capivasertib is a potent and selective inhibitor of Akt 1-3 isoforms. Synergistic activity with fulvestrant was observed preclinically in both endocrine-sensitive and resistant models2,3 and modest clinical activity has been seen as monotherapy in tumors with Akt1 mutations but not in tumors with PIK3CA-mutated ER-positive metastatic breast cancer.4 No effect of capivasertib was found in the BEECH study when used in combination with paclitaxel in PIK3CA-mutant ER-positive advanced breast cancer5 “but importantly, co-treatment with endocrine therapy was not permitted in that trial,” Howell said.

In FAKTION, 140 postmenopausal women with ER-positive/HER2-negative metastatic or unresectable locally advanced breast cancer recruited from 21 sites in the UK were randomized 1:1 to fulvestrant (500 mg on days 1 and 15 of cycle 1 and day 1 only of subsequent 28-day cycles) plus either capivasertib (n = 69; 400 mg twice daily) or placebo (n = 71), 4 days on/3 days off, until disease progression, unacceptable toxicity, or withdrawal of consent.

Eligible patients had to have progressed on an AI for metastatic/locally advanced breast cancer or relapsed on adjuvant AI. Patients were allowed a maximum of 1 line of prior chemotherapy and up to 3 lines of endocrine therapy for metastatic breast cancer. Prior fulvestrant or any inhibitor of the PI3K/Akt/mTOR pathway was prohibited.