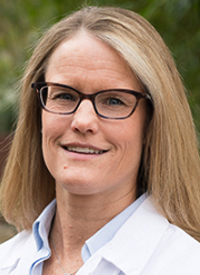 In the phase II GEOMETRY study,1 capmatinib showed an objective response rate (ORR) by independent review (IR) of 67.9% (95% CI, 47.6%-84.1%) in treatment-naive patients with METex14-altered NSCLC. Additionally, in the phase II VISION study,2 the ORR by IR with tepotinib was 58.8% in untreated patients with NSCLC and an METex14 alteration determined by liquid biopsy.

“These are small cohorts of patients; the numbers of frontline patients are relatively small. When trying to parse down some of these data, we do see that response rates are high and are promising,” said ASCO invited discussant Karen L. Reckamp, MD, from City of Hope Comprehensive Cancer Center. “We did see in the second-line setting that responses drop off, which might be due to age and comorbidities. But the numbers are small in the first-line setting. Overall, we need more data.”

MET exon 14 skipping mutations have been identified in approximately 3% to 4% of NSCLC cases and are associated with a poor response to currently available therapies. Prior studies exploring MET inhibition have primarily examined multikinase inhibitors, such as crizotinib and cabozantinib. Both capmatinib and tepotinib, however, are more selective for MET, with IC50 measures of 0.6 nM and 3.0 nM, respectively, as compared with 7.8 nM and 22.5 nM, respectively, for cabozantinib and crizotinib.

The GEOMETRY trial is examining capmatinib across several cohorts, with cohort 4 and 5b selected for presentation at ASCO. Cohort 4 contained pretreated patients with METex14 alterations in the second- or third-line setting (n = 69) while cohort 5b included treatment-naive patients (n = 28). The median age across both cohorts was 71 years, and approximately three-fourths had an ECOG status of 1. In cohort 4, 15.9% of patients had brain metastases compared with 10.7% in cohort 5b. The most common prior therapy used was platinum-based chemotherapy (88.4%).

Approximately half of the patients with brain metastases at baseline experienced an intracranial response with capmatinib (7 of 13; 54%). Of these patients, 4 had a complete resolution of brain lesions (31%). The intracranial DCR was 92.3% (12 of 13).

“Deep responses and duration of response were observed independently of type of MET mutation leading to METex14 or co-occurrence of MET amplification,” said Wolf. “There was high concordance between next generation sequencing [NGS] and RT-PCR in detection of METex14 in tumor tissue.”

Safety was assessed across all cohorts examined in the study, which each included patients with MET dysregulated NSCLC (N = 334). Grade 3 treatment-related adverse events (AEs) occurred in 31.1% of patients and a grade 4 event was seen in 4.5% of patients. Peripheral edema was the most common grade 3/4 event (7.5%) followed by fatigue (3.0%). The most common treatment-related AE of any grade was peripheral edema (41.6%), nausea (33.2%), increased blood creatinine (19.5%), and vomiting (18.9%).