Dr. Fakhri on Ongoing Clinical Trials in CLL
Treatment for Younger Fit Patients With CLL
The Role of Venetoclax + Rituximab in CLL 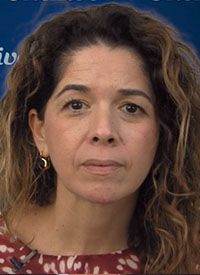 The first-line combination of ibrutinib (Imbruvica) and obinutuzumab (Gazyva) was associated with a 77% reduction in the risk for disease progression or death compared with chemoimmunotherapy in patients with chronic lymphocytic leukemia (CLL)/small lymphocytic lymphoma (SLL), according to data from the phase III iLLUMINATE (PCYC-1130) trial that were presented at the 2018 ASH Annual Meeting.1,2


Results also showed that there was an 85% reduction in the risk for disease progression or death in patients with high-risk CLL who were treated with the BTK inhibitor regimen.

“Ibrutinib [plus] obinutuzumab represents an effective chemotherapy-free treatment regimen for (treatment-naïve) patients with CLL—including importantly, for patients with high-risk features,” said lead study author Carol Moreno, MD, who presented the findings during the meeting. “iLLUMINATE is the first study to prospectively evaluate a chemotherapy-free regimen against chemoimmunotherapy, including a genomically defined high-risk CLL population.”

In October 2018, the FDA granted a priority review designation to a supplemental new drug application for the frontline regimen of ibrutinib plus obinutuzumab in this patient population based on the iLLUMINATE findings. If approved, ibrutinib plus obinutuzumab could become the first chemotherapy-free, anti-CD20 combination available in the United States for the first-line treatment of patients with CLL/SLL.

The international, open-label, randomized, phase III iLLUMINATE trial randomized 229 patients 1:1 to receive 420 mg of continuous ibrutinib daily plus 1000 mg of obinutuzumab split on days 1-2, and on days 8 and 15 of cycle 1, and day 1 of the subsequent 28-day cycles for 6 cycles; or 0.5 mg/kg of chlorambucil on days 1 and 15 of each 28-day cycle for 6 cycles plus the obinutuzumab regimen.

To be eligible for enrollment, treatment-naïve patients were ≥65 or <65 years of age with a Cumulative Illness Rating Scale (CIRS) score >6, creatinine clearance (CrCI) <70 mL/min, and/or del(17p) or TP53 mutation. The median age was 71 years (range, 40-87) and 65% of patients had high-risk genomic features. Fifty-two percent of patients overall had either Rai III or IV disease, while bulky disease was in 27% of ibrutinib-treated patients and 38% of patients who received chlorambucil therapy.

“While single-agent ibrutinib provides a PFS rate of 74% at 4 years, the combination of ibrutinib/obinutuzumab offers another option to achieve long-term PFS,” said Moreno, a senior staff member, Department of Hematology, of the Hospital de Sant Pau i Santa Creu, Autonomous University of Barcelona in Barcelona, Spain.

Ibrutinib combined with obinutuzumab also led to an improvement in ORR and complete response (CR) or CR with incomplete bone marrow recovery (CRi) rate when assessed by IRC and investigator assessment. In the IRC assessment, the ORR and CR/CRi rates were 88% and 19% with ibrutinib/obinutuzumab versus 73% and 8% with chlorambucil/obinutuzumab, respectively. The ORR and CR/CRi rates via investigator assessment were 91% and 41% versus 81% and 16%, respectively.

In the high-risk population, Moreno noted that the IRC-assessed ORR rates with ibrutinib/obinutuzumab and chlorambucil/obinutuzumab were 90% and 68%, respectively; the CR/Cri rates were 14% and 4%.

Ibrutinib combined with obinutuzumab also showed a prolongation in time to next treatment. The median has not been reached in either arm (HR, 0.06; 95% CI, 0.02-0.18; P <.0001) versus the comparator arm, yet results showed a 94% reduction in the risk for needing second-line therapy with the ibrutinib regimen. Moreover, salvage treatment for patients with relapsed disease was needed in 4% of patients on the ibrutinib arm compared with 44% of those on the chemoimmunotherapy arm.

The safety profiles were consistent with AEs expected with each agent alone. The most frequent AEs reported in the ibrutinib and chlorambucil arms during the AE period—defined as time from the first dose until 30 days after the last dose of treatment or initiation of subsequent antineoplastic therapy—were neutropenia (43% with ibrutinib vs 63% with chlorambucil), thrombocytopenia (35% vs 25%), diarrhea (34% vs 10%), cough (27% vs 12%), IRRs (25% vs 58%), arthralgia (22% vs 10%), pyrexia (19% vs 26%), anemia (17% vs 25%), and nausea (12% vs 30%). Obinutuzumab dose was interrupted due to IRRs in 6% of patients on ibrutinib versus 30% of those on chlorambucil.

The FDA approved ibrutinib as a frontline treatment of patients with CLL in March 2016; the agent was previously approved by the FDA for patients with CLL, pretreated mantle cell lymphoma, and Waldenström’s macroglobulinemia.