Dr. Lockhart on Strategies for Targeting the RAS/RAF/MEK/ERK Pathway in CRC

Dr. Lockhart on Next Steps for Regorafenib and TAS-102 in mCRC
Conference Coverage > 2019 Gastrointestinal Cancers Symposium > 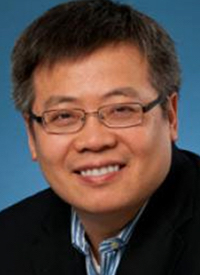 The combination use of durvalumab (Imfinzi) and tremelimumab plus best supportive care prolonged median overall survival (OS) by 2.5 months compared with supportive care alone in patients with advanced refractory colorectal cancer, according to phase II study results presented at the 2019 Gastrointestinal Cancers Symposium.

Previously, treatment with immune checkpoint blockade therapy had not proven to be effective in refractory colorectal cancer except in patients with mismatch repair deficiency, Chen explained. However, the researchers hoped that targeting both PD-L1 with durvalumab and CTLA-4 with tremelimumab would have additive and/or synergistic activity as their mechanisms are nonredundant. In addition, a previous phase Ib study showed that the 2 agents could be combined safely.

A total of 180 patients with advanced refractory colorectal cancer and an ECOG performance status of 0 or 1 were randomized 2:1 to durvalumab plus tremelimumab with best supportive care or best supportive care alone. Eligibility criteria included patients with measurable disease for which all available standard regimens, such as bevacizumab (Avastin) and regorafenib (Stivarga), had failed¾meaning that an EGFR inhibitor must have been used if the patient had RAS wild type disease. No prior therapy with PD-1/PD-L1 or CTLA-4 inhibitors was permitted.

Both arms received at least 1 prior systemic therapy, including 155 patients who had prior VEGF-targeting therapy, and 65 who had prior radiotherapy. All patients with RAS wild type colorectal cancer in the active treatment arm and 83% in the control arm were previously treated with cetuximab (Erbitux) or panitumumab (Vectibix).

All subgroups evaluated in the study also demonstrated superior OS with the doublet regimen, including those by primary tumor location and BRAF and RAS (KRAS, NRAS) status. In the 166 patients with microsatelite stable disease, the HR for OS was 0.66 (90% CI, .49-.89; P = .024) in favor of active treatment.

At baseline in the active treatment arm and the best supportive care arm, median patient age was 65 years and 64 years, respectively. In addition, 62% and 77%, respectively, were male, and liver metastases were present in 67% and 77% of patients. ECOG performance status was 1 in 72% of patients in both arms. The primary site of disease was left colon plus rectum in the doublet arm (73%) and the control arm (67%). The majority of patients in the active treatment arm and the control group had KRAS mutations (78% vs. 49%, respectively), NRAS mutations (2% vs. 16%), and BRAF V600E mutations (7% vs. 11%).

Overall, 169 patients had baseline blood samples available for molecular analysis, and 168 had successful circulating tumor DNA assessment based on baseline blood. Sequencing was performed using a 500-gene panel with 93.7% sensitivity and 99.2% specificity for detecting microsatellite instability. One patient in each arm had microsatellite instability-high/mismatch repair-deficient tumors.

Of the 103 patients evaluable for response in the active treatment arm, 1 patient (1%) experienced a partial response and 26 (22%) had stable disease. In the 46 evaluable patients in the best supportive care arm, 4 (7%) had stable disease as a best response. In the intent to treat population, the disease control rate was superior for the active treatment arm (odds ratio [OR], 4.16; 90% CI, 14.-12.3; P =.006). This superiority was consistent when the researchers restricted the analysis to patients with evaluable disease.