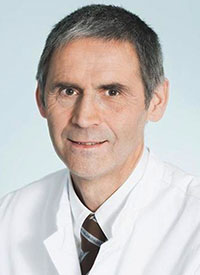 A regimen of avelumab (Bavencio) and cetuximab (Erbitux) plus oxaliplatin, leucovorin, and 5-fluorouracil (5-FU; mFOLFOX6) in patients with RAS/BRAF-wildtype metastatic colorectal cancer induced a very high response rate but did not meet its primary progression-free survival (PFS) end point.

In the single-arm phase II AVETUX study, the overall response rate (ORR) to the regimen was 81%, but the 12-month rate of PFS was only 40%,1 which missed the target of 57%, the trial investigators reported at the 2020 Gastrointestinal Cancers Symposium. Further, translational data showed a decline in circulating tumor (ct)DNA early in the course of treatment, “mirroring the high rate of early tumor response,” but the reason that the high ORR and sharp and early decline in ctDNA did not correlate with PFS is unknown at present, study co-author Meinolf Karthaus, MD, of Neuperlach Clinic in Neuperlach, Germany, said during a presention of the data in poster format.

Patients were started on treatment with weekly mFOLFOX6 and cetuximab, with avelumab 10 mg/kg added on day 1 of cycle 2 for up to 18 months. All were continued until secondary resection, disease progression, or toxicity. The median number of treatment cycles was 8 for oxaliplatin, 13 for 5-FU, 12 for cetuximab, and 16 for avelumab. The median duration of cetuximab and avelumab treatment was 5.4 months (range, 0.7-18.4 months).

Two patients without RECIST lesions were excluded from the response analysis. The 81% (30/37) ORR consisted of 4 complete responses and 26 partial responses. Another 4 patients achieved stable disease, for a disease control rate of 92%.

“The translational data showed correlation of T cells in the tumor and avelumab reaction [fever and tumor lysis] but no correlation between efficacy and standard PD-1/L1 predictors such as T-cell diversification or TILs could be shown,” said Karthaus. “The fever with higher TILs did not translate in this small group to a longer survival.”

“We’ve had a lot of anecdotal phase II studies looking at FOLFOX plus cetuximab and one of the early ones had response rates as high as 80%—but 60% is probably where we would sit looking at the CALGB 80405 data2—which is probably the best aggregation of larger populations of FOLFOX plus cetuximab,” poster moderator Johanna C. Bendell, MD, chief development officer, Sarah Cannon Research Institute/Tennessee Oncology, Nashville, said during the session.

She added that with immunotherapy, 6-month PFS rates may be a better surrogate than median PFS as an indicator of efficacy, she said.

“One thing I think is interesting is the concept of using CD8+ T cells in the tumor as a marker of potential immune response. What we found is that it isn’t necessarily the case in colorectal cancer, in which the CD8+ T cell infiltration doesn’t translate into patients who seem to be doing well,” said Bendell. The best correlate of response therefore remains to be determined.