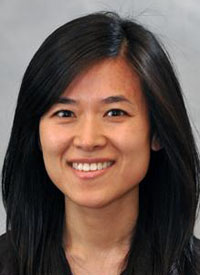 Christina S. Baik, MD, MPH
Upfront testing for BRAF V600E mutations is necessary for patients with non–small cell lung cancer (NSCLC), but if results are positive, physicians are unsure when to administer BRAF/MEK combination therapy—and they must be prepared to manage the associated adverse events (AEs).

“The key is to test these patients. A lot of times, by the time you’ve done EGFR/ALK/ROS1, there is not enough tissue to keep testing these patients,” said Christina S. Baik, MD, MPH, assistant professor at Seattle Cancer Care Alliance, and of the Department of Medicine, Division of Medical Oncology, at Fred Hutchinson Cancer Research Center. “I do think it’s important to test. Combination treatment is active, and the efficacy really does appear to be similar when you give it in the first-line or later-line settings. There are no real data to inform us when to use these drugs, but they should be used at some point during their treatment course.”

While the options aren’t as varied for BRAF V600E-positive patients as they are for EGFR-mutant or ALK-rearranged patients with NSCLC, Baik says they can be treated with a combination regimen of BRAF and MEK inhibitors, now an FDA-approved option with dabrafenib (Tafinlar) and trametinib (Mekinist).

“BRAF is part of the RAS/RAF/MEK pathway and the most obvious target is BRAF, but we’ve learned from the melanoma studies that when we target BRAF, we really need to also target the downstream MET,” she said.

Data have demonstrated the efficacy of both BRAF monotherapy and combination approaches. A phase II clinical trial of 84 patients with stage IV metastatic BRAF V600E–positive NSCLC who were treated with dabrafenib demonstrated an investigator-assessed overall response rate (ORR) of 33% (95% CI, 25-45). Four of 6 previously untreated patients achieved an objective response.2

“It looks active, but the response and efficacy data are not as impressive as what were used to seeing for other targeted therapies,” said Baik on the monotherapy outcomes.

However, the BRAF/MEK combination strategy of dabrafenib and trametinib has shown efficacy for patients with BRAF V600E–positive advanced or metastatic NSCLC and was approved the FDA in June 2017. The European Union approved the combination in April 2017.

With the FDA’s approval, the agency also approved the Oncomine Dx Target Test, a next-generation sequencing (NGS) test, which detects the presence of BRAF, ROS1, and EGFR gene mutations. This is the first NGS oncology panel test the agency has approved for multiple companion diagnostic indications.

In the phase II study that led to the FDA approval, 57 previously-treated patients with NSCLC received 150 mg of dabrafenib twice daily and 2 mg of trametinib once daily. The median patient was 64 years (range, 41-88) and 51% were female. All patients had nonsquamous histology and 73% were current or former smokers.

“It looks active, but the toxicities can be quite challenging for our patients,” said Baik.