The Importance of Targeting RET in NSCLC 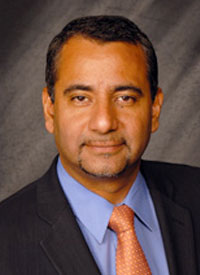 It should be standard of care to use next-generation sequencing (NGS) upfront as well as at the time of disease progression, so that treatment can be tailored to patients with ALK-mutant non–small cell lung cancer (NSCLC) throughout their care, explained Luis E. Raez, MD.

The detection of an ALK mutation should signal the use of an ALK TKI such as alectinib (Alecensa) rather than chemoimmunotherapy, according to Raez. When a patient develops resistance to the drug, repeat testing should be done to identify the optimal second-line therapy.

“Everybody believes lorlatinib (Lorbrena) is the best drug to use [upon progression]. However, [a patient may have] a resistance mutation to lorlatinib that is sensitive to crizotinib (Xalkori); this is why we cannot say that a certain drug is the best choice upon progression,” said Raez.

In an interview with OncLive during the 2020 Winter Lung Cancer Conference, Raez, medical director and chief scientific officer of Memorial Cancer Institute, and chief of Hematology/Oncology at Memorial Healthcare System, provided insight into therapies available to patients with ALK-mutant NSCLC and underscored the role of genetic testing in informing treatment decisions.

OncLive: Could you provide an overview of research on ALK mutations lung cancer?

Raez: Approximately 4% to 5% of Americans have ALK [mutations]; however, many patients have lung cancer—more than 225,000. A significant number of patients carry genetic alterations. [At the 2020 Winter Lung Cancer Conference], I discussed treatments for those with these alterations and presented some clinical cases [faced in practice]. We're very lucky that we have 5 drugs available to treat these patients.

Could you expand on the treatment options available to patients with ALK mutations?

According to our guidelines, alectinib is the preferred agent because it [has central nervous system activity]. When we used crizotinib, patients [will still] develop brain metastases. We use brigatinib (Alunbrig) and lorlatinib to rescue patients.

Could you discuss the utility of repeat testing?

I presented a case of a patient who had 4 resistance mutations. There’s no 1 drug that can be used to rescue that patient. In the future, when liquid biopsies become more widely available, we may be testing more than once. According to the Society of Liquid Biopsy guidelines, we want to test up front, and perhaps at the time of resistance. Patients with ALK mutations [tend to] live 6 to 7 years. I have had patients who have taken all 5 pills [during that time]. That's why it’s so important to educate [patients] about resistance mutations. Not everyone has a resistance mutation. One publication reported that only 24% to 25% of patients have a resistance mutation, but it's very meaningful for the patient [to understand how the presence of such a mutation will impact treatment decisions].