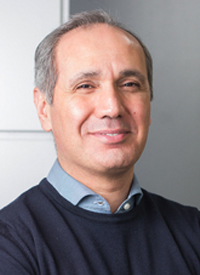 Nizar J. Bahlis, M.D.
In 2019, more than 30,000 Americans are expected to be diagnosed with multiple myeloma, the second most common blood cancer.1,2 The introduction of new medicines, including proteasome inhibitors and immunomodulatory agents over the last decade, has led to significant progress for patients.3 However, despite the advancements in treatment, multiple myeloma remains an incurable disease.3 Patients are likely to relapse and become refractory to treatment over time, and physicians seek new treatment options.3,4

One of the options is DARZALEX® (daratumumab), a monoclonal antibody that targets CD38.5 CD38 is expressed on hematopoietic cells, other cell types and tissues, and is overexpressed on multiple myeloma cells.5 DARZALEX inhibits tumor cell growth through direct on-tumor and immunomodulatory mechanisms of actions.5 DARZALEX may also have an effect on normal cells.5 DARZALEX is approved by the U.S. Food and Drug Administration (FDA) in combination with lenalidomide and dexamethasone, or bortezomib and dexamethasone, for the treatment of patients with multiple myeloma who have received at least one prior therapy.5 The approval of DARZALEX in combination with lenalidomide and dexamethasone (D-Rd) was based on the randomized, Phase 3 POLLUX clinical trial of 569 patients with multiple myeloma who had at least one prior line of therapy.5 The D-Rd arm (286 patients) received 25 mg of lenalidomide on days 1-21 of each 28-day Cycle, 40 mg of dexamethasone per week and 16 mg of daratumumab weekly for Cycles 1-2, every 2 weeks for Cycles 3-6 and then every 4 weeks until disease progression.5

The results showed: More recently, important longer-term follow-up data have become available from the POLLUX study. In fact, data presented at the American Society of Hematology (ASH) Annual Meeting in December 2018 continued to show positive results for DARZALEX when added to a standard of care of lenalidomide and dexamethasone.6

These follow-up data showed that after a median follow-up of 44.3 months in the intent-to-treat (ITT) patient population treated with D-Rd, these patients had a median PFS of 3.7 years (44.5 months) compared with 1.5 years (17.5 months) among patients who received Rd alone (HR 0.44; 95% confidence interval [CI]: 0.35-0.55).6 The post-hoc analysis was not adjusted for multiplicity.6

“We’ve come a long way in the treatment of multiple myeloma in the past decade. But, for those individuals battling this disease, there’s still much more to be done,” said Nizar Bahlis, M.D., Associate Professor, Arnie Charbonneau Cancer Institute, University of Calgary, and Principal Investigator of the POLLUX study sponsored by Janssen Research & Development, LLC. “The addition of DARZALEX to this current standard of care may offer an important option and a way to attack this disease.”