When added to bortezomib and dexamethasone in patients with multiple myeloma, selinexor, an inhibitor of XPO1-mediated nuclear export, improves progression-free survival and overall response rate and reduces the incidence of peripheral neuropathy. 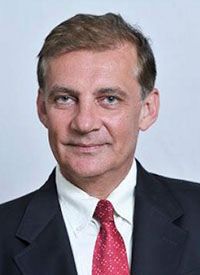 Meletios A. Dimopoulos, MD, professor and chairman of the Department of Clinical Therapeutics at Kapodistrian University of Athens School of Medicine

When added to bortezomib (Velcade) and dexamethasone in patients with multiple myeloma, selinexor (Xpovio), an inhibitor of XPO1-mediated nuclear export, improves progression-free survival (PFS) and overall response rate (ORR) and reduces the incidence of peripheral neuropathy.1

The findings came from BOSTON, the first Phase III study to evaluate the clinical benefit of this drug combination for relapsed/refractory multiple myeloma. Results of the global study were presented May 29 during the virtual scientific program of the American Society of Clinical Oncology (ASCO) 2020 Annual Meeting.

A first-in-class oral drug that reactivates tumor suppressor proteins, selinexor was approved in 2019 in combination with the steroid dexamethasone for heavily pretreated patients with relapsed or refractory myeloma that did not respond to at least two proteasome inhibitors, two immunomodulatory agents and an anti-CD38 monoclonal antibody. Selinexor targets the protein XPO1 (exportin 1), which is overexpressed in myeloma.

The investigators embarked on the BOSTON study because twice-weekly administration of the subcutaneous proteasome inhibitor bortezomib as part of combination therapy is effective but can’t be used for extended periods as it sparks peripheral neuropathy in 50%-60% of patients. Previous research testing selinexor in combination with bortezomib and dexamethasone demonstrated anti-myeloma activity in patients whose cancers were sensitive to proteasome inhibition, the authors noted.

In the BOSTON study, patients received either the selinexor triplet regimen or a doublet of bortezomib and dexamethasone.

The study enrolled 402 adults with ECOG status scores of 0-2 who had previously taken 1 to 3 treatments for myeloma but had never been exposed to a selective inhibitor of nuclear export. Of those, 207 took 1.3 mg/m2 of bortezomib and 20 mg of dexamethasone twice weekly, while 195 took that combination plus 100 mg of selinexor once weekly. In the selinexor arm, researchers lowered the bortezomib dose by 40% and the dexamethasone dose by 25% at 24 weeks.

The median age of participants was 67, with 59.6% older than 65 years, and 57.1% male. Baseline characteristics were balanced across the 2 arms.

When randomized, patients were stratified by the number of prior regimens used and Revised International Staging System stage III (18.5%) vs stages I or II. If participants taking the doublet experienced progressive disease, they were allowed to cross over to either the drug triplet or, if they were intolerant to bortezomib, to selinexor plus dexamethasone.

The primary endpoint of the study was PFS and secondary endpoints included ORR, overall survival (OS), duration of response, and peripheral neuropathy rates and outcomes.

Researchers found that the triplet significantly prolonged PFS compared with the doublet by a median 13.93 months versus 9.46 months (HR = 0.70; P = 0.0075). PFS was improved in all subgroups, including in patients with 17p deletions and those who had previously taken the immunomodulatory (IMiD) drug lenalidomide.

“As lenalidomide is often used in the frontline setting and with daratumumab, having an IMiD-free option in the relapsed setting with a novel mode of action is an important finding from the BOSTON trial,” said the study’s lead author, Meletios A. Dimopoulos, of the National and Kapodistrian University of Athens School of Medicine in Greece.

Using the European Organisation for Research and Treatment of Cancer’s questionnaire QLQ-CIPN20, the researchers found clinically important differences in motor, autonomic, and sensory scales. Peripheral neuropathy rates of grade 2 or higher were significantly lower with the selinexor combination compared with bortezomib plus dexamethasone alone (21.0% vs 34.3%; P = 0.0013).

“Overall, this data indicates that the once-weekly regimen of selinexor plus bortezomib and dexamethasone could be a new standard of care and a most convenient triplet therapy … in patients with multiple myeloma,” he concluded.