Although the efficacy of PARP inhibitors has been established in patients with metastatic castration-resistant prostate cancer in previous studies, the use of these agents earlier on in the disease process has yet to be evaluated. 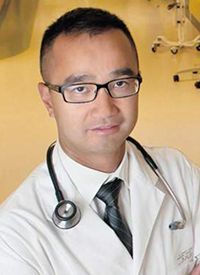 Although the efficacy of PARP inhibitors has been established in patients with metastatic castration-resistant prostate cancer (mCRPC) in previous studies, the use of these agents earlier on in the disease process has yet to be evaluated, according to Kim N. Chi, MD.

To address this knowledge gap, the ongoing phase 3 AMPLITUDE trial (NCT04497844) has launched to evaluate the use of standard androgen deprivation therapy (ADT) plus abiraterone acetate (Zytiga) and prednisone with or without the PARP inhibitor niraparib (Zejula) in patients with homologous recombination repair (HRR) gene–mutated metastatic castration-sensitive prostate cancer (mCSPC).1,2

“Overall, the proven efficacy of olaparib [Lynparza] in CRPC has really opened up a new era of precision oncology for patients with advanced prostate cancer,” Chi said. “However, there is still room to improve outcomes—particularly in those with castration-sensitive disease and particularly in those with HRR-defective disease. The AMPLITUDE study provides an exciting opportunity for us to evaluate the efficacy of PARP inhibitors much earlier on in the disease process.”

In an interview with OncLive®, Chi, a senior research scientist at Vancouver Prostate Centre, chief medical officer, vice president and medical oncologist at BC Cancer, and a professor in the Department of Medicine at The University of British Columbia, discusses the AMPLITUDE trial in and how this research could help inform the use of PARP inhibition in patients with HRR gene–mutated mCSPC.

OncLive®: Can you speak on the current standard of care (SOC) for patients with mCSPC and its evolution?

Chi: For decades, the SOC [for this disease] has been ADT, otherwise known as castration therapy, which can be performed either medically or surgically. Although it is initially effective in most of the patient population, eventually, prostate cancer progresses [and develops] castration resistance; this occurs at a median time of approximately 1 year.

Over the past 5 years, however, intensifying ADT with additional [agents], specifically docetaxel or androgen receptor pathway inhibitors like abiraterone, apalutamide [Erleada], and enzalutamide [Xtandi], has improved progression-free survival [PFS] and overall survival [OS], and has delayed the time to castration resistance. By bringing these treatments [into the mix] earlier, at the time of ADT initiation, OS is improved, with a risk reduction ranging from 30% to 40%.

How does your treatment approach for HRR gene–mutated mCSPC differ from that of wild-type disease?

What was the rationale for the AMPLITUDE trial? What methods are being utilized?

The AMPLITUDE trial is further testing the concept of taking treatments which benefit patients in the mCRPC setting and utilizing them earlier on in the disease process when cancers are still castration sensitive. Patients with a gene alteration in a prespecified list of HRR-associated genes, including BRCA2, are eligible for the study.

On the study, all patients will receive standard therapy with ADT plus abiraterone and prednisone, but they will also be randomized to receive either niraparib, a potent and highly selective inhibitor of PARP, vs placebo.

The primary end point of the study is radiographic PFS, and an important secondary end point is OS. Other end points [are focused on] progression, time to castration resistance, response assessments, and patient-reported outcomes [PROs].

This is an international, multicenter, randomized, double-blind, placebo-controlled trial, which is already accruing.

What do you expect to see in terms of safety outcomes?

We know the adverse effects [AEs] of ADT plus abiraterone and prednisone quite well, as they have been in use for many years. We will be looking for the typical AEs that have been associated with abiraterone, including elevated liver enzymes, which occur in approximately 5% of patients, as well as the effects of increased mineralocorticoids.

With niraparib, like all PARP inhibitors, AEs include myelosuppression, as well as gastrointestinal AEs. We will [also] be assessing PROs and evaluating whether these AEs impact perceived quality of life.

What makes this trial stand out from prior trials that have been done with PARP inhibitors in this disease?

Are any other ongoing trials being done in this disease that are generating excitement? What are some next steps for research in this area?

In the future, there will be trials looking at PARP inhibitors earlier on in the disease process. Just recently, there was a press release that olaparib in combination with abiraterone in patients with mCRPC met its end points, although we are still awaiting details of the results.