Since 2010, several novel therapies have been approved for use in metastatic castration-resistant prostate cancer (mCRPC). Although they have expanded the therapeutic repertoire for clinicians, they also bring a new set of challenges for the optimal clinical management of patients with mCRPC. Data obtained from clinical trials are crucial in determining optimal efficacy and safety of therapies in a controlled setting. However, the trial setting may fail to provide an understanding of the challenges associated with novel therapies. Real-world data obtained from large retrospective studies can also deliver useful insights into the clinical challenges associated with these newer therapies, such as medication adherence and cognitive adverse events (AEs), which may not have been fully explored.The number and availability of oral anti-cancer drugs has increased in recent years. While multiple studies have indicated that the majority of patients prefer oral therapy compared with intravenous therapy, this also shifts a large part of medication adherence responsibility from the clinician to the patient. The linkage between adherence rates and treatment efficacy may have a significant impact on patient outcomes; as such, medication adherence represents an increasing concern for the optimal therapeutic management of patients with mCRPC. Historically, determining adherence to anti-cancer therapies has been difficult to predict, with rates varying widely between 16% and 100%.1

In January 2016, Ajay Behl, PhD, and colleagues presented data on the treatment gaps in patients with mCRPC who were treated with abiraterone or enzalutamide at the 2016 Genitourinary Cancers Symposium.2

Abiraterone acetate, an inhibitor CYP17A1 that blocks extragonadal androgen biosynthesis, and enzalutamide, a direct antagonist of the androgen receptor (AR), are among the next-generation agents most recently approved for use in mCRPC. Both agents are available as oral therapies.

In the retrospective study, investigators utilized the Truven Health MarketScan Research Databases to analyze nearly 3400 patients with mCRPC who were initiated on either abiraterone or enzalutamide therapy. Patient discontinuation patterns were observed until loss to follow-up or data unavailability, and Kaplan-Meier survival curves compared the rates of having a refill gap (Table).2 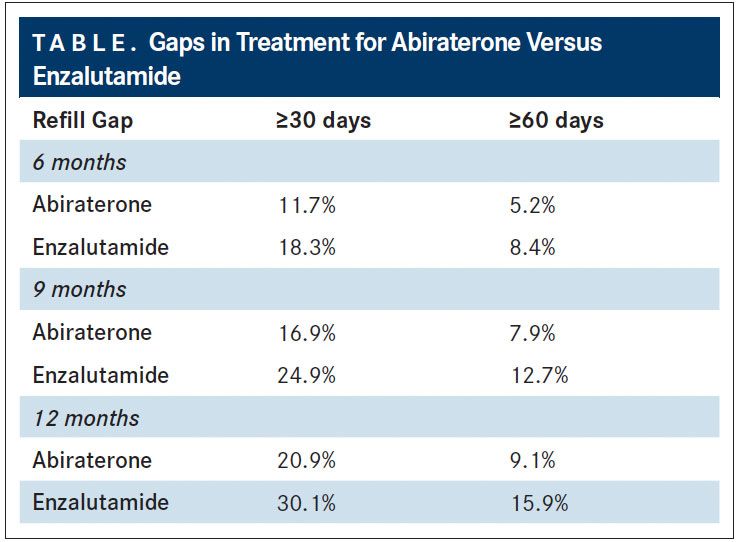 Little additional data are available on the specific adherence rates of abiraterone or enzalutamide. In one US study of patients taking abiraterone acetate plus prednisone, the adherence rate, as measured by the medical possession ratio (MPR), was >90% after 6 months, 9 months, and 12 months.3 A Canadian study found that optimal adherence, as defined by an MPR of at least 80% at 6 months, was achieved by 83% of patients. Nearly 80% achieved an MPR of ≥90%. At 1 year, 82% of patients maintained optimal adherence.4

While these data support that nonadherence to abiraterone is relatively low, additional studies are needed to determine the reasons driving nonadherence with enzalutamide and potential contributing factors. To date, no other specific data exist that have examined the adherence rate of patients receiving enzalutamide. The reasons for oral anti-cancer therapy nonadherence are complex and involve several factors.

A systematic review by Verbrugghe et al5 examined 25 studies to identify some of the associated factors related to nonadherence and nonpersistence with oral anti-cancer therapy. Nonadherence factors included patient-related factors (lower perceived necessity, perception of no benefit with adherence, lower perceived quality of life and concerns about symptoms), therapy-related factors (treatment-related AEs, longer duration of therapy, greater number of prescriptions), disease-related factors (comorbidities), healthcare system factors (duration of follow-up visits, different providers during follow-up, less patient participation in decision making), and social and economic factors (age, out-of-pocket costs).Comparisons of the safety and efficacy of first-generation antiandrogens, such as bicalutamide, against the next-generation therapies, such as enzalutamide, in mCRPC are ongoing. Because bicalutamide and enzalutamide function to suppress AR signaling through different mechanisms, and bicalutamide has the potential to act as an AR agonist, it is necessary to investigate its clinical utility in the setting of mCRPC. However, both clinical safety and efficacy must be addressed when selecting a therapeutic regimen.

Although the TERRAIN trial provided pivotal safety data, the rates of central nervous system (CNS) and seizure events in a nonclinical trial population were unknown. Behl et al7 presented a retrospective study comparing the rates of real-world CNS events in patients treated with enzalutamide or bicalutamide at the 2016 Genitourinary Cancers Symposium.

Although the data are limited, enzalutamide treatment has been associated with a greater incidence of falls in elderly patients (≥75 years) than in younger patients (<75 years) when compared with placebo.8 In a report by Foster and colleagues,9 an in vivo, nonclinical analysis examined the pharmacologic safety of several AR antagonists specifically related to CNS events and any off-target effects. Compared with bicalutamide, enzalutamide was associated with a greater number of convulsions, lower IC50 for gamma-aminobutyric acid (GABA)-A, and higher brain drug concentration associated with convulsion. The GABA-A channel is an established mediator of seizure; the ability of AR antagonists to inhibit GABA-A may be one explanation for the CNS events and seizures that have been reported both in clinical and nonclinical studies.

“The possibility that AR antagonists cause seizure through GABA-A inhibition creates some useful hypotheses relative to the drug safety and side effect profiles of existing and new AR antagonist therapies,” the authors wrote. They added, “Some theoretical negative side effects of GABA-A antagonism could be significantly masked by the beneficial effects of AR antagonist drugs.”9

In a similar observational study by Behl et al,10 the development of CNS events was analyzed in nearly 1067 patients with mCRPC initiated on abiraterone acetate, enzalutamide, or chemotherapy using a large nationwide healthcare claims database. CNS events were significantly less likely to occur in patients who received abiraterone acetate compared with enzalutamide (39.5% vs 46.0%; P =.0036) or chemotherapy (39.5% vs 51.1%; P =.0277) after 12 months. Using a multivariate adjustment, patients in the abiraterone acetate cohort also had a significant reduction in the hazard of having a CNS event compared with the other treatment cohorts (20% vs enzalutamide; P = .0388).

At least 1 additional prospective phase II study will address potential cognitive effects of abiraterone and enzalutamide in patients with mCRPC.11

The development and approval of next-generation androgen inhibitors for mCRPC has significantly broadened the selection of therapies for clinicians and provided additional options for patients that improve clinical outcomes. Ongoing studies in the real-world setting will be necessary to elucidate adherence rates and AEs outside of the clinical trial setting, and should help to shed light on the optimal therapeutic management of patients with mCRPC.