For all the positive data associated with PARP inhibitors in patients with epithelial ovarian cancer who have known BRCA mutations and despite several agents winning FDA approval over the past few years, PARP inhibitors aren’t curing patients.

For all the positive data associated with PARP inhibitors in patients with epithelial ovarian cancer who have known BRCA mutations and despite several agents winning FDA approval over the past few years, PARP inhibitors aren’t curing patients, Leslie M. Randall, MD, MAS, said at the 2019 SGO Annual Winter Meeting.1

These agents aren’t appropriate for all patients, she added. A little over 50% of patients with high-grade serous biology have the high-risk homologous recombination deficient (HRD) phenotype.

“I did a presentation for survivors at MD Anderson and patients understand this disease almost as well as we do,” said Randall, associate professor in the Division of Gynecologic Oncology at the University of California in Irvine. “There was a woman who stood up in the audience and said, ‘This BRCA thing is great and these PARP inhibitors are great, but what about me? What do I do?’ For these patients, it's really important to tease out these pathways and alternate therapies.”

The most important and best studied antiangiogenic mechanisms of action in ovarian cancer are the VEGF pathway and VEGF pathway receptor. Treatments targeting these pathways have been evaluated in multiple phase III trials and have consistently demonstrated a progression-free survival (PFS) benefit. However, these agents have not been shown to improve overall survival.

The current antiangiogenic in the pipeline is cediranib, a potent small molecule pan-VEGF receptor tyrosine kinase inhibitor. It has been shown to improve PFS in women with measurable platinum-sensitive relapsed high-grade serous or endometroid ovarian, fallopian tube, or primary peritoneal cancer when used in combination with olaparib (Lynparza).

In the primary analysis performed in March 2014 after 47 PFS events, the median PFS was 17.7 months for the women treated with the combination compared with 9.0 months for those treated with monotherapy (HR, 0.42; P = .005).

Ninety patients were enrolled in the phase II study and were randomized in a 1:1 ratio to olaparib, 400 mg twice daily, or the combination of cediranib, 30 mg/day, and olaparib, 200 mg twice daily. High-grade tumors of other histologies were allowed if patients carried a known deleterious germline BRCA1/2 mutation. Treatment continued with imaging every 8 weeks until disease progression by RECIST v1.1 criteria. PFS in the intent-to-treat population was the primary endpoint.

Based on these results, Liu and her team initiated the confirmatory randomized phase III NRG-GY004 (NCT02446600) trial. The expected primary completion date is December 2019.Data from phase I pooled expansion cohorts showed that mirvetuximab soravtansine (IMGN853), a folate receptor alpha-targeting antibody-drug conjugate, induced a confirmed overall response rate (ORR) of 30% (95% CI, 22%-39%) in patients with platinum-resistant ovarian cancer who had received 1 to 3 prior lines of therapy.3

Patients were selected from 3 expansion cohorts of an ongoing phase I trial (n = 113), including 36 who met the eligibility criteria for FORWARD I, a pivotal phase III study comparing mirvetuximab soravtansine versus investigator’s choice of chemotherapy. Patients were eligible for FORWARD I if they have platinum-resistant disease, medium-to-high levels of folate receptor alpha (FRα) expression, and 1 to 3 prior lines of therapy.

In a phase I expansion study, mirvetuximab soravtansine demonstrated a confirmed ORR of 26% (95% CI, 14%-41%) among 46 patients with FRα-positive platinum-resistant ovarian cancer, including 1 complete and 11 partial responses.4

In results from the FORWARD II trial presented at the 2018 ASCO Annual Meeting, the combination of mirvetuximab soravtansine and bevacizumab (Avastin) induced an ORR of 43% with a median PFS of 7.8 months among 51 patients with platinum-resistant FRα-positive ovarian cancer. In a subset of 39 patients who received <3 prior lines of therapy and had medium to high FRα expression, the ORR was 39% and the median PFS was 9.5 months.5

Randall said cost remains a concern when discussing novel drugs and novel drug combinations. But the drugs in the pipeline appear to be effective. “We have every reason to have hope,” she said. 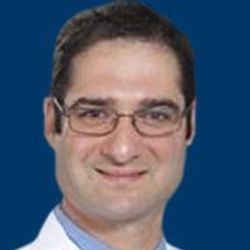