Atezolizumab with or without radiotherapy did not demonstrate efficacy in patients with advanced squamous cell carcinoma of the penis.

Atezolizumab (Tecentriq) with or without radiotherapy did not demonstrate efficacy in patients with advanced squamous cell carcinoma of the penis, according to results from the phase 2 PERICLES trial (NCT03686332) presented at the 2022 American Society of Medical Oncology Genitourinary Cancers Symposium.1

The PERICLES trial investigated whether immunotherapy would be effective against advanced squamous cell carcinoma of the penis based on preclinical data suggesting patients had high rates of intratumoral CD8 T cells and 40% to 60% PD-L1 positivity. Patients in 1 of the 2 arms of the study were also to receive radiotherapy to control locoregional lymph node disease. 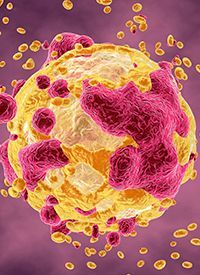 According to de Vries, his institution ran 2 previous studies in this setting. A trial of neoadjuvant chemotherapy with docetaxel, cisplatin, and 5-fluorouracil was judged to have high toxicity and early relapses, with 23% of patients discontinuing treatment.2 A trial of chemoradiation resulted in less toxicity and better PFS than the chemotherapy, but this study was not restricted to advanced-stage disease.3 Neither trial included patients with distant metastases.

All patients had stage IV disease with an inoperable primary tumor and a World Health Organization performance status of 0 or 1. Patients were allowed to have received any previous treatment besides immunotherapy; only 25% had no prior treatment. The percentage of patients with distant metastases was 59%.

In addition to the primary end point of PFS of 35% or greater at 1 year (to exclude 15%), there was a secondary end point of 2-year overall survival rate in both arms combined.

The median PFS was 2.5 months with no significant difference between the treatment arms.1 Patients with PD-L1 positivity, as well as those who were positive for human papilloma virus (HPV), showed slightly higher PFS. “It’s interesting here to notice that the 2 patients in arm B who responded well to treatment were both PD-L1 positive and high-risk HPV-positive,” de Vries said in his presentation.

Response to treatment was evaluated according to RECIST1.1 with 12-weekly scans of the abdomen and thorax. While some durable responses and complete responses (CRs) were observed, including 2 patients with pulmonary metastases achieved CRs, overall response rates were low. Out of 30 evaluable patients in both arms, there were 7 (23%) partial responses (PRs) and 3 (10%) CR. In the radiotherapy arm (n = 18), there were 6 PRs and 2 CRs, while there was only 1 PR and 1 CR in the arm that received atezolizumab (n = 12).

Despite some evidence of antitumor activity from atezolizumab, the trial did not meet its goals. The combination with radiotherapy did not improve outcomes of immunotherapy, though de Vries noted that a more optimal radiotherapy schedule might increase efficacy. De Vries suggested that further investigation could assess not only the biomarkers associated with improved response but those linked to resistance to the treatment.

“We also saw in this trial an incomplete immunological activity and early resistance to atezolizumab… and we’re currently looking at pre- and on-treatment biopsies to see if there are other biomarkers for response and which combination therapies would be best to overcome this resistance,” de Vries said. “So while there is still a lot of work to be done, we’re quite enthusiastic about immunotherapy for the treatment of advanced penile cancer.”