The enriched chimeric antigen receptor (CAR) T-cell therapy bb21217 improved responses and also prolonged duration of response (DOR) compared with non-enriched CAR T cells in patients with relapsed/refractory multiple myeloma, according to results of a phase I escalation and expansion study (NCT03274219) that were presented during the 2020 ASH Annual Meeting. Additionally, the percentage of senescent CAR T cells decreased in the presence of the enriched CAR molecule (CAR+), called bb21217, according to investigators.

The primary end point was safety and secondary end points were response, progression-free survival (PFS), minimum residual disease (MRD), and CAR+ T-cell expansion and persistence. In the presentation, lead investigator Melissa Alsina, MD, presented data on 69 patients who had a median follow up of 5.8 months.

The median number of prior regimens was 6, including 97% receiving lenalidomide (Revlimid), 94% receiving a CD38 antibody, 93% receiving pomalidomide (Pomalyst), and 91% receiving bortezomib (Velcade). Eighty percent of patients were double refractory and 64% were triple refractory.

“Regarding safety and tolerability, the most common adverse event [AE] was grade 3/4 cytopenias,” said Alsina, an associate professor of medicine in the Blood and Marrow Transplant Program and head of the Multiple Myeloma Transplant Program, both at Moffitt Cancer Center in Tampa, Florida. “These were not dose related,” she added.

Median time to recovery for grade 3/4 neutropenia and grade 3/4 thrombocytopenia was 2.0 months and 2.2 months, respectively. Grade 3/4 infection was reported in 26% of patients, with 1 death from infection reported within 6 months, but in the absence of disease progression.

There were 2 deaths reported within 8 weeks of the bb21217 infusion, both attributed to cytokine release syndrome (CRS).

Time to onset for neurotoxicity was 7 days (range, 1-24) and median duration was 2 days (range, 1-188). “Cases of neurotoxicity were rare and observed in 16% of patients for any grade neurotoxicity,” Alsina said. Two grade 3 events were observed: 1 case of encephalopathy occurring with grade 5 CRS and 1 case of dizziness/vertigo that resolved within 48 hours. One grade 4 encephalopathy was reported. The patient was treated with tocilizumab, corticosteroid, and cyclophosphamide.

The objective response rate (ORR) was reported as 68% with a stringent complete response (sCR)/CR of 29% and a very good partial response (VGPR) of 25%. Median time to first response was 1 month.

Alsina noted that midway through enrolling patients for the 450 × 106 dose level, there was an update in the manufacturing process of the CAR T cells. The update required enrolling an additional 29 patients in the expansion phase of the trial. “When these patients were evaluated, we noted an ORR of 84% and an sCR/CR rate of 32%. Prior to this change, the ORR was 68%,” she said. The incidence of AEs, including all grades and ≥ grade 3 CRS and neurotoxicity, were similar between the 2 manufacturing processes.

The phase I study has completed enrollment and follow-up is ongoing.

Dr. Schmidt on the Utilization of Bispecific Antibodies in Myeloma 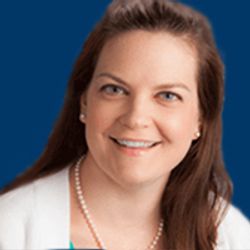