The treatment paradigm for chronic lymphocytic leukemia has expanded beyond continuous treatment with BTK inhibitors with the addition of the time-limited regimen of venetoclax plus obinutuzumab. 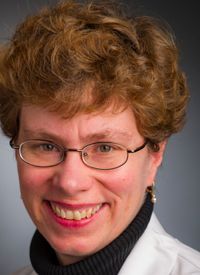 The treatment paradigm for chronic lymphocytic leukemia (CLL) has expanded beyond continuous treatment with BTK inhibitors with the addition of the time-limited regimen of venetoclax (Venclexta) plus obinutuzumab (Gazyva), according to Jennifer R. Brown, MD, PhD.

Several experimental combinations are also under exploration, she added, which may serve to further improve progression-free survival (PFS) for some patient subsets.1

“Continuous therapy is appealing for older patients who want to minimize clinic visits. Ibrutinib [Imbruvica] has significant toxicities, especially in older patients, but the second-generation covalent BTK inhibitors are demonstrating improved safety profiles,” noted Brown. “Some data suggest that continuous therapy with BTK inhibitors may be preferred over time-limited venetoclax/obinutuzumab for those with p53-abberant disease, but time-limited therapy is appealing for younger patients, those with high out-of-pocket costs, and maybe for those with IGHV-mutated disease, as they might achieve particularly durable remissions.”

In a presentation delivered during the 25th Annual International Congress on Hematologic Malignancies, Brown, director of the CLL Center at Dana-Farber Cancer Institute and a professor of medicine at Harvard Medical School, further discussed key developments in the frontline treatment of patients with CLL.

Ibrutinib is the BTK inhibitor for which the longest follow-up data are available. Five-year follow-up data from the phase 2 RESONATE-2 trial (NCT01722487) comparing frontline ibrutinib with chlorambucil in patients with CLL/small lymphocytic lymphoma (SLL) showed that the PFS and overall survival (OS) benefits achieved with the BTK inhibitor were sustained.2

“There was no benefit from adding rituximab and they were both significantly better than BR in terms of PFS,” noted Brown. “Although this was primarily driven by outcomes in the higher-risk IGHV-unmutated population.”

Similarly, in the phase 3 ECOG-E1912 trial (NCT02048813), patients with untreated CLL/SLL were randomized between ibrutinib/rituximab and fludarabine phosphate, cyclophosphamide, and rituximab (FCR) and the former regimen proved to result in a significant PFS improvement over the latter regimen. The 3-year PFS rates in the IGHV-unmutated patients in the investigative and control arms were 89% vs 65% (HR, 0.28; 95% CI, 0.17-0.48; P <.0001), respectively.4 No statistically significant difference in PFS was observed in the patients with IGHV-mutated disease (P = .086).

“We do know that the lower-risk, younger, fit population can experience prolonged PFS with FCR, as shown in long-term follow-up data from investigators at The University of Texas MD Anderson Cancer Center, German randomized trials, and an Italian retrospective study,” said Brown. “Fifty-five percent of patients with IGHV-mutated disease were still in remission at 12 years after therapy.”

In an effort to build on the benefit achieved with FCR, investigators decided to evaluate the addition of ibrutinib to the regimen in younger, treatment-naïve patients with CLL as part of a single-arm, multicenter, phase 2 trial (NCT02251548).5 The best response of undetectable minimal residual disease (MRD) in the bone marrow was achieved in 84% of patients, including all risk groups.

“The regimen was well tolerated,” noted Brown. “Similar data have been obtained with ibrutinib with FCR and obinutuzumab. All [regimens] are highly effective for young, fit patients with IGHV-mutated disease based on MRD achievement, which is better than FCR alone, although we’re waiting for longer-term PFS data.”

Although ibrutinib has demonstrated survival benefit in this patient population, it is not without toxicity. To improve on these benefits, next-generation BTK inhibitors such as acalabrutinib (Calquence) and zanubrutinib (Brukinsa) have since entered the treatment landscape. “[These agents are] significantly more specific than ibrutinib,” noted Brown. “Zanubrutinib is intermediate and acalabrutinib is the most specific of the 3 covalent BTK inhibitors.”

Mature results from the phase 2 ACE-CL-001 trial (NCT02029443) showed that the 48-month event-free survival (EFS) rate with acalabrutinib in the treatment-naïve cohort of patients with CLL was 90% (95% CI, 82%-94%).6 “Importantly, EFS here includes discontinuation of drug for an AE,” noted Brown. “In fact, only 6% of patients discontinued for an AE and most remained on drug, which is important for the longest-term remissions with continuous BTK inhibition.”

In the phase 3 ELEVATE-TN trial (NCT02475681), investigators examined acalabrutinib vs acalabrutinib/obinutuzumab vs obinutuzumab/chlorambucil in older patients with treatment-naïve CLL. At a median follow-up of 28.3 months, the cohorts who received the BTK inhibitor alone or in combination with obinutuzumab experienced a significant improvement in PFS per independent review committee assessment over the cohort that received obinutuzumab/chlorambucil, with HRs of 0.20 (P <.0001), 0.10 (P <.0001), and 0.49, respectively.7

High-level results from the phase 3 ELEVATE-RR trial (NCT02477696), which is comparing acalabrutinib with ibrutinib in patients with previously treated, high-risk CLL, showed that the second-generation BTK inhibitor met the primary end point of noninferior PFS vs ibrutinib.8 Moreover, acalabrutinib was found to have a statistically significant lower incidence of atrial fibrillation vs ibrutinib. “We’ve yet to see the data and look forward to learning more later this year,” said Brown.

Zanubrutinib was compared head-to-head with ibrutinib in the phase 3 ASPEN trial (NCT03053440) in patients with Waldenström macroglobulinemia.10 At a median follow-up of 19.4 months, results indicated that the rate of atrial fibrillation was much lower with zanubrutinib vs ibrutinib, at 2% vs 15%, respectively. “Trends for improvement in hypertension, edema, and contusion [with zanubrutinib] was also observed,” noted Brown. “There is more neutropenia seen with zanubrutinib but it’s generally readily manageable with growth factors.”

These agents are also under exploration in a head-to-head trial that is being performed in patients with relapsed CLL, added Brown.

Data from the phase 3 CLL14 trial (NCT02242942) showed that the combination of venetoclax and obinutuzumab reduced the risk of disease progression or death by 67% vs obinutuzumab/chlorambucil in patients with treatment-naïve CLL and coexisting medical conditions (HR, 0.33; 95% CI, 0.25-0.45; P <.0001).11 The data led to the May 2019 FDA approval of the doublet for use in this population. The 4-year PFS rates in the investigative and control arms were 74.0% vs 35.4%, respectively.

“A number of studies have demonstrated that patients with CLL and high-risk features had higher MRD growth rates, not surprisingly and not dissimilar from what we saw in the chemoimmunotherapy era, where patients who achieved undetectable MRD with, for example, unmutated IGHV experienced recurrence more commonly and more rapidly than patients with mutated IGHV, who we saw have very prolonged remissions,” Brown explained.

Additional data from the trial indicated that patients with mutated IGHV had a better PFS following 1 year of treatment with venetoclax/obinutuzumab vs those who were unmutated.12 “It does not mean that this is not necessarily a good therapy for patients who have unmutated IGHV,” noted Brown. “If they achieve a long remission off therapy, that’s nonetheless, a substantial benefit.”

In a phase 2 trial (NCT02756897), investigators evaluated the combination of ibrutinib and venetoclax in previously untreated, high-risk, older patients with CLL. After receiving treatment for up to 24 months, the rate of undetectable MRD in the bone marrow was 69% after 18 cycles of treatment.13

A novel triplet regimen comprised of obinutuzumab, ibrutinib, and venetoclax was evaluated in patients with treatment-naïve (n = 25) or relapsed/refractory (n = 25) CLL as part of a phase 2 trial (NCT02427451).15 Fifty-six percent of patients who were treatment naïve had undetectable MRD vs 44% of those with relapsed/refractory disease. “Obviously, this was better than a 2-drug regimen,” noted Brown.

Three-year follow-up data indicated that the PFS rates at 36 months with the triplet were 95% in both subsets. At 36 months, the OS rate in those who were treatment naïve was 95% vs 100% in those who had relapsed/refractory disease. “In the treatment-naïve cohort, that’s perhaps not as notable, but in the relapsed/refractory cohort, that is rather notable in terms of durability,” said Brown.

In another phase 2 trial (NCT03580928), investigators examined another triplet regimen comprised of acalabrutinib, venetoclax, and obinutuzumab as frontline treatment in 37 patients with CLL.16 At cycle 16, the rate of undetectable MRD in the bone marrow was 75.0%, while it was 87.5% in the blood. “This is very high,” said Brown. “Follow-up is not yet long enough to comment on PFS.”

In the phase 2 BOVen trial (NCT03824483), the combination of zanubrutinib, obinutuzumab, and venetoclax is under evaluation in patients with untreated CLL.17 “This is actually MRD-guided therapy. Interestingly, most patients did achieve undetectable MRD rapidly, and in fact, have stopped therapy after a median of 10 months,” concluded Brown. “The duration of time that they were treated is shorter than most of the other studies. It will be interesting to see how that affects PFS down the line.”