bTACE Plus Lenvatinib and MWA Produces Responses, Tolerability in HCC 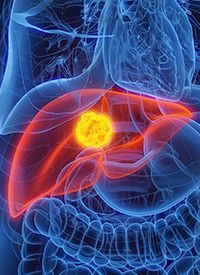 The findings were presented in a poster session at the symposium, with research led by Zhimei Huang, MD, of the Sun Yat-sen University Cancer Center, in Guangzhou, China.

Per modified RECIST criteria, the trial reached its primary end point with an objective response rate (ORR) of 93.02% (n = 40), with 26 complete responses and 14 partial responses. Moreover, they observed a down-staging rate of 83.7% among the entire study group, with 8 patients achieving a complete response without MWA.

The researchers also looked at 18 samples of peripheral blood mononuclear cells (PBMC) from patients given bTACE and low-dose lenvatinib. Looking at the variation of systemic immunity after treatment, they observed among the myeloid populations a decline of CD11b+CD33+HLA-DR–myeloid-derived suppressor cells after treatment (P < .05). They then observed an increase in activated CXCR5+CD8-positive and CXCR5+CD4-positive T cells after treatment (P < .05). Both observations provided the basis for the researchers’ conclusion that the use of this combination impacted both innate and adaptive anti-tumor immunity in patients with large HCC.

Of the 43 evaluable patients in the trial, the median age was 58 years (range, 50-65), and most were male (39 vs 4). Forty-two patients had an ECOG performance status of 0 compared with just 1 patient with an ECOG score of 1. Patients with large HCC on the trial had to have 3 or fewer tumors that had a diameter of 7 cm or greater at Barcelona Clinic Liver Cancer (BCLC) stage A/B. On the trial, 27 patients had BCLC stage A disease vs 16 patients with BCLC stage B disease. Of these, most of the patients’ disease was considered Child-Pugh class A vs Child-Pugh class B at 95.35% vs 4.65%, respectively.

At the time of data cutoff, 18 patients remain enrolled in the phase 2 study as they look toward possible expansion of the trial.